OK. I've had one hour of sleep since 6:30 yesterday morning. I'll tell you a little bit about this weekend and then I'm going to bed. We were debriefed after dinner this evening, and given guidelines on what we can share. Sorry that the link to the news story didn't work yesterday. I think I've fixed that.

The lack of sleep is only because I had to work last night- not because of the forensic project.

Here I am with Matt of the Field Museum of Chicago and Frank from Michigan State, both PhDs and experts in various plant fields. 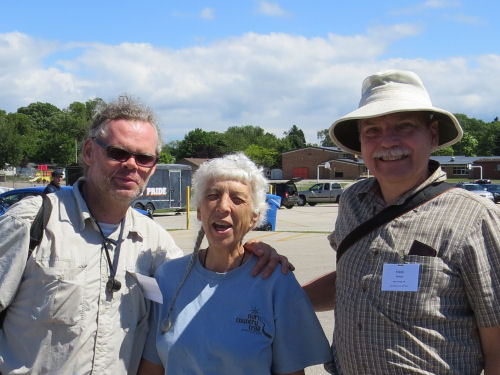 The story in brief- two years ago a 4-month old baby was taken by her father in the midst of dispute with the mother. Three hours later the father showed up without the now infamous "Baby Kate." She has never been found. The father is currently serving a sentence for criminal confinement, but the police would like to be able to charge him with murder. But what everyone really wants is just to know the truth about "what happened to Baby Kate."

There are only a couple of exact locations the father was known to be in those three hours. However, as part of the evidence collected from his shoes the police thought they would try to match local soil types. It turned out there were fragments from nine different plants on his shoes that were much more interesting than the soil. Here's where it gets like a TV show. It would be very unusual for all nine of those plants to grow in the same place. One of the sedges likes acid soil and another alkaline. There were three types of moss on the list. Two are acid-lovers and the third is rather rare. So began a process whereby a number of experts volunteered more time to suggest places in the county where acid/alkaline margins might be identified. These were the locations we searched. We are not supposed to disclose those exact locations.

We were searching for these nine species of plants, with an emphasis on the six most unusual. We also aren't supposed to speculate on findings from the weekend. But, obviously, the grids where we did not find the key six will have a lower priority for further investigation.

Also, the police explained that the plants are only some of 14 pieces of information they have about where the father went. Slowly but surely they are narrowing down the possible places he could have been to in the missing three hours.

The two days were an amazing collaboration of law enforcement personnel. City police, the Sheriff's Department, State Police, Department of Corrections, the National Forest Service, almost all the county fire departments (almost all volunteer) had roles. The Salvation Army and Red Cross provided food and EMT support. Local churches provided vans and drivers to transport the botanical volunteers. (We did have to apply to be one of the searchers, and I don't know how many applicants there were, but I know that a number of people were not accepted. The people who came were from all over the state, and even farther away.) The whole event was coordinated logistically by Mason County Emergency Management.

I may have more to say about the plants another day. It was totally awesome and the plant species have been released to the media so we are allowed to share. We could not take pictures on these two days, but I asked, and they don't care if I return to the sites and do some personal botanizing, as long as I don't disclose the exact locations.

I learned SO much. Made new friends. Had a blast. Maybe made a difference. I am tired but completely satisfied.

Email ThisBlogThis!Share to TwitterShare to FacebookShare to Pinterest
Labels: forensics

What an interesting post, Sharkbytes, and I hope you catch up on your rest.

'Tis a great thing you guys are doing. I wish the police much luck in solving this case.

Now that was an interesting hunt, it's amazing what can be gleaned from nature - I am sure I am not the only one that watches a tv programme and says well that can't be such a place that plant does not grow in such abundance there :)

Interesting and exciting story. You probably searched near Dead Mule Swamp, but you're not allowed to tell.

I didn't find a link in the previous post, but did an online search and easily found the story. It must be quite satisfying to play a part in solving this complex mystery.

How wonderful! Joan of Shark, CSI.

how fascinating. Hopefully this will lead to answers

WOW! That is really cool, Sharkey! It is amazing at what they are doing to solve this case. I sure hope they do and this can be put to rest once and for all. That is really something that you were a part of this team!! You are such an interesting lady, Shark. :)

What an exciting and worthwhile thing to do. Hope you are rested by now. And hope you have helped solve the mystery in this very sad story.