In Memory of the Brainless Pearl

I'm such a fool for dogs. It's even tough when my friends' dogs die. And several of us all got pups around the same time, so the past year or so has been a general time of loss. First to go was Mattie, the wonderful German Shepherd that owned my friend Ester. See Ester, the Shark, and the Zoo.

Then, of course, Maggie left in March.

Today, friend Irene said goodbye to Pearl. Pearl was unique. She was happy, happy, happy, and when she wasn't happy, she was dreaming about being happy. You could not dissuade Pearl from wanting to play and smile and enjoy the now, even if you wanted to be in a funk, or rest or stay clean or just be grumpy. And when a large Golden Retriever wants to be happy... well.

And it was unclear whether Pearl was mentally capable of being anything else. She seemed brainless and undeterred from her quest to be happy. And yet, Irene says, "I always figured it took an idiot to be purely happy; after all, even a dog's life has some harsh realities. but then again, occasionally the idiot would do something so smart, that I always wondered about her brain."

She was a thin and ungainly puppy. I took this picture of her in 2002. 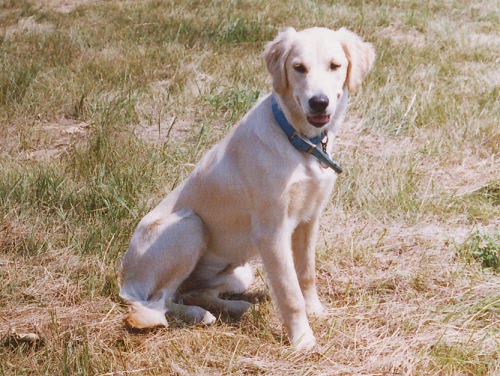 She grew into a massive, wiggly dog who knew how to intrude herself into any situation and make her presence an issue. Here she is, stopping the train. 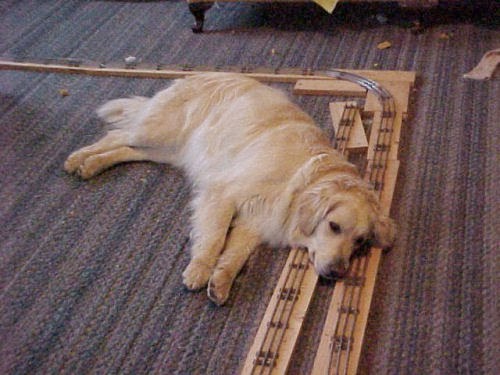 I didn't take this last picture. It's the one Irene chose to send to those of us who got the notice. It's Pearl at her happiest, if one could say there were degrees of her joy. Irene says, "Such a typical moment for Pearl, soaking wet with a stick in her mouth. Absolutely everything was her favorite, but tops among them was swimming." 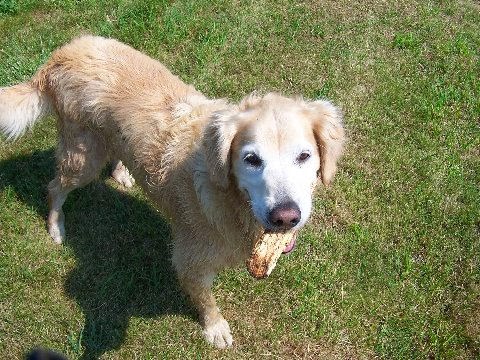 Pearl's fast demise was quite a shock, as Irene's other dog is older and everyone assumed Sandy would be the first to go.

For the best picture of Pearl, with Sandy, and another human friend, Lois, see Close Friends

Posted by Sharkbytes at 9:36 PM

Happiness is a Golden Retriever, no doubt. May the memories of the joys Pearl brought into her life give Irene comfort and peace.

hello sharkbytes its dennis the vizsla dog hay i am sorry to heer abowt yore frends dog pearl run free pearl and do a lot of swimming in the cool layks on the other side of the rainbo bridj!!! ok bye

Pearl does look like a very happy dog. Hugs to Pearls family.

Awwww, that's sad. I'm sorry that your friend lost such a sweet dog. :(

It's always so sad when they go. I well up even thinking about our last dog whom we lost nearly twenty years ago when he was only 8 human years old. Give Irene lots of hugs when you can.

RIP Pearl. You sound like you were one of the greats.