I promised you a surprise. Well, at least something interesting. I certainly was surprised, and I have no answers about what I saw, only questions.

This occurred at the Ludington Hydroelectric Pumped Storage Project. I've talked about it before, but here's a brief review. This picture is looking down from the road to lake level. You can see a paved area down there with a large blue building and an overhead track crane near the middle. 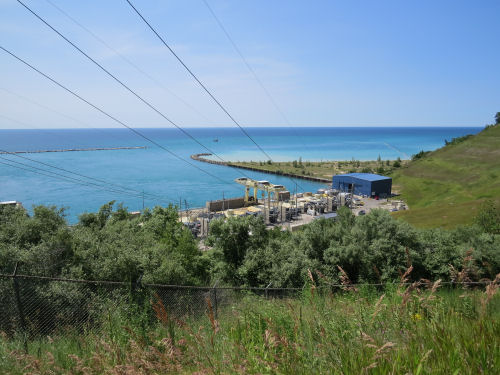 Next is a shot from the same position but looking uphill across the road. At the top of the hill is the huge reservoir they built to hold water which is pumped up from Lake Michigan at night when electricity demand is low. Underground, angled just beneath the surface are six penstocks-- huge pipes-- where the water flows back downhill during the day, and then through turbines to create electricity. 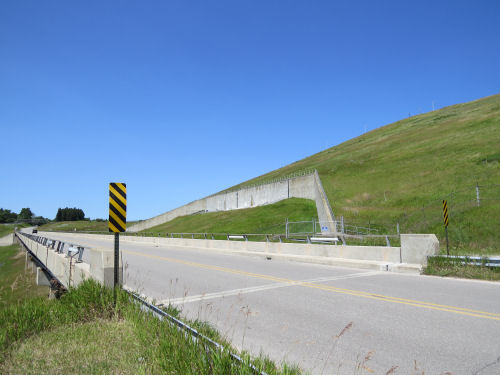 The turbines and control room are all underground. I took a tour once and actually got to stand inside one of the huge turbines. (They shut one down at a time for regular service.) Then the water is discharged back to Lake Michigan.

Here's a picture from the opposite end in a different season, apparently before the blue building was put up. I am using it because it clearly shows six large disks in the paved area. There are six penstocks and six turbines, but I know the turbines are vertical. However, they must be aligned with those disks. 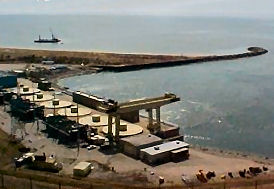 So, here's the shocking new fact. Those disks are removable covers! As I watched, the hoist on the crane began to lift one of them. It was like watching a sci-fi movie. 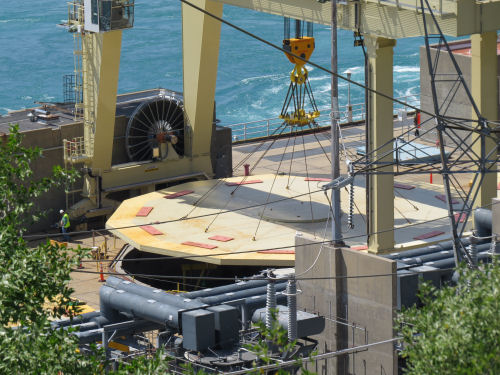 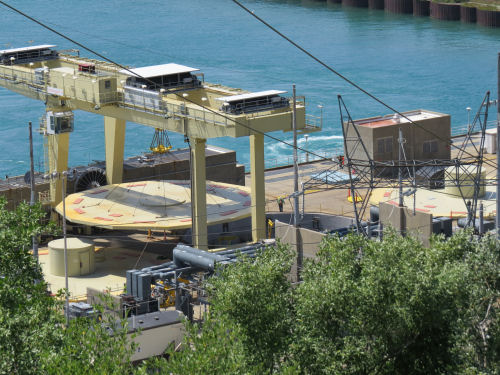 Then the crane moved south on its track and took the disk lid right off the hole. It deposited it on top of that round bunker-like structure with the door in it. 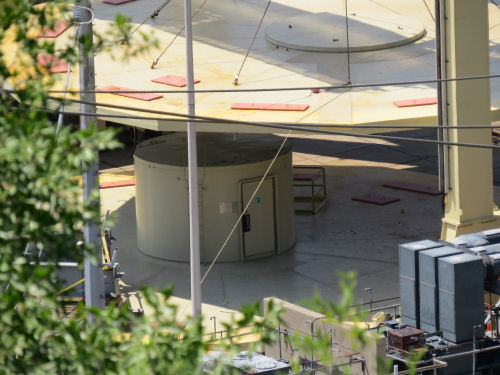 I stood there and waited quite a few minutes to see what would happen next, but nothing did that I could see. Two workmen came over and peered in like little boys watching frogs in a pond, but then they moved away. There is one man in this picture for scale. 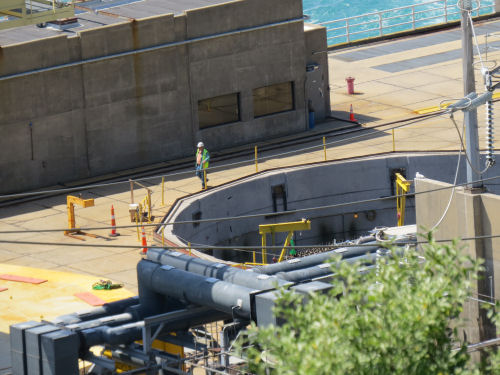 I can see two yellow things that might be cranes inside the hole, but that's about all. Are they getting ready to clean and service this turbine/penstock? I had no idea the whole thing could be opened to the weather like that. In all the times I've driven by here, stopped to look at it, watched basically nothing happening, I've never seen this. Why isn't there a hole in the middle of the disk? It looks like the other disks all fit around one of those bunkers with the door. And in the picture from a different year, they all have that. Is the roof of the bunker just enough larger that it catches in the middle of the disk and lifts off with the rest of the disk? I can't tell because other stuff obstructs the view of the center of the open hole. Maybe the bunker lowers itself on some sort of elevator mechanism.

When they were building it (1970 ish) we used to stop on the way home from church each week to see the progress. It was really interesting to see all the engineering that is now buried underground.

Seems to me the whole thing somehow defies the law of conservation of energy or something. But then I never got farther than a survey of physics.

Now I am curious, too.

A very impressive feat of engineering.

To our friend, Vanilla: This results in a negative gain of energy. (More energy spent in pumping and generating than is generated.) The beauty is that pumping is done in off-peak hours. That water is then used to generate electricity during peak-demand periods.

Now if someone can devise a scheme to store energy from wind-power, it would be a lot more attractive than it is now.

How interesting. It does leave a lot of unanswered questions though. You don't ever have to worry about getting behind at my blog. I know you always catch up when you have time. :)