I went to a delightful children's puppet show this afternoon, the story of Rikki-Tikki-Tavi. I wanted to see it because there was supposed to be a variety of puppet types, and the technical aspects of puppets interest me.

Here's a long shot of the set, the puppet theater, so you can understand the staging. Here, Rikki-Tikki-Tavi (the mongoose) makes friends with the boy, Teddy. Rikki-Tikki is a hand puppet, and the operator could change from the narrator to the boy simply by wearing the mask or not. 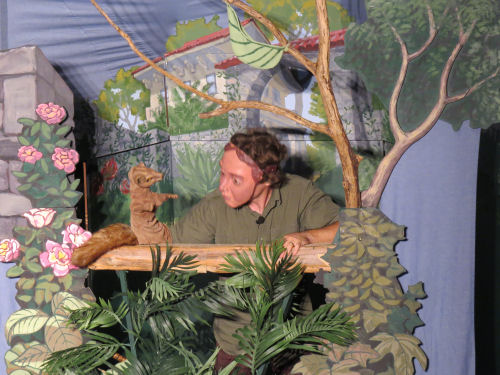 Here is Darzee the Tailor Bird. The cobras eat one of the bird's babies. Darzee was a puppet on a stick whose mouth could open or close. 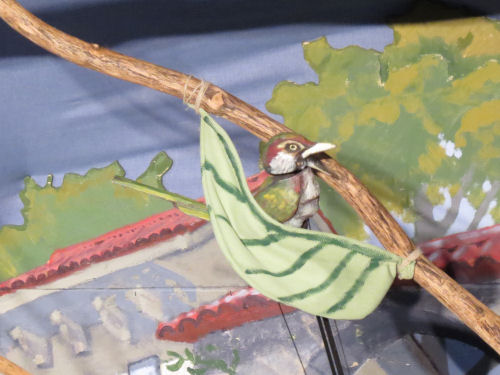 The two cobras, Nag and Nagaina discuss what they will do since Rikki-Tikki has now destroyed their eggs. (The story was re-written to some extent, and the timeline changed, so that only one human character was needed, plus the narrator.) The snakes were stick manipulated with an articulated jaw and a hood that could spread. The bodies were probably rubber, as they could coil around easily and look quite realistic, although I thought their faces were too cartoon-ish and not evil enough. 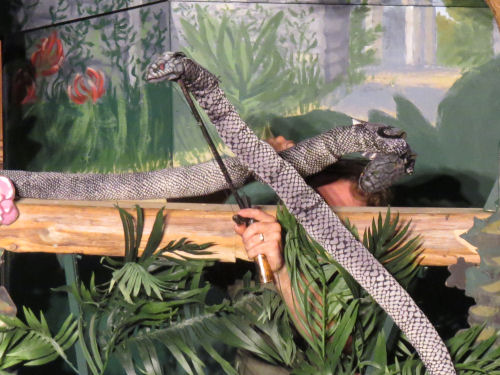 Rikki-Tikki-Tavi and Nag face off for a fight to the death. 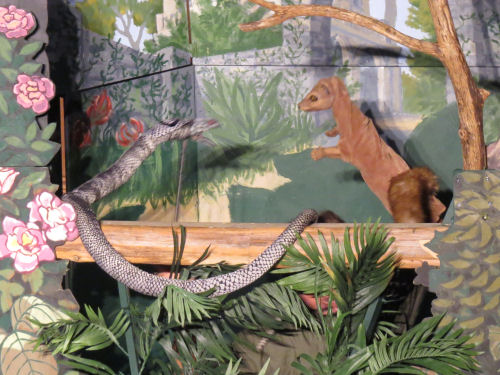 I thought the puppeteer was quite skilled, and the play believable, even though you could often see his hands. The kids in attendance had no problem with this. I watched them a fair amount too, to see how they were following the story.

Here's my take on that. Although they paid attention well, and called for Nag in unison when Nagaina requested it, I don't think the 120-year old story (Rudyard Kipling, 1894) translated well to the world-view being taught today.

The kids often giggled when the snakes were talking to each other, and some seemed to be sorry for Nag when Rikki-Tikki killed him.

And here is the clincher. Afterwards, I overheard two college-age boys discussing the play. One asked, "Why was it OK for the mongoose to kill the cobra's eggs, but not OK for the snake to kill the bird eggs?"

In this day and age of having respect for life forms of all kinds (although I'm betting these kids will gladly kill a mosquito), the reality of cobras being an ever-present deadly threat to a family living in India has been lost. The reason the story was meaningful to children and adults in the past was because there were real dangers near at hand, and of course people were going to value animals who protected them above those who sought to harm.

I missed the very beginning (wrote the time down wrong), but I think, sadly, this story would probably need introduction to help today's children relate. Perhaps that was done. I just don't know.

Literature from other ages is always valuable, but sometimes we need to educate ourselves or an audience to understand it.

I would have loved the puppet show, even if they could have improved things a bit. I liked the story when I was a kid, and I remember the cartoon. A few people I know from that area of the world have told me that cobras are still a very real threat at times.

Good point. A story sometimes has to be understood by knowing the historical and cultural background or context.

Anything that looks that "snaky" is more than evil enough for me.

I think your analysis is correct, but chops to the performers for bringing a classic into the twenty-first century.

hello sharkbytes its dennis the vizsla dog hay dada sez that wen he wuz littel he yoozed to watch the kartoon of this and it skayrd him haff to deth!!! tho he kept watching it of korse!!! ennyway i think that meens it wood be way too skarry for me yoo ar verry brayv to watch it live and in persun!!! ok bye