A Walk Along the Tennessee River


Loretta had to work today and the place I was planning to go is only open on weekends, so I hunted up some other trails. It turns out there is a fairly extensive trail network on the Tennessee Valley Authority land associated with Wilson Dam at Florence. The river here is wide and beautiful. 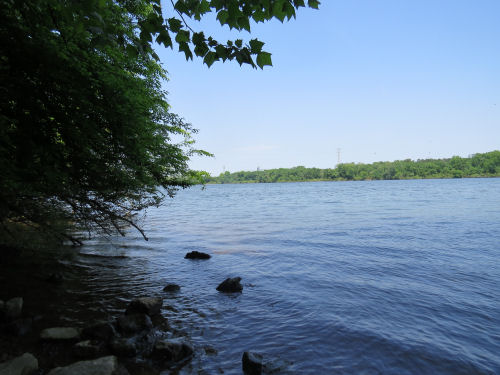 The Rockpile Trail is mostly at the top of the rocky bluffs along the river that I don't have a picture of yet. Of course, the hiker has to get up there! 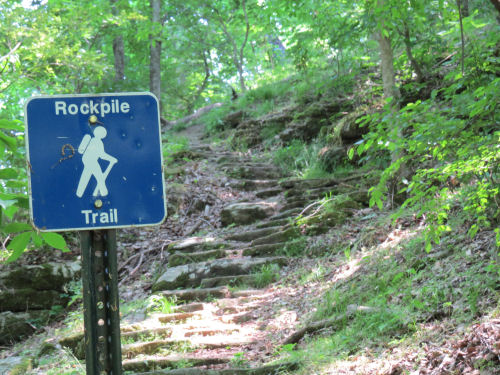 There were a lot of ups and downs, but some sections were just a pleasant stroll (through the poison ivy). 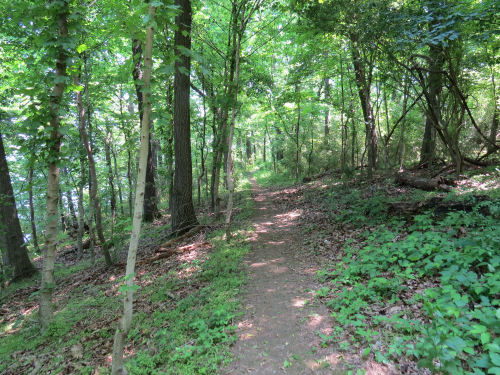 The biggest trail surprise was a place where there is a deep bay at the edge of the river. The trail comes down to water level and crosses the mouth on a concrete bridge that is used as a fishing pier. There was a man there catching crappie. He said I should go back the way I came and there was a trail that stayed above the head of the bay. I asked him if the bridge connected with the trail on the other side. He said it did, but I'd have to go uphill to get back to the other trail. I told him I'd have to go uphill even if I turned around. I said I wanted to go to the dam, and asked if the trail went on that way. He said he thought it did, but he'd never walked to it. (By now, I was less than a mile from the dam!) 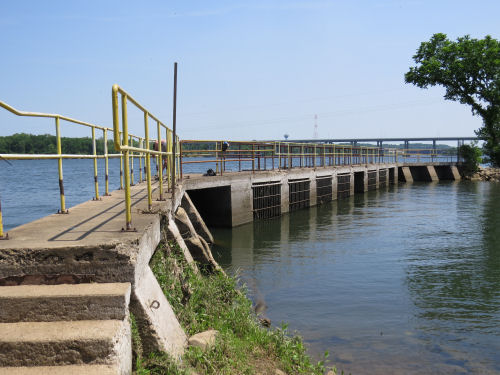 I went on, and got back up to the main trail with no problem, but thought perhaps I'd reached an alternate Oz. There were red brick steps and above them a red brick trail! 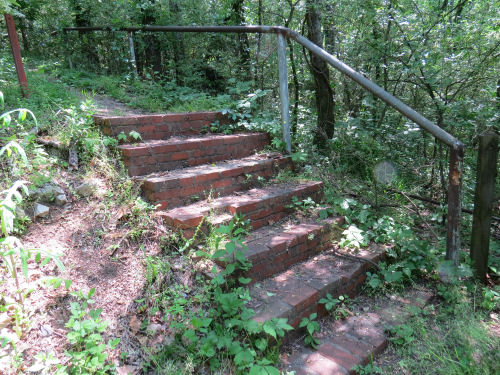 Finally, I made it to Wilson Dam. I showed you this four years ago, the last time I was here. This time, I want you to find the pile of rocks below the dam, just left of the center of the picture. 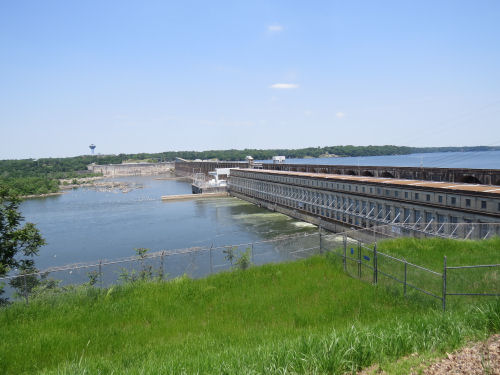 The rocks are always covered with white pelicans, cormorants, and great blue herons. Look at the relative sizes. 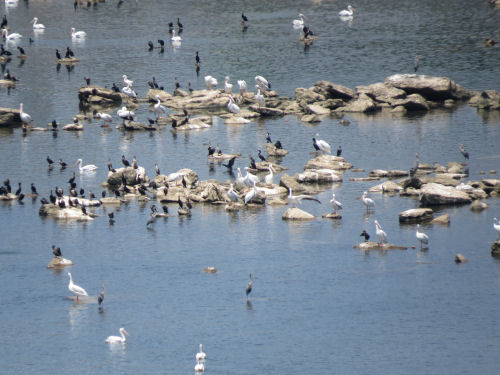 I really love the pelicans. This may be my best picture of them yet, even though they are so far away. 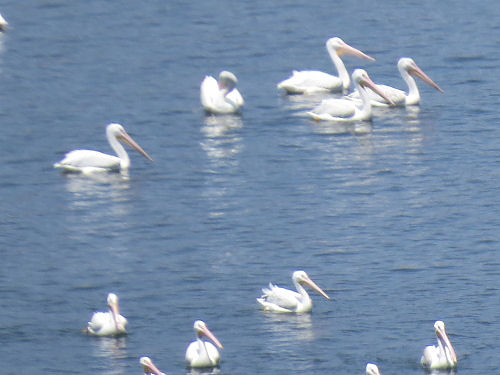 They have a nine-foot wingspan, much larger than the herons. And those black feathers only show when they fly. 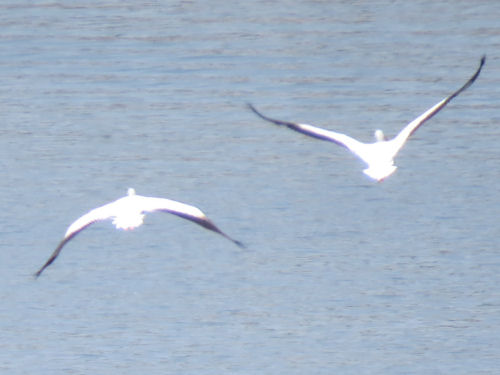 I can't keep saving all the wildlife pictures to show you later, or there will be a huge backlog. Already, I have no idea how to share all the new and interesting plants without boring you to death. Anyway, I'll add some wildlife from today. This is a red-spotted purple butterfly. He was kind enough to land on my foot for his picture. 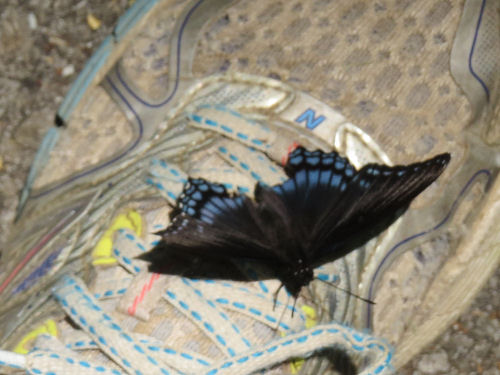 Best picture I've ever gotten of an indigo bunting. Not super great, but not terrible. 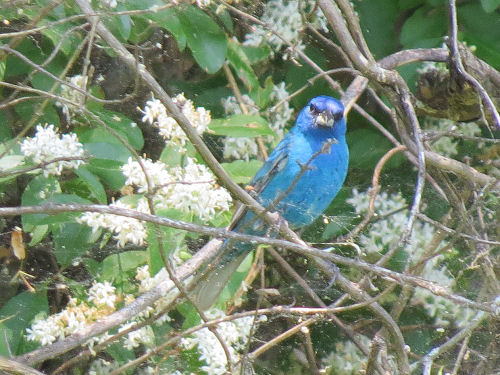 And most exciting for me, a new species to add to my list of animals. This is a five-lined skink. He was running right along that concrete bridge. I had no idea that a- they are so big, and b- skinks are lizards, not salamanders! 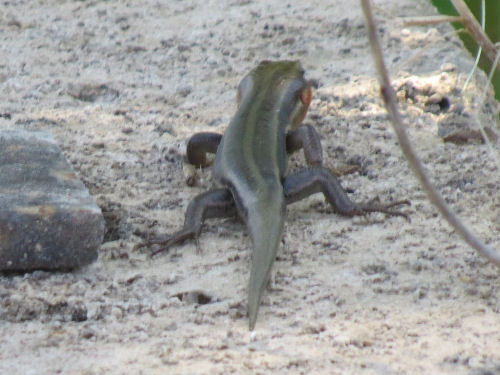 What an awesome day! I completed the hike loop via a paved trail, but there was a breeze so it wasn't too hot. That gave me time to hike the Native Plant Trail too. Total distance- maybe seven miles (the maps didn't indicated mileages).

Here's the trail joke of the day. I needed to use the Energy Trail to connect to the bike trail. I was quite perplexed as to what that name signified. The answer... trail under a powerline!

The poison ivy was crawling out of the trail throughout- coming for me. My first act after returning home was to shower and wash all the clothes. Hope I got everything I touched wiped down.

Awesome pictures. Ive enjoyed all your pictures this week. The indigo Bunting is beautifil. Florence has beautifil birds. Thanks for sharing.

That looks like a very pleasant hike. The expression on the Indigo Bunting seems to say "What are you looking at?"

hello sharkbytes its dennis the vizsla dog oh hay wow that is kwite a hike and lots of wildlife!!! i am not shoor wot i wood do if i saw a skink it luks kind of like a dinosawr!!! hay wunse they finally ketch wilson the volley ball in the dam ar they going to tayk it down??? and wot mayks them think wilson mite hav floted that way??? ok bye