I bought only one thing for me at the Vendor Event. It was this squash. This one is small and somewhat boring compared to the ones I saw leaving the premises with other people. Some were really large- over 2 feet long- with curly tails.

I went and asked the man with the produce stand (who was very local to the show, and who had a lot of yummy fruits and vegetables, and jellies too) what it was. He said it's called North Carolina Candy Roaster. Unless they are grown in Georgia. Then they are, you guessed it, Georgia Candy Roaster. 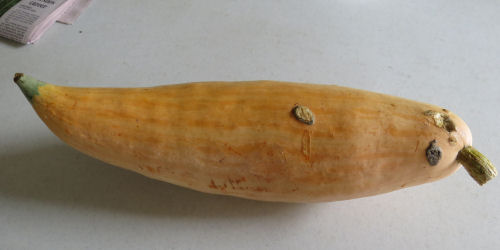 I asked him if they were sweet, based on the name. His answer wasn't definitive. But I bought the littlest one. Here's what it looks like when you cut it. 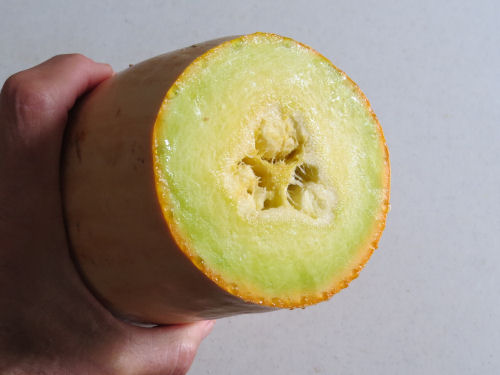 Shockingly, this is what it looks like cooked! Now this is intriguing. Maybe a great Halloween color. But it didn't taste like much of anything. It had the squash texture, but I didn't think it had hardly any flavor at all. This is my complaint about the "new" varieties of acorn squash. They are so mild they don't taste like anything. So, it's a novelty, but I don't feel like I need to buy another if I see one. 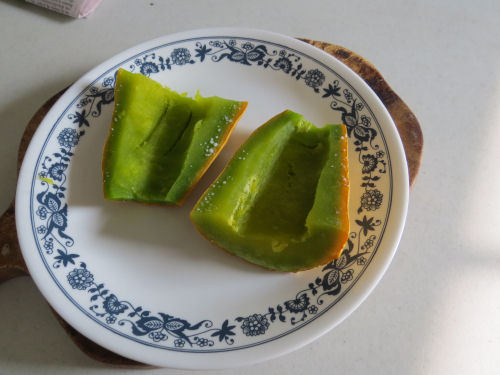 The best oddball squash I've had was a Blue Hubbard that someone gave me. I wish I could show you, but this was before I began blogging. He was growing different varieties to try them out.

This past weekend, Sylvia was busy preserving a lot of the bounty from their garden. It's a ton of work. She is an amazing Energizer Bunny. I haven't done much canning or freezing of late. But I've done my share over a lifetime.

In other news, I got off to a slow start this morning. I was tired from the weekend. But then I wrote a chapter, walked to the post office, and came home and assessed beginning one of the big fall projects. I think I may actually be able to beat myself into starting tomorrow. Stay tuned. The weather is in my favor. BR>
Posted by Sharkbytes at 7:54 PM

I've never heard of this kind. I do like squash but I would prefer it have some flavor.

Why are people afraid of flavor? I've seen blue hubbard squash. Not sure if I ate some though.

Ann- I SO agree

Chuck- the blue hubbard tasted somewhat like a sweet potato. I would buy another in a heartbeat.