I got a LOT done today, but I'm whipped. A lot of what I did isn't worth looking at yet, but I do feel as if perhaps I'm getting somewhere. A couple of days ago, I replaced a missing half block on one of the other corners of the well pit. But the southeast corner block was broken at an angle. I decided to just rebuild it. Just jammed some plywood scraps into the ground and braced them in place. 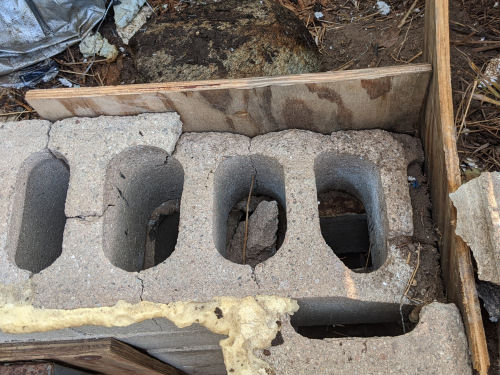 By late afternoon, I was able to remove the makeshift form, and voila- a "new" corner block. That is all of the block work that had to happen before I can start putting the topper on. 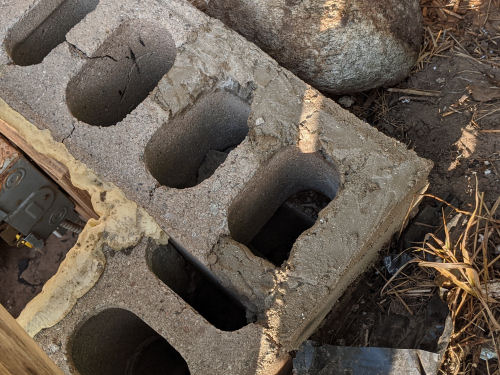 I also did some more cement work on the inside, but that looks the same as all the bits I've showed you already. I did get the short wall put together. I'm not sure why I thought the other wall needed studs on 16" centers. 24" would have been fine. I switched to that for the remaining walls.

Tomorrow, I should be able to move the frame back into place, put up these two walls and get the angle for the sloping wall studs. I also have a friend with a truck who is going to help me get the sheets of stuff I need to finish this.

I do have to do a little bit more of "making it up as I go" when I get to the entrance hatch. But I do feel a little better about this. I'd rather finish the cement work in natural light, but it's not a big deal. If I can get it covered, there is elecricity in the pit, so I can plug in a droplight.

In other news: Yes, there is other news- very productive day. I did laundry, and I got one of the pieces of extra material that goes in The Lonely Donkey done. That involved getting into a box that was buried. Then I discovered the mice had been in it. They did some damage, but nothing super critical. The big question in my mind is "where did all the cotton stuffing they dragged in there come from?" I think I'm going to have to buy a plastic tub for those items. Mice!

Posted by Sharkbytes at 7:23 PM

Wow you were busy. How did you find the time to do all of that? That block you rebuilt looks great. You did a good job on that.