That deer I thought might be wet is really just darker colored. This is a different day, and its other side. Blotchy looking. It hangs around with three other normally colored ones. 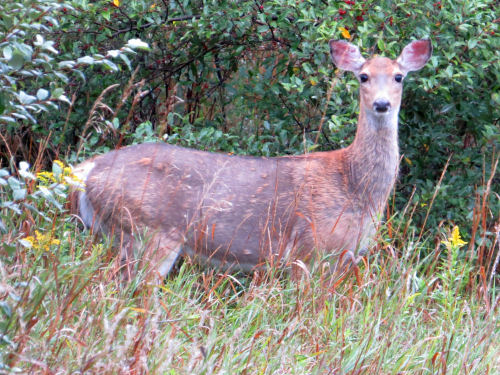 Other than this, I have nothing photogenic. It wasn't actually raining most of the day, but it was quite wet, and since there was no panic item, I just ignored the well pit project.

I worked on the extra materials for The Lonely Donkey, including the lettering for the cover. It's all ready, so that as soon as I pick up the art work from Linda tomorrow, and scan it, I can just layer it in place. I did a couple other computer things that I was supposed to do. It would have been really good if I had done three of those, but I did do two. That's better than none.

The other major item was that I got started on the final illustration for The Lonely Donkey. Still a lot of work to do, but I have it blocked out. It's pretty complex, but when I read through the text again for one more edit, I was also mentally scanning for what the fourth picture should be. It really has to be this. So be it. I'm somewhat amazed at how well the first three have turned out, so hopefully this one will too.

Too much sitting. Tomorrow I need to move around more.

Nice shot of the deer