Ramona and Running Around

The two best parts of the day were, #1, having coffee and a visit with my friend, Ramona, and #2, when it was all over. One of my errands took me to Manistee where she lives, so we spent a bit of time together. 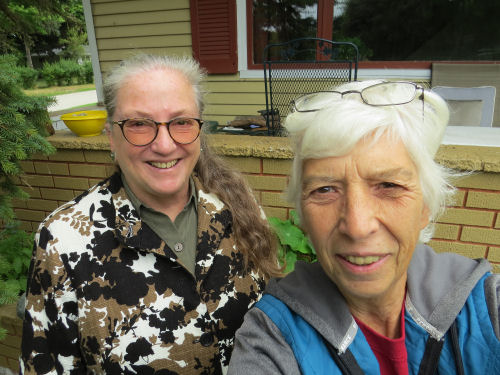 Other than that, I went to 11 different places in an attempt to be efficient at the errands that never end.

Other pieces of good news are that "my" peanut butter and my favoite ice cream are available again after being missing from the shelves for over 2 months. Also, I was able to get the package of salad greens I like, the availability of which has been spotty.

The bad news is that it still contains four little heads of lettuce, but the package is considerably smaller. Who do they think they are kidding?

The shopping news of the day concerns bottle return options. I've been keeping a bag of returnables that had to go to Wal-Mart because they were store brands. As you know, this is not my favorite place. But, as I said yesterday, I've been doing some cleaning. And there was an item I had to buy at Wal-Mart, so I added returning those cans/bottles to my list for the day. I walked in the store with my bag of cans and the greeter said, "You can't bring those in here." I was a little shocked since the return machines were directly to my left and I was watching people use them. What she meant was that I needed to go back outside and join the end of the waiting line for the returns. OK, fast forward to over AN HOUR later, I had my little chits of paper worth $1.60, and got to go stand in line at the service desk to cash them in. Wal-Mart had 10 return machines and were allowing only 2 people in at a time to use 5 machines (2 for cans, 2 for plastic, 1 for glass) .

I took most of my bottles and cans to Meijer, where I do almost all of my shopping. Meijer had 8 machines, and all of them were in use. OK, by the time I finished, 3 of them were full and needed to be emptied with no employee appearing instantly to do so. But that left 7 in operation. I waited under 10 minutes to begin my turn.

I give Wal-Mart a grade of D. They don't get an F because they were in some mode of operation. And they don't get D- because they did have an employee dedicated to the bottle area to free up jams and empty machines when they got full.

I give Meijer a grade of A. They have new machines that sort plastic bottles from the cans for you (glass still goes in a different machine). The area was clean and did not smell bad. People did not have to stand outside the store to wait. They had mounted panels between the machines to keep people "distanced." I can't quite give them A+ because they didn't have a johnny-on-the-spot to empty the full machines.

And, it's good news that Wal-Mart actually had the item I wanted to get there.

But I'm really glad this set of running around is over... until I need something else, right?
Posted by Sharkbytes at 9:07 PM

Nice that you got to spend some time with a friend.
I absolutely hate Wal-Mart but there are not a lot of options close by so I go when I have to.