On the Way Home (With Qualifiers)


My program this morning went really well. The group, although not hikers, were really engaged and asked a ton of questions. And several of them bought books. Hooray! (North Country Cache)

I was on my way home shortly after noon. Here's a view of the Lakeview Hotel in the daylight. Supposedly we actually had a lake view from our room. Did I remember to look for it in the light? No. All I can tell you is that you can not see the lake in the dark. 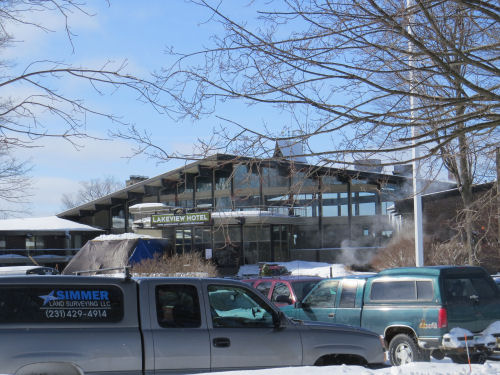 The weather was much better today. The roads were pretty clear and the sun shining, so I drove home by my less-main-route that I like better. One town on the way is Manton. Here there is a mural on a wall beside the railroad tracks. The tracks were originally the Grand Rapids and Indiana Railroad. Then it was bought by Penn Central. They sold this section and it became the Tuscola and Saginaw Bay RR. Currently it's part of the Great Lakes Central line, a passenger service with a number of short sections of line. As for the picture... there was no label and I couldn't find out anything about it on line.

The last sight to share is a Michigan fieldstone house. Michigan doesn't have limestone or sandstone which can be cut into blocks. Michigan doesn't have shale which breaks naturally into rough rectangles. Michigan's Lower Peninsula doesn't have any rock near the surface. The bedrock is safely hidden many feet under lots of sand, and when you get to it, it's basalt. However, the LP does have rocks, plural. These are rounded rocks, dragged, scraped, rolled and dropped by the last glaciation. They don't stack well. But if you have some sort of mortar and a lot of patience, you can build a house. Actually, this looks like it was originally a school. 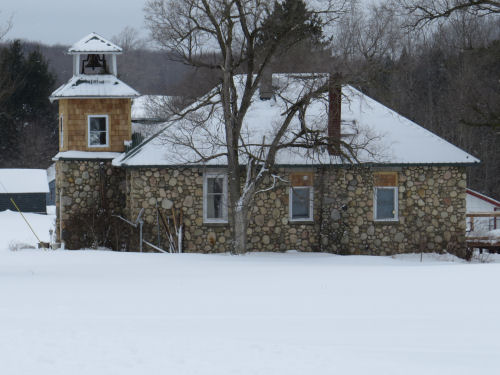 Tomorrow- work at the paper again.

That is a wonderful mural. Is that because it evokes memories of my youth?

Friend has a stone house; calls it "Pitcairn."

That is a wonderful mural. Is that because it evokes memories of my youth?

Friend has a stone house; calls it "Pitcairn."

I'm glad to read that your program went well.

Years ago, we had a friend and neighbor that was an old time stone mason. He did beautiful work.