The Schemings of Scapin


Went to a play tonight that was exceptionally good. It was an updated version of the classic Moliere comedy, Les Fourberies de Scapin. This translation was done by Timothy Mooney, who also played the role of Scapin. Interestingly enough, the whole thing was done in rhyme, but so well done that it added to the comedy rather than becoming sing-song. Many of the characters wore masks, heightening the stereotypes of the roles.

First performed in 1671, the play still works as a slapstick sit-com.

There are too many pictures, so just bear with me. I was brutal and eliminated almost half of what I had picked out. First off the staging. I can show you how that worked in one shot. The musicians are on the left of the picture (guitar and recorder- nice baroque melodies), with the Mayor behind them. The stage proper is in the center. On the right are the rest of the cast. They served as "studio audience" whenever they weren't actually acting, providing laughs, jeers, and poking fun at people. The cart, where one man seems to be dressing, is just that. Whenever it was time for someone to go on stage, he or she would get their mask (if needed) and props from the cart and get ready. 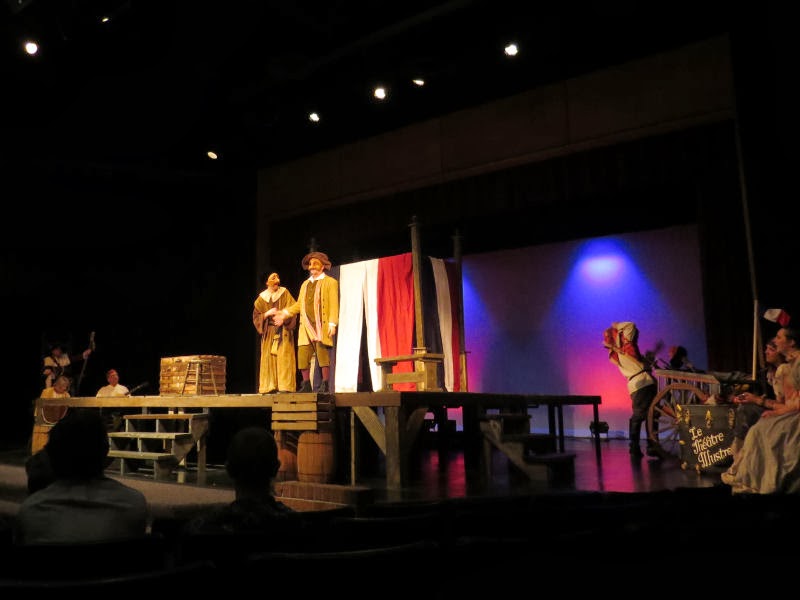 It is one of those complex tales of young lovers at odds with their fathers. The fathers are Geronte and Argante. They each have a son, and they each have a plan for who the son will marry. But of course the boys don't like those ideas. Instead, Argante's son Octave has fallen in love with, and married, Hyacinthe, Geronte's daughter. Geronte's son, Leander, has designs on a gypsy girl, but dad doesn't like that.

Here Argante (right) tells the rascal Scapin (left) the trials of being a father. Scapin commiserates. 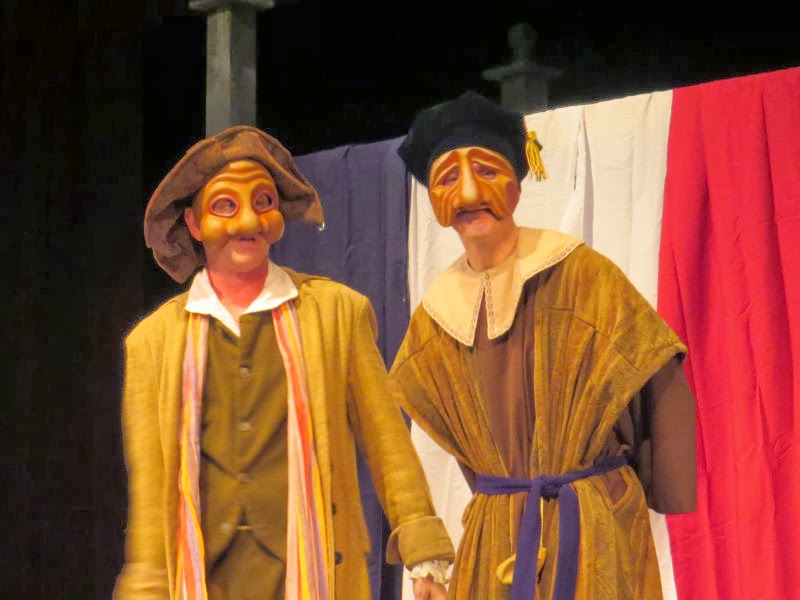 But both boys beg Scapin to help them get enough money from their fathers so that they can marry the girls they love rather than their fathers' choices. Of course Scapin agrees. 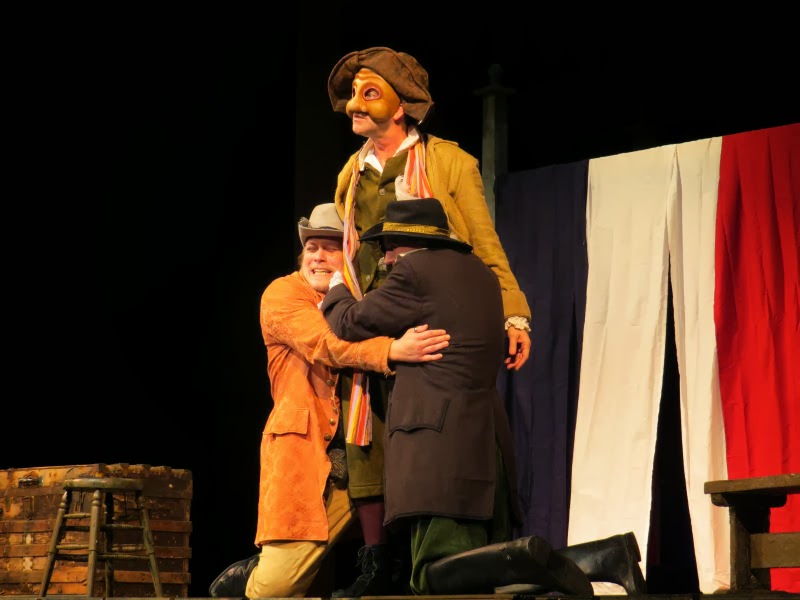 Scapin begins making up tales to get enough money to help the lovers. Here he is working at convincing Geronte to hand over a huge sum of money. 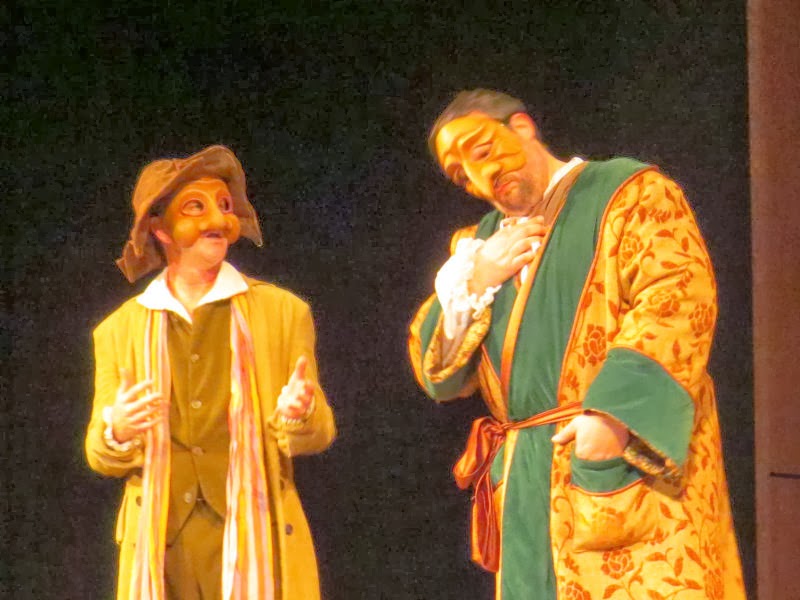 Leander is ready to shoot himself when Scapin teases him that he couldn't all get the money. (I wanted to include this picture because Leander is the same actor who played Charley in Flowers for Algernon) 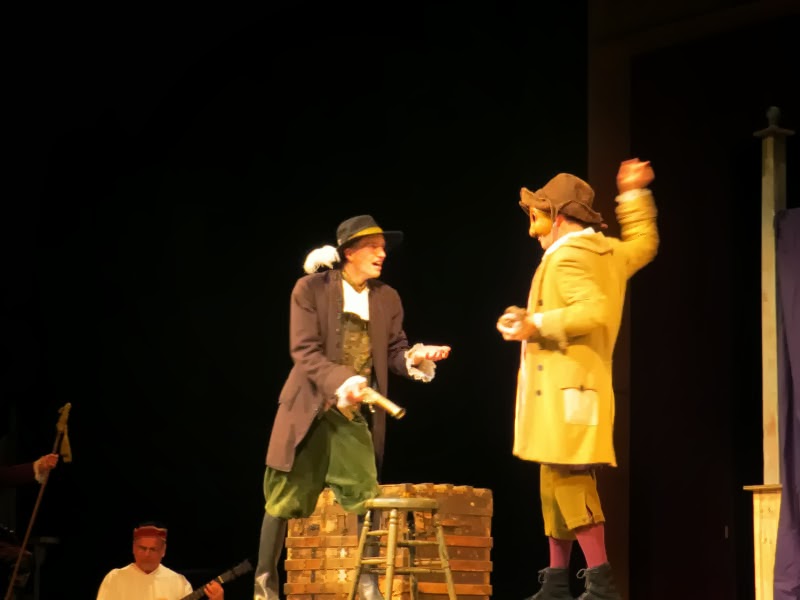 Because Geronte said some unkind things about Scapin, the wily Scapin tricks Geronte into hiding in a sack, where he then manages to thrash him while blaming it on some other mysterious men. 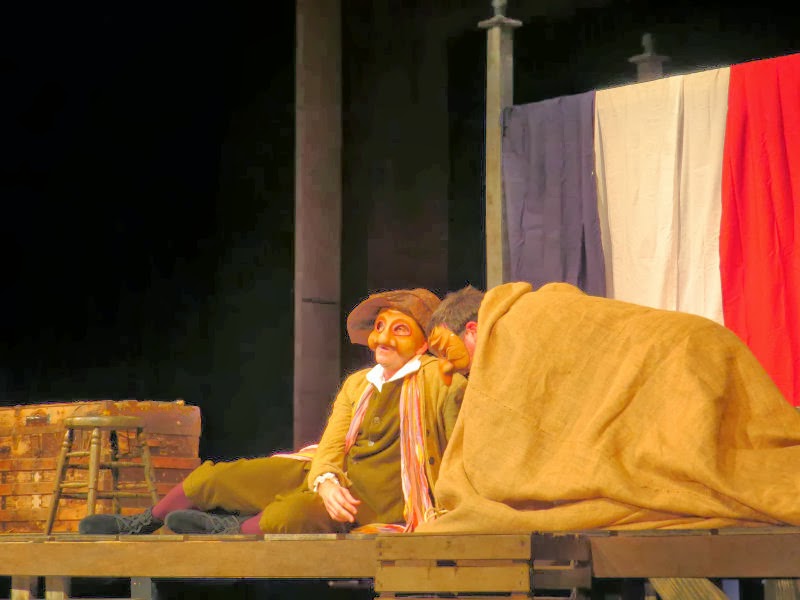 Unfortunately for Scapin, he is caught in this ruse. Then, Zerbinette, the gypsy girl comes along and tells Geronte a huge joke of a story about how a friend of hers fooled an old man and extracted a huge sum of money from him, not realizing she's telling Geronte his own tale. 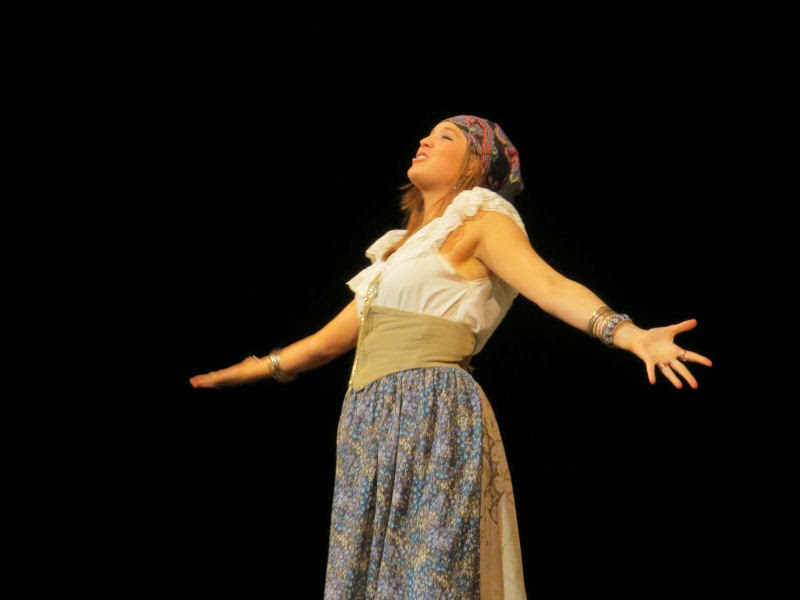 In a crazy plot twist, predating but like those used by Gilbert and Sullivan, the fathers realize in the end that their sons have chosen the perfect girls, despite the original plans, but they still blame Scapin for taking their money. 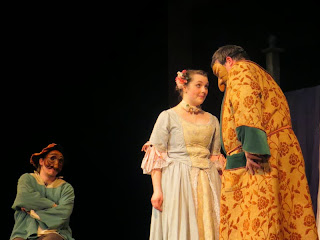 Poor Scapin must feign a mortal wound to receive their forgiveness, so that there can be a happy ending. 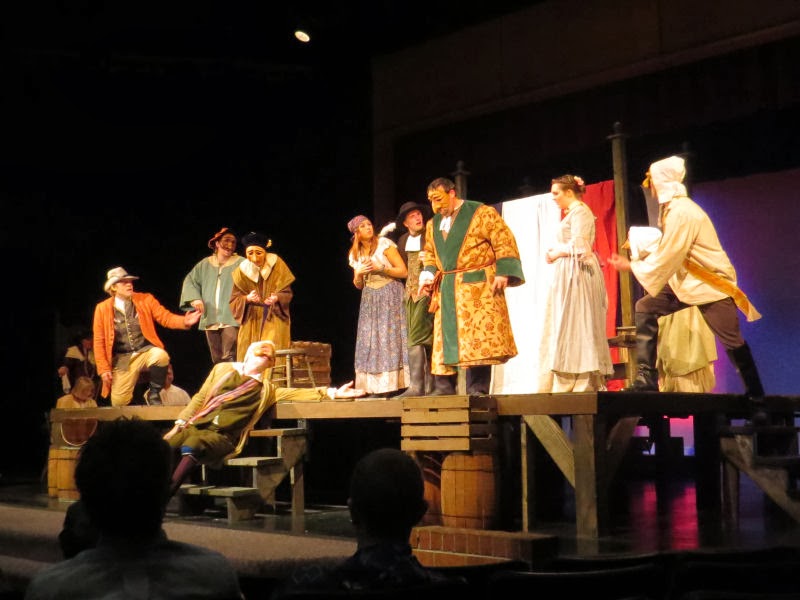 Like any comedy, it will either work, or it won't, depending on the dialogue, actors, timing and all the rest of it. With the costumes, masks, dated script (not the translation) and rhymes, I knew this was either going to be tedious or really good. It definitely made it to REALLY GOOD, without my having to strain to make it so.