Afghans I Have Made- Crochet- Brown Paisley


The second afghan project I took on was when I was in college. This one was made for my mom, and she did indeed keep it on the back of her couch for many years. I'm sure I didn't finish it as fast as was originally intended, but it did get done. In 1967 I'm pretty sure.

Mom and I went together to a woolen mill outlet to pick out the yarn. It's the only afghan I've ever made with real wool. I learned that it was harder to work with than the acrylic. We had to do some serious blocking when it was complete, but it turned out OK.

This is crocheted in afghan stitch and the paisleys are embroidered on afterward. I seemed to be in love with the idea of cross-stitching designs on a background I had made. Some other projects followed that same plan.

Afghan stitch is created by drawing up a series of loops on a long hook and then bringing the yarn back through them one at a time. This is a lot different from "regular" crochet where you usually have only one stitch on the hook at a time.

I was also going through a phase of being in love with brown. And paisley. Anyway, here it is. It just lives in a drawer. I certainly wouldn't have kept it out when we had a dog. I'm better off with things you don't have to be very careful with. 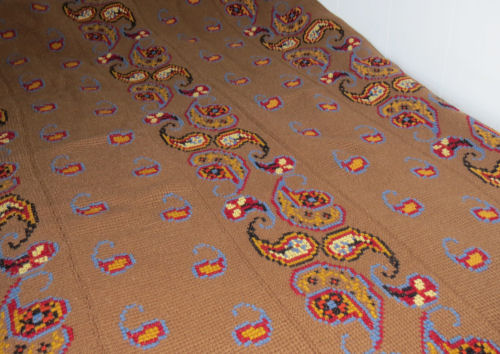 And a closeup of the design. 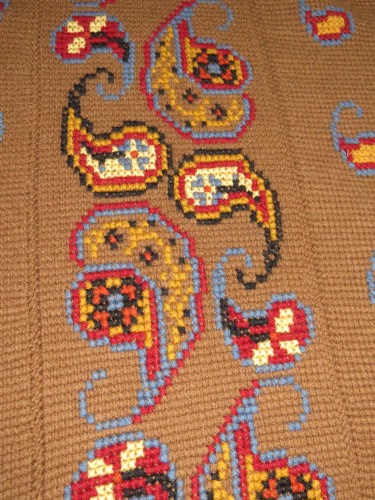 Wow! That looks like a ton of work...and very warm!

A beautiful design and it looks like a lot of work.

a very impressive blanket. I was thinking the same as Lin, that I bet it's very warm.

Lin- Yeah, it was a lot of work. I was pretty sick of it before I finished.

Ann- you know, I don't think I've ever slept under it. Maybe I should some night just to find out.