More pictures from Monday. This bird is so handsome it ought to be more likable. But the cowbird is not a bird I'm fond of because of it's attitude of entitlement. 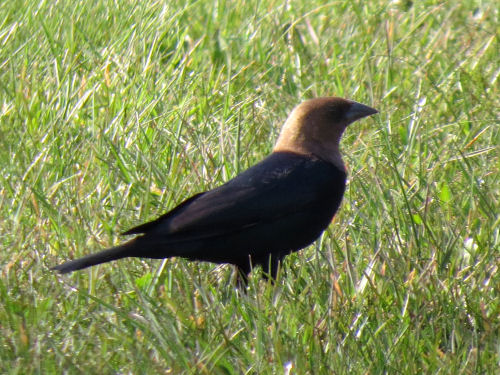 It can't be bothered raising its own babies, so it lays eggs in other birds' nests and then lets the other family care for the intruder. Occasionally, it will stick around to watch and if the large foster baby is expelled the cowbird will destroy the entire nest. 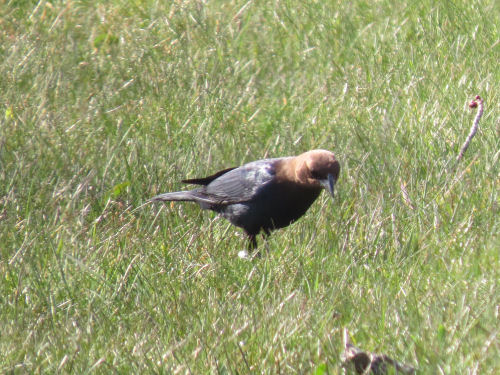 This behavior is call brood parasitism. One study showed over half the nests where the cowbird egg or chick was rejected were damaged by the cowbird parents. The resulting "Mafia hypothesis" (I kid you not) speculates that the host species has learned from this behavior to feel threatened into raising the cowbirds lest they lose their own chicks.

To be specific, this is the brown-headed cowbird, and this one is a male. Females are more drab.

It's always interesting to read about the cowbird. This has been one of the most interesting birds for me ever since the first time I found out about them.

I see them once in a while around here. I'd forgotten about "brood parasitism."

Pretty with its black bod and coppery head, but possessed of some nasty habits.

Ratty- well, they are interesting

Chuck- Pretty common in these parts

Vanilla- yes, I love the coppery color, but so naughty!

hello sharkbytes its dennis the vizsla dog hay wow that is sum pritty rood behayvyor!!! its like the cowbird has ben watching how the bad hyoomans operayt or sumthing!!! ok bye