Trouble is a Girl

I'm talking about one particular critter named Trouble. The one who lives on my deck.

Yup, last week two more little versions appeared, running around like maniacs. At least one of them is a boy, judging from his inappropriate playtime activities.

I caught one of the little ones up in the place between the two roofs where they have a nest. I've named them Double (Trouble) and Triple (Trouble). Just call them the DTs. Riley's grandchildren. I haven't seen her since spring, when she was looking very old. I suspect she has gone to squirrel heaven. 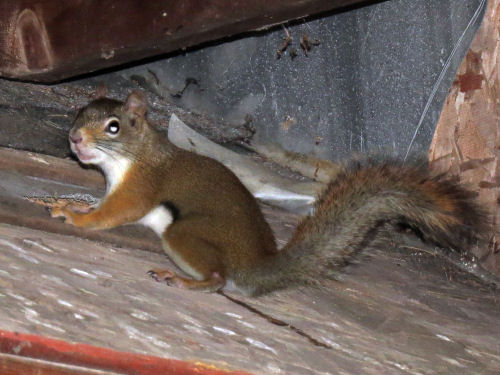 They still aren't actually IN the house. As long as they just nest in that protected outside space I guess they can stay.

It's sort of like Charlotte's Web, but with squirrels. :) They are very cute. Gotta watch them, though...to make sure they don't do damage up there.