I got asked to work again today. That's good- I like the extra hours.

The task was to run 12,000 booklets through this machine to staple and trim them. I've only done this a couple of times before because it's usually done at the beginning of the week. Previously, I was doing my other job on those days. 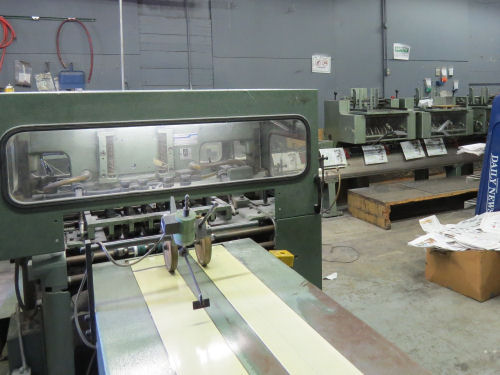 We got about 600 of them done and the machine quit working. It really quit... as in Terrie had to come work on it. That's how we spent the next four hours. She's amazing. She took the staple mechanism all apart. Interestingly enough, it's very much like a sewing machine inside.

I mostly watched and played gofer. I went to the hardware store to get a screw that stripped while we were trying to get it out. He asked me if I was trying to fix my kitchen blender. I said, "No, it's from the inside of the book stapler at the newspaper." They had the right diameter and head, but only too long. The guy said he would cut them off or we could have the guys at the shop do it for us. I said, "It's the girls at the shop, and we don't have the tools to do that."

Later, we got that part all put back together, and the first time we tried to run it the two staplers (each book gets two staples) were not quite in sync, and one of them jammed. So while we were trying to take that apart to realign things, the slot (hole for an Allen wrench actually) in one of the bolts holding the backing plate in place was stripped. So I went to my car and got my needle-nose vice grips and was working on getting that out. Another guy came along and asked me if I wanted him to do that. No.

Do guys have any clue how TOTALLY infuriating that is? If you are a guy reading this, please do not try to take a job out of my hands while I am doing it. If you do, I take no responsibility for my reaction.

Anyway. Terrie is a genius at making these old fussy machines play nice. We got it all working except that the bolt we had to use the vice grips on now has to be replaced because we couldn't get it back in far enough. Also, its twin bent when we removed it. She's was going to get two of those and hopefully can get the whole machine working tomorrow.

In addition to playing gofer and watching, I did learn how to thread the machine. It uses wire from a spool and makes its own staples as it goes.

We don't have to put the books in the papers until Friday, but there are still 11,400 of them to go.

Interesting stuff. I bet given enough time you could fix that machine yourself.

You go, GIRL! I hate it when men come along and offer to "save" us. Ugh.

I am always impressed with your skillset.