I ended up with only about an hour and a half that I could work on the trailer. I tackled some demolition of the right side. Here's how it looked when I started. 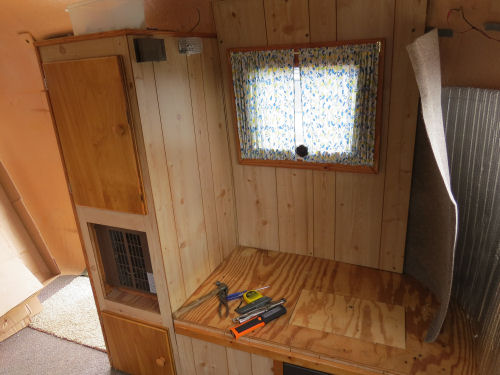 First I removed that window frame, and the paneling on that side. Then I took all the "extras" off the cupboard: thermostat, 12 V light, and 120 V outlet.

The cupboard is the one thing that was built in really well and may possibly have been part of the original interior. At any rate, even though I'm not re-using it, I'd like to not totally destroy it.

The middle shelf is where the furnace lived. As it turned out, all I really accomplished of a serious nature was that I got the furnace out without damaging either it or the cupboard frame. It took a while to figure out how it had been put in, but I managed.

Then I started trying to separate the cupboard from the furring strips that are fiberglassed to the trailer. I have taken out five big screws that were holding it, but it still won't budge. That will have to be the next day's puzzle/project. 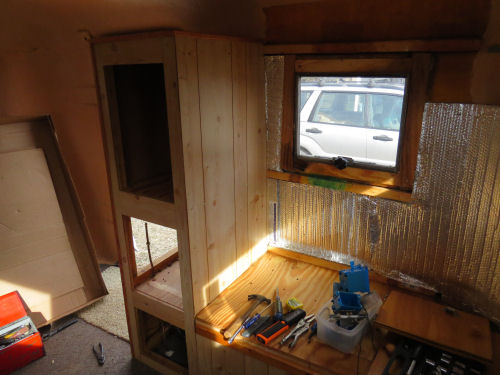 In other news, I dried clothes outside on the line. In February! Unheard of.

Posted by Sharkbytes at 8:30 PM

I actually thought about hanging sheets out on the weekend. Time was the only foil...I didn't want to stick around long enough to have to fold them.

You are making great progress.

You made good progress for just a short amount of time