You've seen the jokes about how Michiganders put on shorts when the temperature hits 40 degrees? It's true. When I got home, I put on shorts myself. 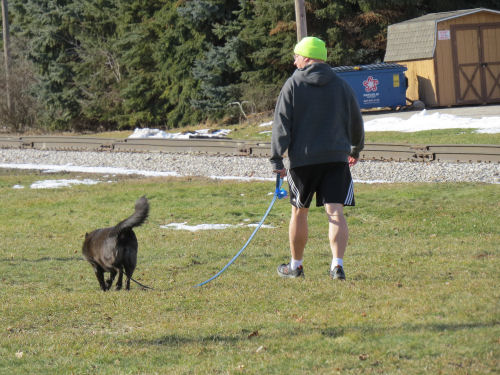 It sure felt like spring (although I'm sure it won't last). The only surviving snowman is in lights on the bank sign, even though the calendar says February. 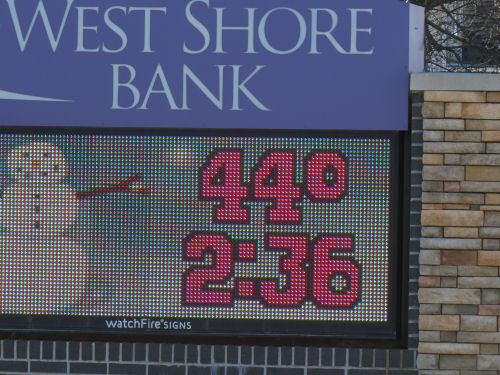 I walked to town to do errands and pick the brain of my favorite bank officer. I'm writing a scene in Dead Mule Swamp Druggist about opening a safe deposit box, and I want it to be accurate. Chapter 36 done!

Speaking of Dead Mule Swamp.... it's October there. Here's a sample from Chapter 36:

He scooped up the papers with Helen's identification and left the office. I turned in my chair and saw him knock on a closed door across the lobby. It opened and he entered, closing the door behind himself.
"Is this good or bad?" Helen whispered.
"I'm not sure," Cora said. "He should have had the authority to let you open the box. But he's very young. Maybe he's not actually a bank officer."
Helen shook a cigarette out of a pack and nervously fingered it.
"You can't smoke in here," Lisa hissed in a strained voice.
"Oh. Right," Helen said, continuing to hold the pack in one hand and to roll the cigarette between the fingers of the other.
Lisa began to tap a fingernail against the metal clasp on her purse. I looked at Cora and she shrugged. Minutes ticked past. Coffee was burning somewhere and the automatic door to the lobby opened and closed with an annoying swish-swish-thump, followed by a cold draft of air, whenever someone entered the bank.
Finally, we heard the men approaching. Tim Statler re-entered his office first, followed by an older and rounder man who looked less businesslike than Tim. His well-worn suit was rumpled and his tie crooked. Tim introduced him as Ernest Hathaway, a vice president of the bank.
Mr. Hathaway cleared his throat. His eyes darted from Lisa to Helen. He saw the cigarettes and frowned. Helen reddened and shoved everything back in her bag.
"Well, this situation is really quite straightforward, although a little unusual," he said in a soft voice, clearing his throat again.

Patiently awaiting the availability of that fifth book in the Dead Mule Swamp series.