Today was one of the oddest winter days in my memory. It's even been on the national news. We've gone from about 3 feet of snow on the ground to only a few inches. 55-degree temps and steady rain made for heavy fog, perpetual slop, and the awakening of quite a few insects in the kitchen! The Asian Ladybugs (of course, but they are pretty boring), the fruit flies, the larger black flies (but not the biting northwoods kind), and the leaf-footed bugs that show up occasionally. 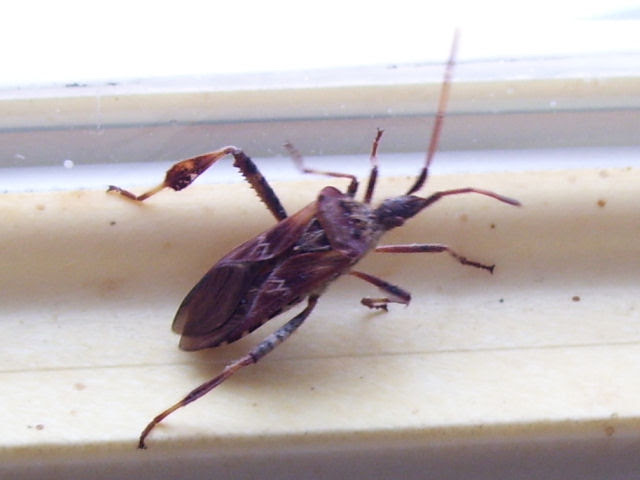 So I think the leaf-footed bugs are interesting. And they don't bite. I usually just throw them outside. But today I decided to find out more about them and tell you!

Actually these are only related to the Eastern Leaffooted bug. (so called because of that leaf-like widening of the hind legs). Mine, L. occidentalis, came from the west, to the southeast, and has now spread to the Great Lakes region. It likes to overwinter in buildings, which is why many people see them (like me). This one's common name is actually Western conifer-seed bug. 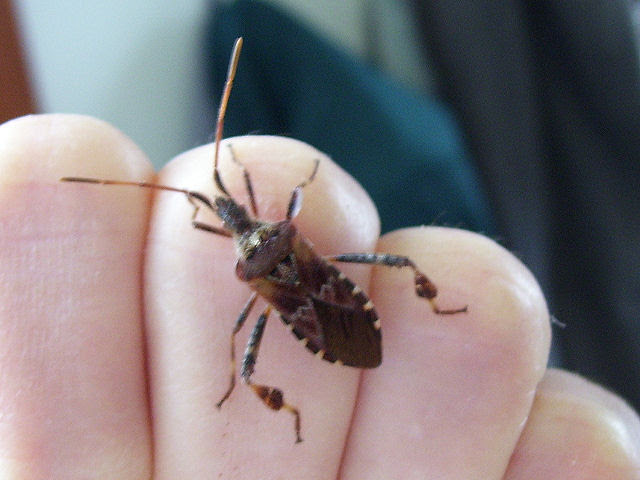 They have piercing-sucking mouthparts and feed on sap from green cones, twigs, seed pulp, and sometimes needles of several species of pine, plus hemlock, spruce, and Douglas-fir. They do not bite people or carry diseases. Supposedly they can give off an unpleasant odor when handled, but I've been picking them up for years and haven't experienced this. They don't reproduce inside (well, unless you have a live conifer tree, I suppose). They sort of buzz when they fly.

Very interesting. I've never seen one of those bugs before. I'll have to pay more attention to bugs from now on. With today's weather, I've been learning all sorts of new things.

I realize I'm months late discovering this but am so excited! I have these little guys sharing my place here in winter, in fact, on last Earthday I blogged about my '09 resident (he was missing one leg.) A NEW ONE seems to have moved in a couple of days ago, for the coming winter? I never quite knew what they were, but knew they were harmless...and really cute! Thanks so much for this lucky bit of info!

Hi WillOaks- I'm really happy that you found an older post that answers a question for you. I'll have to check out your Earth Day post.