From her perspective I suppose she felt like she was just being yelled at all day. First of all, she still keeps trying to nip snacks from the dead deer in the back field while we go on our walks. I wouldn't mind so much if she didn't throw up all over the bed later in the day after these snacks. So she KNOWS she'll be called a "bad girl" and get no biscuit when she goes to visit the deer, but after about four false starts for the carcass, and coming back when called, she usually loses to temptation and slinks away from me. It's hard to chase her on skis. I'm pretty awkward!

Then there's still Dandelion. My little 'possum has taken up residence under the bench on the terrace. It's a wonderful hidey hole in a corner, protected by a tarp and a shovel. Good thing too, because Maggie keeps trying to poke her nose in where it's not welcome. And I keep yelling at her to get away from there! 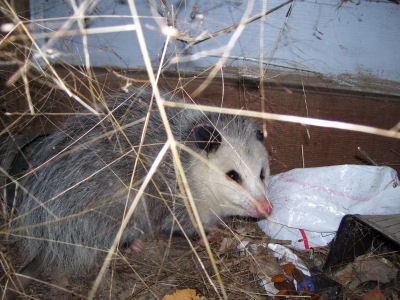 Finally, uncharacteristically, the cat was sleeping in Maggie's spot on the couch. Now, really, that was just too insulting! But poor V-8 is eighteen years old so I try to keep Maggie from chasing her. So until I could scoop up the kitty, Maggie got yelled at again! What's a curious dog to do when she gets told she's bad every time she wants to explore anything of interest?

Dogs are great, aren't they? Animal tracks are everywhere. It seems that everyone is posting photos of animal tracks right now. They are fascinating. Your photo is one of the best I've seen. And I'm not sure if I need to look for a possum anymore. You have better photos of your new friend, than I could probably ever get of another one.

Oh, but if you got a possum photo, it would be yours! Don't stop looking.