Today I had a list of work assignments. I saw a number of back roads, REALLY back roads, that I'd never seen before. Took one wrong unmarked two-track, but didn't know it was the wrong one till I got back to a real road and was not where I wanted to be. Saw two lakes that I never previously knew existed-- one is totally private, so I'll probably never see it again. Both were hardly more than ponds... no great pictures there.

It was such a mixed bag, I'll just share my two favorite captures of the day. The very best would have been two sandhill cranes in my own field. But I didn't have the camera with me because it was raining, so I had left it in the house while walking Maggie. Hopefully the cranes will visit again. I also saw another red-headed woodpecker, a red-tailed hawk swooping low, and a turkey with a brood of chicks, but couldn't get pictures of those, either.

So, you will have to settle for things that move more slowly. First is the one Marquette Rail engine that they have painted in their yellow and maroon scheme. This is the same line that runs in back of my house, but this picture was taken about 10 miles away. 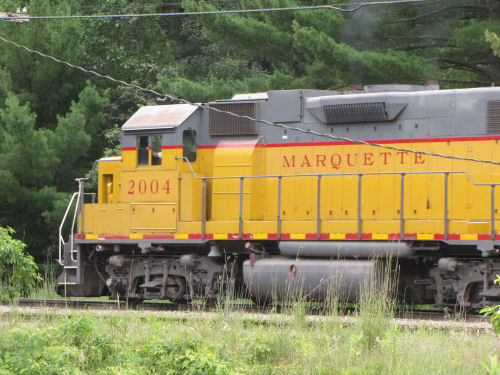 The second picture is an unexpected view. We have some little hills, but not very many places where you can actually get a view. I've showed you a few, and today I found another. It was a complete surprise to me. I'd never been on this road before. It has the unimaginative name of State Road, and it's just a wide sand road that goes along a power line. But not in a straight line, and it is quite hilly. I was really surprised to come to the top of one, and to be able to see this view to the west. 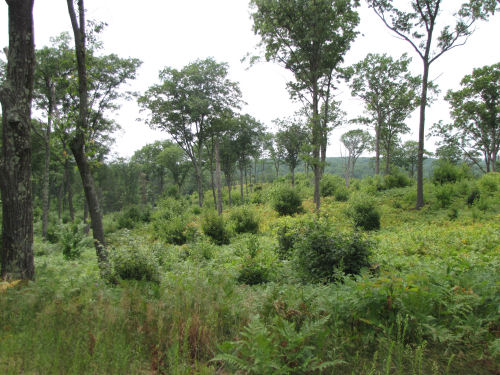 That's the scoop for today. They can't all produce spectacular images.

Thank you for sharing.A pleasure to be here always and enjoy your pix.

I like to explore those back roads. It is especially nice when you make those unexpected discoveries.

You have entered into the world of unexpected discoveries.

unexpected views sometimes are the most awesome views we have, beautiful.

Your train engine is a beauty compared to the ones I see here.
Hey...It is great to read about your very,very cool bird sightings!!!

Chuck- I sure went two-trackin' today

rainfield- I'm steeped in the unexpected

betchai- I guess that view isn't really such a big deal, but it was such a surprise that I love it.

Jean- I keep trying to get their pix- sometimes it works.

It's nice that you get out and about, all over your area so much -and you still, occasionally, find new things that you haven't seen!

hope those sandhill cranes return for a portrait sitting for you.
Around here it's the Bessemer & Lake Erie Railroad.

Carmen- there are SO many things I haven't seen. I just try to get pictures of some of them.

Ann- me too. It's the first time I know for sure that any have landed right here, and I missed it.