Other Wildlife from the Hike


I have to say that we did see quite a bit of wildlife on this hike. Only one sighting was "unusual," but all were enjoyable.

I've already showed you the snail, the bullfrog, and one of the many, many great blue herons. Actually we saw one or more of those almost every day.

The very first day out we joked that we saw one of just about everything common: rabbit, woodchuck, chipmunk, squirrel, heron, geese, garter snake...

So, I'll get right to the point and show you the special thing first. This is special not because it's uncommon, but wood ducks are pretty secretive, so I think it was awesome to see mama wood duck with a row of babies. They were paddling fast for the cover of some reeds. You won't see her leading the babies out on a grassy lawn like mallards do. 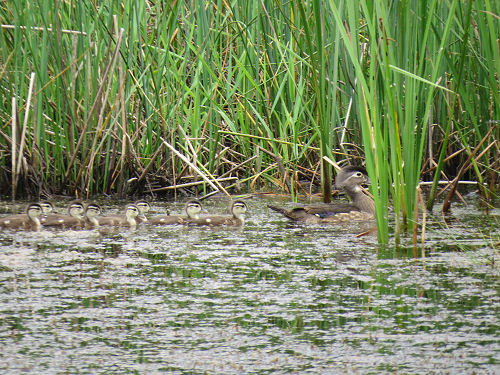 We saw surprisingly few turtles given that we were beside water almost all the time. I suppose the rivers are a bit too swift, but I think the canal would be ideal. The ones we did see were often covered in duckweed. This isn't really a problem for the turtle, but it's not too photogenic. 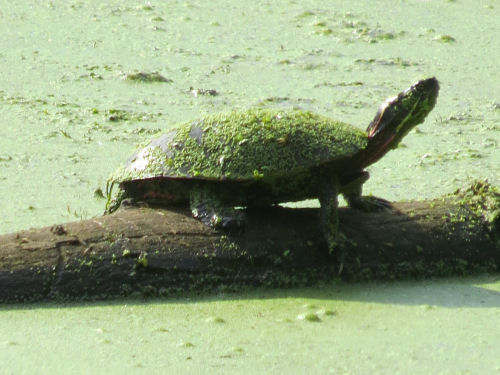 There didn't seem to be as many deer as we have here, but since Michigan is sort of paved with deer, that isn't saying much. This one wasn't very concerned about us. 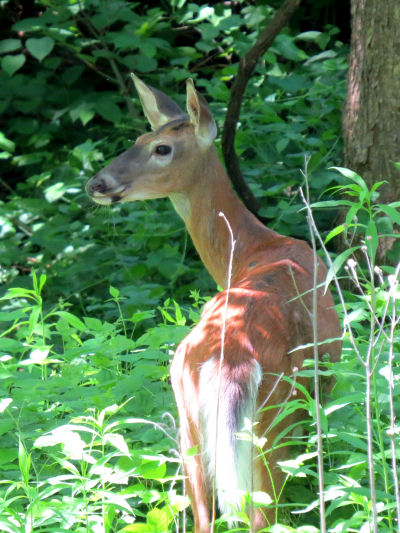 Here's a nice butterfly that posed for me. Pretty sure this is a Silvery Checkerspot. 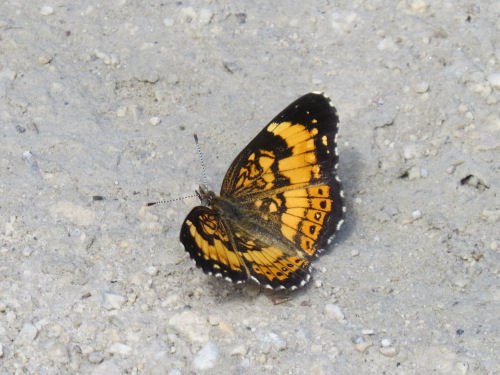 This sighting gave me a good laugh. Someone's koi must have washed into the canal from a backyard pond during a rainstorm. It's now a seriously sized fish. Terrible picture, but it does prove what I saw.

And since goldfish and koi are nothing more than pretty carp, it's a great segue into another story. The last day of the hike I encountered two young men walking beside a pond watching the water and carrying bows and arrows. I asked them if they were planning to shoot fish. "No," said one, "just carp."

OK... I said "Well, carp are fish, although they aren't worth anything." They agreed. Then I asked if they were doing something unusual, or if there are lots of people who hunt fish with bows and arrows. "There are lots of us," they said.

Since then, I've seen articles on the internet about this odd sport. Interesting. 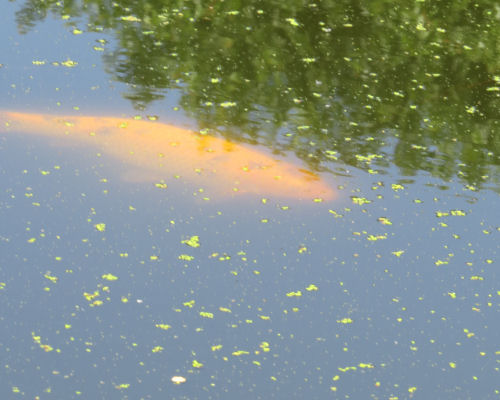 I saved what I consider to be the funniest picture for last. The campsite had a resident woodchuck. I told the manager that the city was going to have to put her on the payroll because she went around in the mornings and cleaned up bits of things left around the fire rings.

But this pose just makes me laugh. She looks like a 1930's pin-up poster. Well, ok, maybe she has more fur and too much overbite. 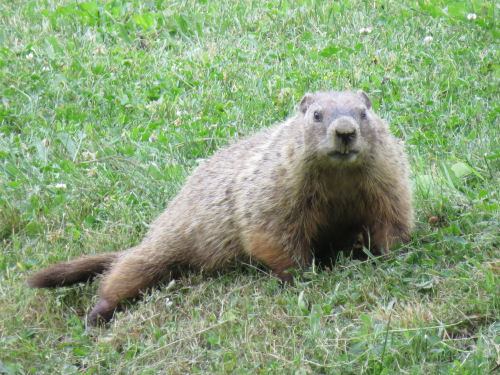 Lots of fun wildlife this time. I always like to see animals.

Paved with deer? Seems just about right to me. Especially in the rut. Crazy goons.

lots of wildlife sightings. Hunting carp with bow and arrow sounds a bit odd to me but what do I know.
Love the picture of the woodchuck. She did have quite the post there

Great picture of those Wood Ducks!