Today has to be in honor of Maggie Millicent Sweet Potato Pie. She took a fast turn for the worse last night, and by this morning we knew it was time to say goodbye. No regrets (not that this makes it easier). I promised myself I wouldn't wait too long this time and cause another dog a lot of suffering just so I could have one more day.

I am going to show you pictures you've never seen before (I'm pretty sure), in honor of the sweet and funny dog she was. She's been the only dog of mine you've known if you are a follower of this blog. But, you probably don't know how she came to be mine.

She began life under questionable circumstances, and she and her littermates were left at the Ann Arbor Humane Society. She was the only one who lived, and it cost a lot of money to keep her alive. She had double pneumonia. I had just lost Chips, and wasn't really looking for another dog. Indeed, Maggie did not become mine for a long time. However, she did come to the extended family of some friends I was staying with while finishing a grad school project. Therefore, I was a part of her life from the time she was about eight weeks old. With a lot of medication and care, she recovered. She was also born with really bad hips. And she couldn't ride in a car without being given doggy Dramamine. I have no pictures of her when she was really little.

The friends, who eventually got full-time care of Maggie, found this picture of her. I think she might be about eight months old in this one. Please notice the purple collar. 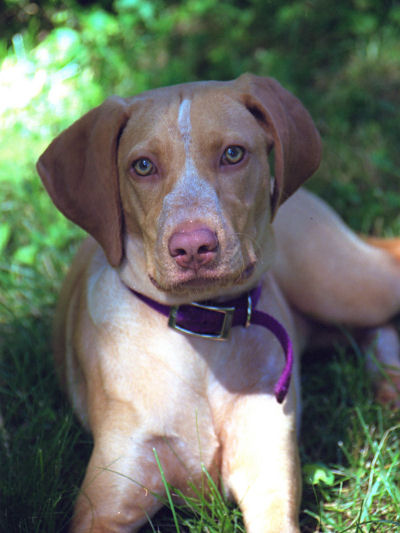 That collar was bought for her by her first owner, who loves purple. Me... it's the second-lowest color on my list (pink is worse). However, the daughter of her first owner pretty much grew up with Maggie and sort of always thought of Maggie as her dog, just on permanent loan to me. So I kept the collar. She has worn it ever since, and it will now go in the drawer with all her predecessor's collars. I'll always know which one is hers!

Maggie wasn't getting enough exercise in the city, and friends Phil and Nan really wanted me to take her home, but I didn't think she was the dog for me. Her bad hips would keep her from backpacking. Chips had gone everywhere in the car with me; I couldn't see having a dog that threw up in under two miles. And her yellow eyes gave me the willies.

But when she was almost one and a half, it came down to: Maggie would either come with me or go back to the pound. I decided to give her a try. I had her hips x-rayed. They were terrible. One side was so bad the ball was just barely engaging the socket. I hoped that more exercise would improve the muscle tone. She loved chasing this toy, which came to be known as the "red ring." And we took two walks a day. She quickly gained strength in her back legs, although the vet warned me to never put a pack on her. She got so she could ride about 30 miles without barfing. Not great, but better. 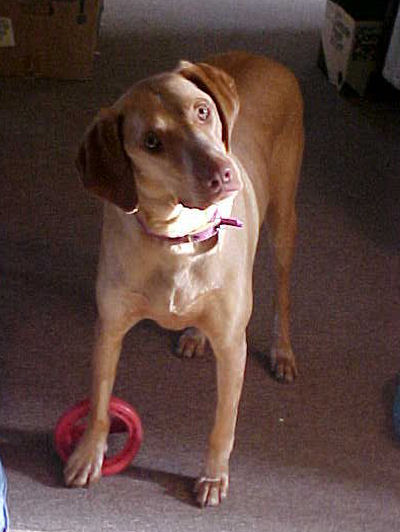 No one knew what kind of dog she was. The pound knew that her mom was a yellow lab, but they thought the dad must be a red bone hound. Not a bad guess, but every so often someone would look at her and say something like, "She's one of those dogs from Europe, I don't remember what they are called." One day, someone said, "I know what that dog is. She's Hungarian, a Vizsla."

So I began an internet search and discovered that Vizslas are a Royal Breed. She fit the characteristics perfectly, except that she doesn't like water. I especially liked their nickname of "Velcro Vizsla," because they like to always be touching their human. Nan called her "the red worm," because she always wanted to worm her way into a lap. Speaking of: 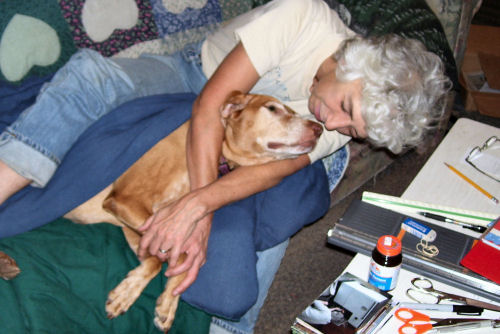 That picture was taken in 2006, and you can see that her face was already almost all white. Also, oddly, her eyes darkened over the years and lost their pure gold tone. When she was overweight she looked like her lab mama. But too much weight was bad for her hips, so we worked hard to keep her slim. When she was slim she looked like a perfect Vizsla.

She had the softest ears of any of my dogs. They were like warm silk. She loved to have them petted, and it was a pleasant thing to do. Those ears would flap when she ran, and I got a few pictures of how cute that looked. 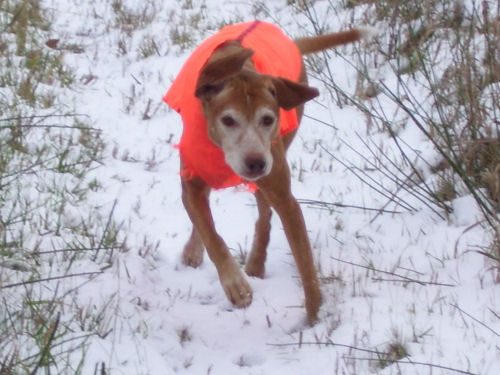 Although she always loved her day hikes (right up until the last couple of months), it was no great hardship on either of us to not take her backpacking. I did take her camping a few times, and she didn't like it. She didn't like being cold or wet. She didn't like being outside at night. She was always nervous in the tent, and didn't catch on to camp etiquette the way Chips did. So I never felt bad for leaving her home. She was also not the one-person dog that Chips had been, so she happily stayed with Om.

The last good picture of her was taken the weekend we visited Chuck and Sylvia in December. You can see that at Engage, Embrace, Enjoy if you wish.

I want to share a video with you. This was made by Wendy Francisco, wife of Don Francisco, a long-time Christian musician and singer. Many of his songs have touched me over my adult life. One that particularly helps me is I'll Never Let Go of Your Hand. But this video is about DoG and GoD. Very cute, very short, very true. Enjoy

Oh, and the rest of Maggie's nickname? I think "Sweet Potato" is obvious from her color. But I've always known she was a sweet potato PIE because of the whipped cream at the end of her tail! 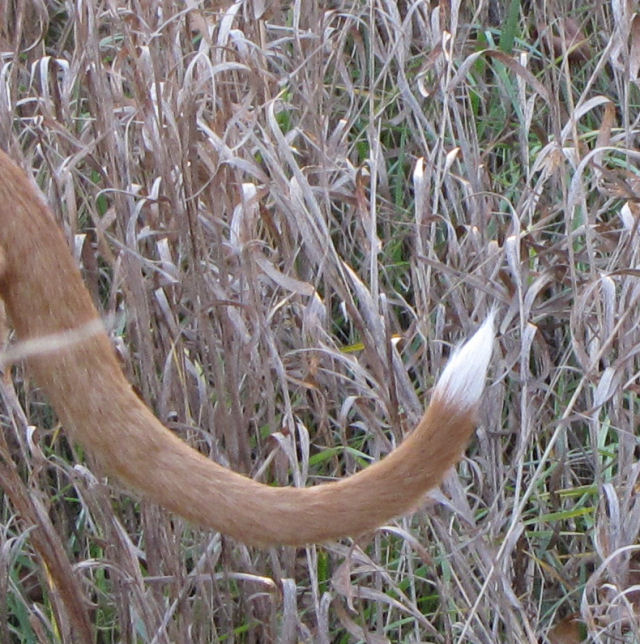 The Quality part of the day was definitely not the final goodbye, but I have many great memories of our time together. Quite a few people have already told me on Facebook that you felt you knew her too. She's gone on to the next part of the journey. Safe travels, Sweet Maggie.

Aw, what a beautiful tribute to Maggie. I love the song...simple, yet so powerful in it's message.

Hugs and love, Sharkey--I know how hard it is to lose an animal friend. I hope you find some laughs in the memories you shared with her. She sure was a beauty.

There's a tear in the corner of my eye as I read about the passing of your beloved companion and our friend. She was a very sweet soul.

Sorry for the loss of a faithful companion. We on the web have enjoyed knowing her. Thank you fo sharing this final tribute.

We ramblers send our love and blessings - Maggie was only known to us late in her life through the blog but we all agree she was a grand old lady. God Bless Maggie.

Farewell sweet Maggie. It's always sad to hear about a fur baby crossing the rainbow bridge. Hugs to you.

So sad to lose a pet and one that was that tough in her life...must have been hard. My dogs are the kids for my wife and I...Boston Terriers. One male one female...they fight and wrestle just like two young kids although they are 5 years apart in age.

Having lost my own Maggie almost a decade ago, it made me especially sad to read about your Maggie's passing. What a lovely tribute! I'm glad you decided to take her in and I'm certain that Maggie felt loved up to the very end.

I'm so sorry to hear of your loss. You and Maggie had shared so many good times together and I always loved to see the pictures of her and you.

Our dog Kansas went to heaven last November. After 16 years of friendship, we still miss him.

They say time heals all wounds, but the loss of a great friend and companion must never erase the great memories you had together.

Remember Sharkey, she will always be with you.

So sorry for your loss, Joan. I have a real lump in my throat after reading this. God bless.

hello maggie its dennis the vizsla dog hay gudbye and run free over the bridj!!! hav fun running and playing with all the other frendlee dogs and kitties wot i am shoor yoo wil meet their!!! and if yoo run into my sister trouble the kitty their try to stay on her gud side ha ha but if yoo see my sister pooh bear the kitty do not wurry she is verry sweet!!! i wil miss yoo!!! ok bye

How wonderful that you took her in to begin with, and then loved her so.

Chuck directed me this way and I wanted to say I'm so sorry about your loss. Your story of her was awesome and the pictures are beautiful.