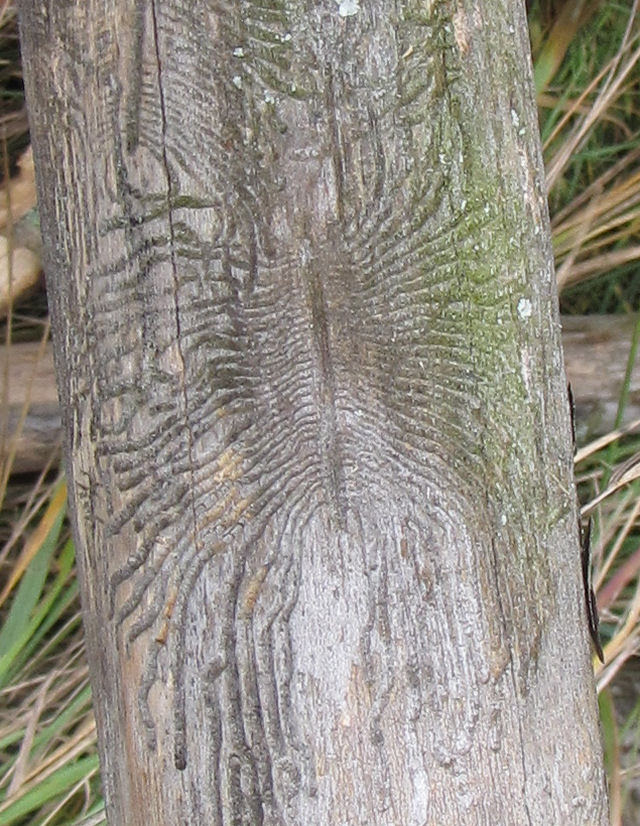 I've been working on that trail obstruction, and I found some nice bark beetle galleries to show you. This tree does happen to be an Elm, and it was bark beetles that carried the Dutch Elm Disease that pretty much wiped out the American Elm, but the beetles themselves were not the problem, and these galleries tell me that it wasn't even made by the disease-carrying beetle. 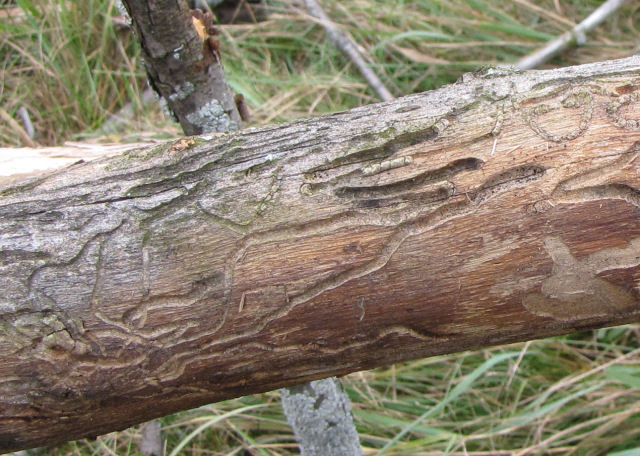 Not all galleries are patterned, some are just twisted passageways like the picture above. You can find these tunnels under the bark of many dead or dying trees, not just elms. I learned a lot, checking this out to write about. European elm bark beetles have the main egg laying chamber running with the wood grain, and side larval tunnels running across the grain, like these pictures. The native elm bark beetle builds its chambers at 90 degrees from this, and the native beetles are the ones that carry the disease. The European beetle is smaller. 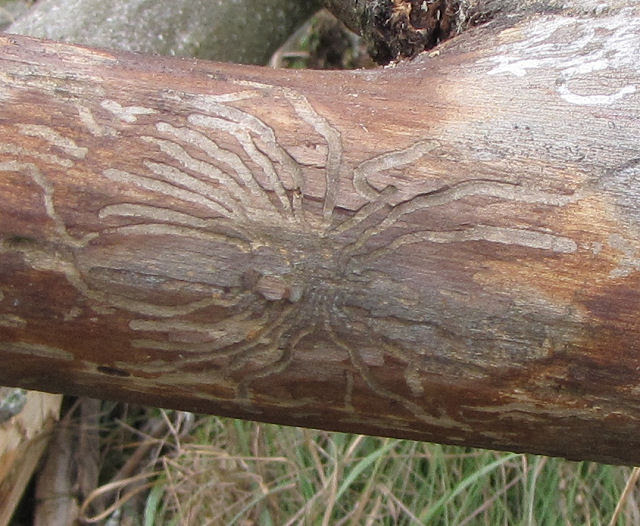 For the most part, bark beetles simply help break down dead or dying wood. But they get a lot of notoriety when there is an outbreak of some disease-carrying kind that infects a large number of trees. I've included a link to more info below.

The patterns on the wood are amazing. I sometimes see similar patterns but I really never knew what made them. I enjoyed the information and the differences in the bark beetle and the disease-carrying kind.

Thanks for stopping by, the photo challenge will be open all weekend so there is plenty of time. I would love to have you join us.

This is all unfamiliar - and quite interesting - to me. What intricate patterns these critters make in the trees! Nice photos!

amazing, you get a very good picture.
nature paintings are beautiful and often resemble something

wow, very interesting pictures and info Sharkbytes, i love the patterns, it is very amazing to me how these patterns were etched in the trees.

thanks a lot for the free ad

Awesome finds Sharkie. The pattern are so unique!

The patterns are amazing, without your explaination, I would think they are created by aliens.

Naughty rascals. Ugh. It would be cool except they are killing the trees.

It looks like they carved out pictures of other insects on those trees... how interesting.

Hi Squirrel Queen- I won't make this contest, but maybe another time. You had great pix! Thanks for stopping by.

RNSANE- I've seen really large ones on pine, but I didn't realize that there are many similar beetles that leave the same patterns.

TOP Games & blackberry - they do look like they should BE something alive, themselves, don't they?

Hi betchai- I thought maybe quite a few people wouldn't have seen these before. Well, thank YOU for stopping by and commenting.

Vanilla- they are unique, and yet common. I've seen them on many different kinds of trees.

Hi rainfield- Aliens! I like that. They are kinda spooky.

Lin- they are cool. They actually perform a good service unless they are carrying some disease.

LaShan- that is sort of an ironic kind of puzzle box effect, isn't it?

I remember the first time I noticed patterns like this. I wondered how they were made. I thought maybe it was just a pattern made by rot or something. I found out the answer by accident one day. I like the information you've given about it. It's actually much more than I read before.

Hi Ratty- Did you see the beetles? I've only seen pictures.

I've never even seen pictures of the beetles, but I was just looking at more markings like these just half an hour ago.

Yes those are good pics.

Notice how the galleries never cross each other? Some bark beetle communicate by sound so that this can not happen.

To limit the amount of beetles in a host tree, bark beetles use pheromones both aggregating and anti aggregating.

Most carry pathogenic fungi with them that will help to kill the host tree. This often gives the wood a blue color.

Hi arctos- Thanks for some additional information that is really interesting!