Here are the other five pictures that I selected from my walk on the Lake Michigan Beach early yesterday afternoon. 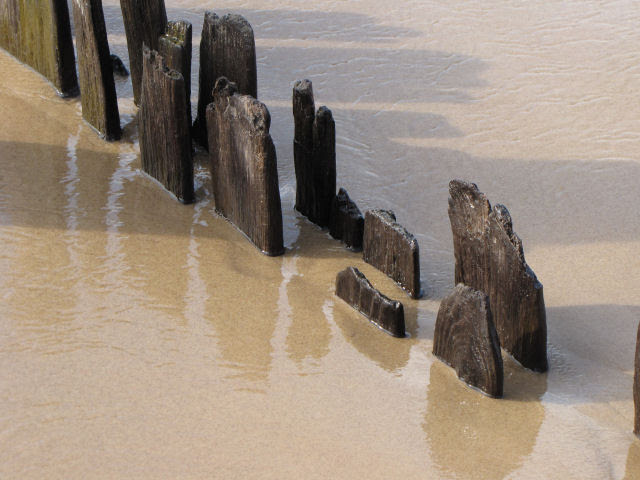 I think this is one of my favorites, even of the 10. I took a lot of pictures of the waves running along these eroded pilings. The water coming in was interesting as it broke in foam along the wood. The water running out was interesting as it swept back, sucking the water from the sand. But then I realized that there was just one moment after the wave ran out when the sand still had a film of water and showed a reflection. Then the sand absorbed the final moisture and the magic moment was gone. It took several tries, but I "caught" it. 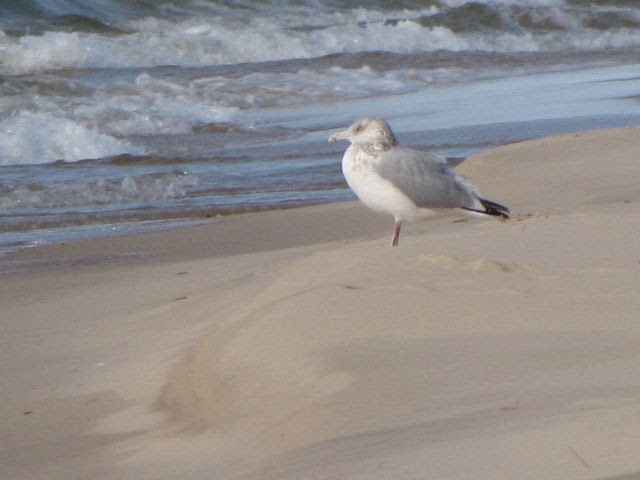 This is just a lone seagull. It's not even really focused very well- I had the telephoto out too far to result in a crisp picture. But when I looked at it later it seemed to capture the lonely feeling of the beach on this sunny but chilly day, with moderate waves. 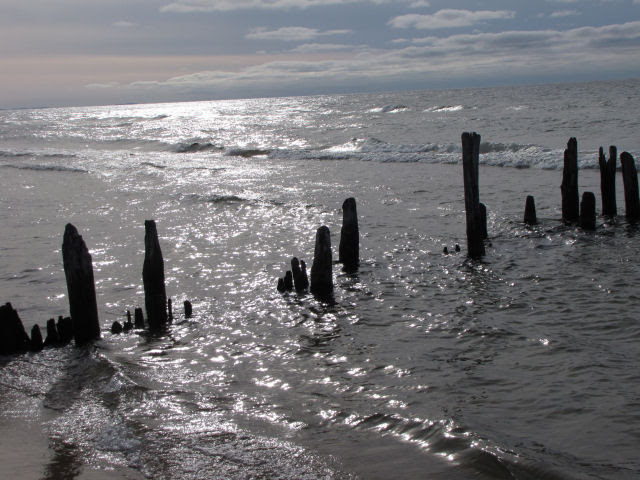 When I turned around and faced south, instead of north, there was the sun on the water. Yet, I think that even though this picture shows more sun than the other "scenery" picture from yesterday that it actually looks much colder. 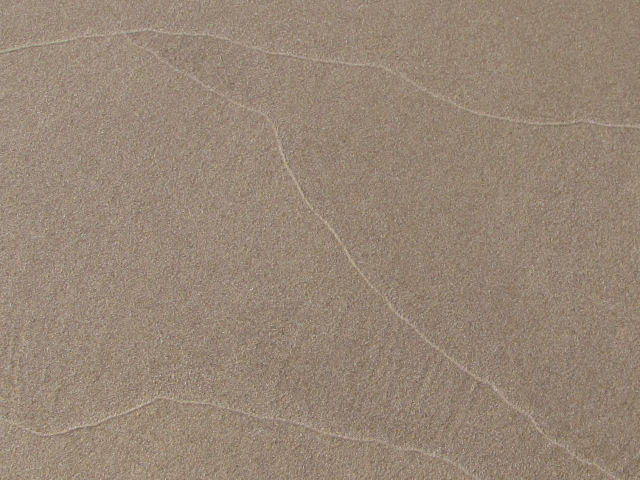 I'm always fascinated by these lines in the sand. They are just ridges that mark the extent of the reach of previous waves. Of course, any that are covered by subsequent waves are washed away, so the patterns of the lines change every few seconds. I seem to come home with a collection of pictures like this from any beach/camera opportunity. 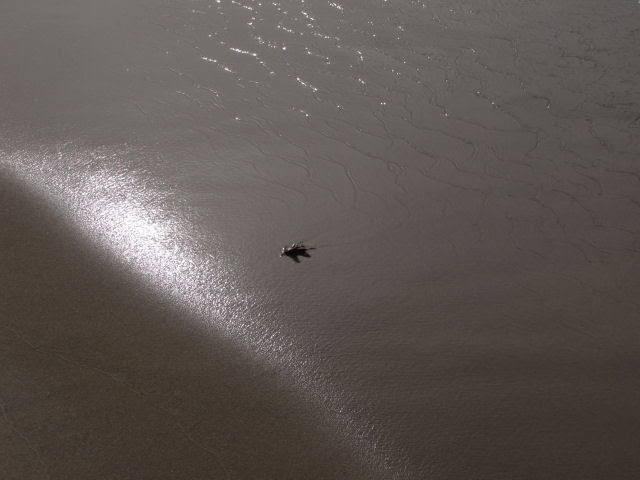 Finally, there is this one. I took the picture and thought to myself that it was probably just going to be deleted after I got home. I was trying to catch a picture of a leaf being caught and carried off by a wave. But when I looked at it (and this one really needs to be viewed larger), it turned out to be such a complex mixture of textures and shades of gray that I think it is one of my favorites!

I hope you have enjoyed this walk on the beach! Chuck, over at Secondary Roads, liked yesterday's picture of the single oak leaf. In fact, he has written a poem based on how it made him feel. You can read it at Oak Leaf on the Sand. Thanks, Chuck- I like the poem!

Neat row of wood planks. I love how you captured it Sharkie :)

Wonderful pictures...seems cold and lonely at the beach now but quite beautiful. I enjoyed the lone oak leaf photo and your friend's poem as well!

I like the photos of the decaying wood in the water, reminds me of the famous photo of the jetty at Ullswater :-)

wonderful photos! I could almost feel like being in the beach too :)

Love the magic of the moment captured in the first image. Like you, my favorite is the final, monochromatic, image with the play of light, shadow and textures. The emotion fully captured by the presence of that single oak leaf.

Oh, looking at these photos makes me miss the ocean and its beaches... Back in the late 1980s I lived on Cape Cod, and spent a lot of time near the water. Then I moved to New Mexico in 1988, and I have not seen an ocean since.

I think I agree with you, and the first photo is my favorite too. Beyond just the qualities of the photo itself, it has an aura of mystery of times vanished into the past, with the ruins of the old pilings.

Fabulous "walk on the cold beach" and I thank you for sharing it. I really love the old pilings at the "magic moment"--that photo is a real winner! Gee I miss being near the water--I'll need to figure out a field trip of some kind soon!

I love that first shot for me the angle is just right.

I love deserted beaches, not a thing we have too much of here-too many tourists!!

That first photo is my favorite. There is just something there--LOVE it!! You always amaze me, Sharky. :)

VS- Thanks, and thanks for the award. I'll pick it up tomorrow.

Hi Carmen- It was chilly, but not as cold as one would expect for November!

Lanterns- I don't know that picture. Maybe it's more famous in your part of the world, but it sounds nifty.

czaroma- Oh- that's what a blogger loves to hear- that I made you feel like you were there!

Thanks, Chuck- funny how it's nothing or everything.

Hi Jaya- I also like that the shadows go one way and the reflections the other. I didn't see that till I got home and looked at the pix.

Karen- how far from the water are you?

Mike- you might note that I had to wait till November to try to find a deserted beach. We are overrun with tourists in the summer.

Lin- I like how the shadows and the reflections make a chevron of echos of the wood.

Beautiful photos, and the third one is just stunning!

More great beach photos. I especially like that first one with the wood, but they are all very good.

Icy- thank you! But it's all thanks to the sun. I just composed the shot a bit, but basically pointed the camera and pushed the button!

Ratty- yes, I really like that first one. It has a lot of motion even though there is no wave in it.