Snow Bird is Blue- and Not from the Cold! 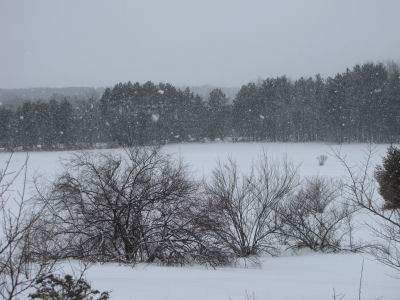 Who-eee! We finally got some useful snow today! It is wonderful. But the above picture isn't too special, its just to show that the snow arrived. 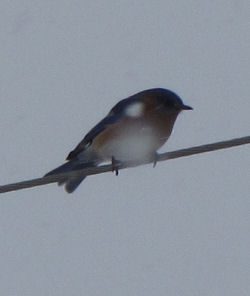 What I really have to show is two not very great pictures, but they prove that what I had thought I was seeing is true. That crazy bluebird has stayed here all winter. He and his mate were right there on the power line when I headed out on my snowshoes this morning. 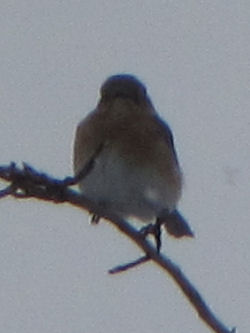 They flew off before I had a chance to get pictures of both of them. When I was just about back at the house they both flew over my head and stopped in one of the apple trees. It was really too far for a good picture, but I gave it a try. I couldn't even tell which one I had a picture of till I looked on the computer. Both pictures are of the male.

Well, they have made it this far. Hope they can hang on till spring!

P.S. We spent most of the day without water, but with the help of some friends and some more money (sigh), we now have a new pump, and water again.

Wow, they've made their home up there perched on those wires :D They like the scenery. Glad you have the pump and water again.

Why all the birds from every where love power lines?

A couple for years ago, we had a pair of bluebirds winter over here for two years in a row.
Glad to hear that you've got water again.

Hang in there, bluebirds! And glad the water is flowing again!

Bluebirds! I don't think I have ever seen a real one. They are our state bird (NY), can you believe it? It should be the crow. lol

Glad you have water back!

Brave little birds to spend the winter.
Glad to hear you got your water fixed.

I'll bet those two are regretting their decision to stay where it is cold and snowy! They sure are colorful and nice to look at though. Glad they stayed!

Amazingly for such a little creature that the birds don't seem to see cold at all!

Those two obviously don't mind the winter that much. I hope you continue to see them for a long time. It would be fun to see them when spring arrives.

That's a beautiful blue bird! I can't believe they didn't go south for the winter..

Wow! The 2nd picture is great!

I guess they must be finding enough food to survive the winter and it's nice that they are giving you so much joy in that snowy scene. You really appreciate their presence!

Wow- did I forget to reply to these? Guess I was tired.

Jo- I don't know where they have holed up. My guess would be the cemetery, but I'm not sure.

Chuck- I never knew they would stay. They look so fragile.

Dennis- Yes, I hope they make it. I'll need to repair/ clean the nest boxes early.

Mrs. M- Oh- put out some boxes! They should come. They are making a great comeback even in NY.

Ann- they do look brave!

Lin- you have to wonder how they decide to stay... do they have some place they feel really safe and warm?

Vanilla- Well, they don't hang around in the open too long. Those puffed up feathers only work so well.

Ratty- I'll try to watch for them early before others arrive. I'm sure I can't distinguish this pair from others after that. I'm not THAT good!

Icy- I just love them! Nice for me to see, but they look so cold.

Beth- the camera does well with a plain sky in back!

Carmen- I have a little bit of bird food - we had to give up filling the big feeder. But maybe I could try to see where they are going, and sprinkle some seeds near there.