Yellow (and Maroon), but No Mystery 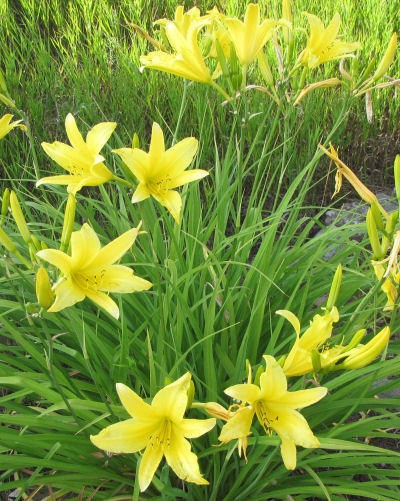 I've been trying to spend a little bit of time each day since I got home trying to reclaim my poor, sad flower beds. Between poor soil, moles, and neglect, things have to be tough to survive here! The day lilies are always a success. The first picture is my drop-dead favorite lily, usually called a "lemon lily." They are old-fashioned, and grow in profusion, quickly! I love the clear yellow color, and how long they bloom. Although each blossom on a day lily lasts only one day, they produce so many buds that the blooming period is a couple of weeks. 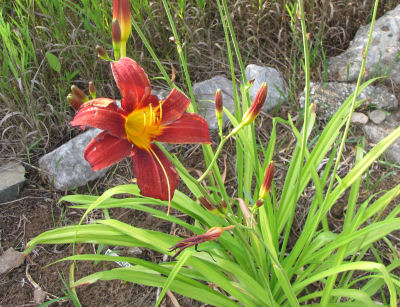 Here's another old-fashioned lily that most people can get a hold of for free by hunting near abandoned houses or in ditches. I don't know that it has a specific name. As you can see, it's a deep maroon with a golden throat. I like it a LOT too. It does not spread nearly as quickly as the lemon lily though. I just have two little patches. On the other hand, I have so many lemon lilies that I'll gladly send you some for postage money if you want. 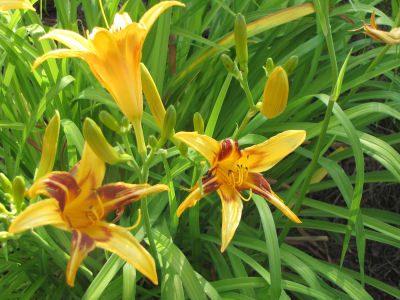 A few years ago I actually bought two varieties to complement the other two. This one is called "Young Love." I wish the yellow were a little more yellow and less gold, but I like how it's the opposite of the one above. 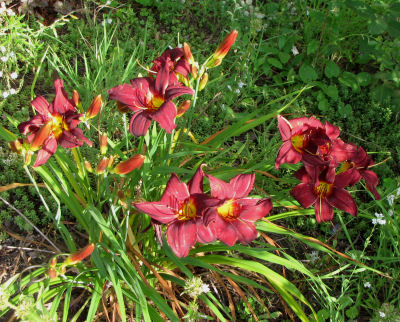 Finally, I chose this one called "Revolution," for its dark red color. It fills out nicely, and I think I can split it this fall.

So which ones do you like? The old or the new, or a mix and match selection? I'm working on the Hosta bed this week. It's a mess.

Posted by Sharkbytes at 9:47 PM

The gardens have a way of reminding you that you haven't been home enough this summer, don't they? Mine was calling this weekend too. I had to clip this and deadhead that. I removed my lilies because they required deadheading--a chore I don't enjoy. But I do enjoy seeing yours! :)

The home I purchased had not had the flowers tended to since last Sept...but I have hundreds of day , tiger..calla ....I love them and am slowly getting their environment cleared of weeds and other unwanted plants. I think I may have some of those dark red ones. You can give me "thinning" lessons when I come up in August!

I love the revolution!

I have finally managed to leave a test comment on the 10th so here goes, there is nothing more frustrating than pressing that button and all your thoughts go into the ether never to be seen again :(
Let me get up to speed :)
Love the nipplewort, it grows to about 3 foot here, I recognised it from your first photo, I have never seen it in such large patches. As for the tufted loosestrife we also have that but I also did not recognise it, glad you hunted it down. Love the lily's. I hope this message makes it

We are Lily lovers over here. This is the first year for our garden over here. We picked some day Lilies in the woods. We also bought some Oriental Lily. The lily garden has begun.Yours look great.

I like all shades of day lilies. Each has it's unique appeal. They all speak of summer, joy and freedom. I don't know why freedom--it just works that way for me.

Oh, I missed my mystery over here.

I like a mix of different colors. Mine don't seem to be doing too well this year. I think they need some TLC.

I like a mix of different colors. Mine don't seem to be doing too well this year. I think they need some TLC.

They're all very pretty and it would be hard to pick just one as my favorite. I think the variety of colors is the best. A little bit of everything.

Your lilies are gorgeous! Such nice, vibrant colours... I think the deep maroon with golden throat lily is Chicago Red. I like Young Love so will have to look for that one.

I like them all equally. I've recently discovered lilies because they grow all over at Island Lake park. So now I know them when I see them elsewhere too.

Lin- I don't like plants that have to be clipped continuously, but the lilies are very tolerant

Loretta- If we have time, you sure can have a pile.

Hi Joops- yes, I like how dark and mysterious it is.

Carol- I don't know why you were having comment woes. Hope it works now. Interesting that you knew the nipplewort so easily. I think I won't forget it now!

Hi Russ- you are Grampy, right? A lily garden is pretty easy. You and Maya can do it together!

Stacie- they are very showy for very little work.

Chuck- You could try for red, white, and blue... although I don't think lilies come in a true blue.

Hi rainfield- well... there will be more mysteries. Glad you stopped by.

Hi Five O'Clock- At least they don't need a huge amount of attention.

Ann- I seem to be stuck on yellow and maroon. I like them together. I'll skip things like pink and purple.

Hi Gnome- I've found several names for similar ones to the old maroon one. I wonder if they are really the same, or if someone developed a similar one so they could patent the variety.