This was a mystery a week in the solving. I think I mentioned last Saturday that a few of us took a walk between workshops and dinner. While we were walking, we came across thousands of these small "fruits" in the trail. 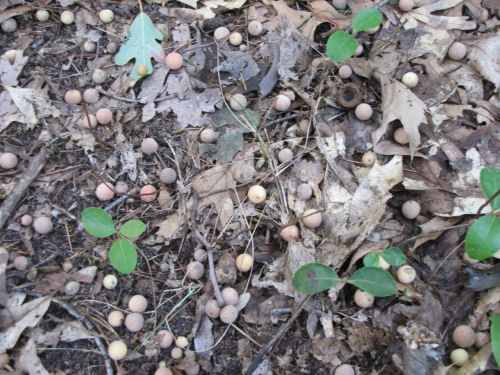 The picture looks mostly brownish, but the balls ranged from light pink to pale yellow to grayish brown. They are about a half inch in diameter. One of the other walkers also knew plants pretty well, and we were just stumped. What were they?

I looked up hawthorn and hackberry, but couldn't find a good match, although both of those can be about that size. I cut one open, but it didn't seem to have much structure inside.

So... tonight, my buddy Ester is here. (There will be a nice adventure story tomorrow), and she's another plant weenie. She thought it looked like some kind of gall.

We cut one of them open now that they are quite dry, and look what we got! A very definite structure, but not that of a fruit. 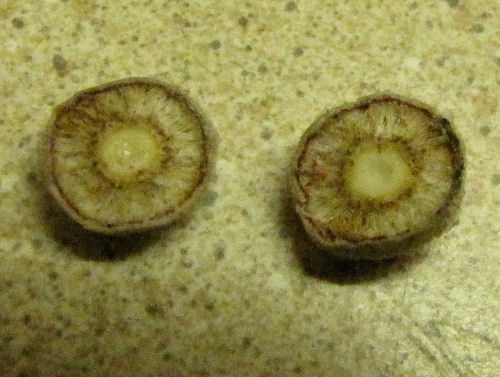 OK, very odd. Any galls I've found were attached firmly to leaves or branches. But some internet searching revealed that this is probably a succulent oak gall, caused by a cynipid wasp. There are dozens of species, and each targets a particular oak creating unique galls.

A gall is caused when an insect "stings" a plant with its ovipositor, and lays an egg. This irritates the plant which grows non-typical cells to surround the egg, which creates the gall. I have some pictures of other interesting galls. Maybe I should feature some of them in the future.

Since the interior structure (of the one I cut open) doesn't have a tunnel to the outside, the larvae didn't develop and burrow out of the gall.

But at least we solved the mystery.

Posted by Sharkbytes at 9:58 PM

So, the Oak tree grows a gall to kill the larvae.

One never knows what can of worms will be opened here.

well the gall of those insects to irritate the plants causing them to form galls :)

rainfield- It just tries to compartmentalize the irritation. The larvae is very happy in its little home

Ann- They certainly can be galling!