For our second day of hiking in Vermont, we planned 9.6 miles, all of it on the western portion of a loop trail that encircles the city of Middlebury. We briefly met with the man who has been the driving force for this effort for 20 years, John Derrick. He had provided me with maps and info ahead of time. Despite the bad storm they'd had, and extensive clean-up work he said he had to do on his farm, he was out mowing the trail, too. Trails never happen without passionate, dedicated people who work hard to create and maintain them. We had hoped to take him to dinner, but he said his wife told him he was already committed to something else that night. 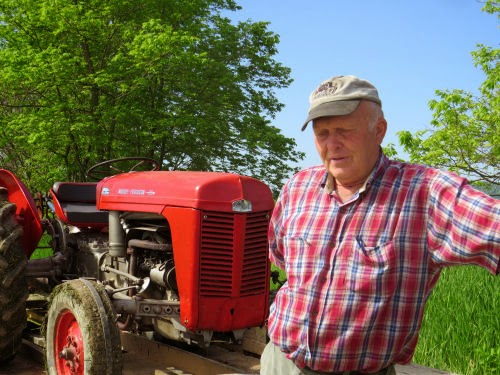 So, we headed off along the edges of some good-sized farm fields. It was quite reminiscent of portions of the Finger Lakes Trail... except for those Green Mountains still ahead of us in the distance. 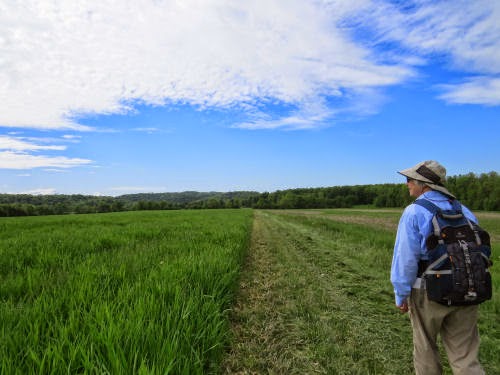 Our blazes for most of the day were the TAM logo. It's a silhouette of mountains and hills, with some evergreens, and the letters T-A-M in the base of the mountain. But... um... don't tell John, but we decided that from a distance they look like a cow facing left. So, we just followed the cows.

One of the best sights of the day was a bobolink singing for us on a shrub. I haven't seen many since childhood, and I hope they are making a comeback. 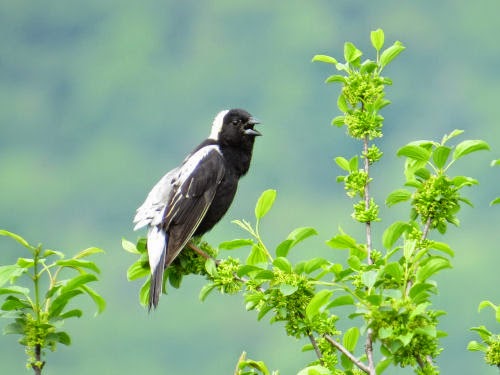 Much of the piece in the middle of the day that was pretty much straight south was in the woods. That was a beautiful walk along the base of a ridge where we could look out to our right into sunny wetlands along a creek. Then we entered Middlebury College property, and the trail wove in and out of woods and meadows, and finally (didn't) go through the college solar array. We did take a wrong turn here and got to see the panels up close, and also got to walk at least an extra half mile to get back to the correct place. Who would want to walk under 10 miles for the day, right? 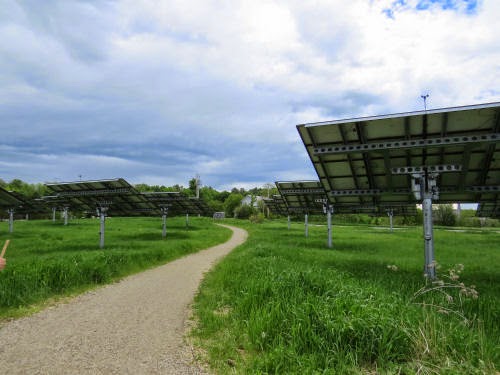 We saw very few real cows on the hillsides, even though it's dairy country. John told us that most cows are "kept on concrete," because there isn't enough land to both graze them and raise feed for the winter. He said his own small herd does get to go outside. It seems sad to me that some cows don't get to be outside at all. 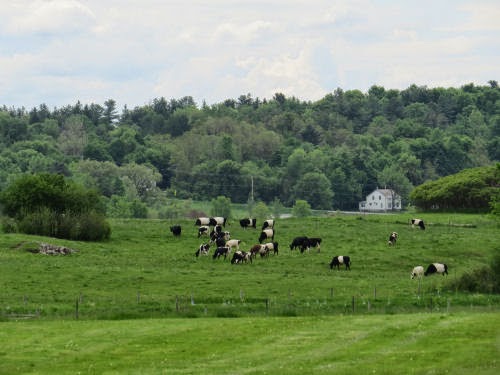 After following a ski trail around a golf course, and getting rained on a little, near the end of the day we crossed Otter Creek on the Boathouse Bridge. It's a sizable suspension bridge, and John said he built it. I think this means he planned, organized, raised funds, and also worked on construction. I'm sure he had help! 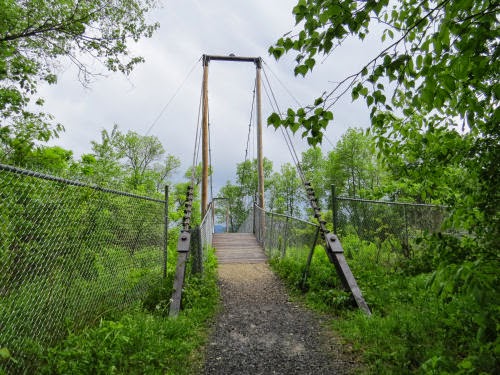 Here's the map for the day. The eastern half of the loop is the very thin red line. We chose the west side for a rather stupid reason- it was the side John highlighted when he sent me the map. So I thought the NCT had decided to follow that side. I guess either option is fine. The east side is more "urban," (we were told), but also has some nice woods and nature preserves. I wish we'd had time to do that side too, just for comparison. 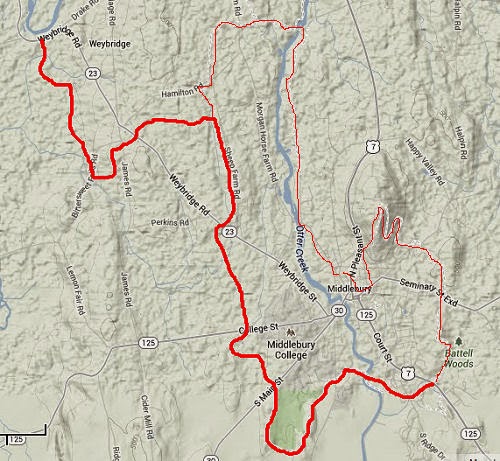 Sections like this are part of the reason I love the North Country Trail. I love the wild and high spots, but I also love the patchwork of experiences that can be found working one's way through the landscape, whatever it is. You'll never get tired of the "same old thing" on the NCT.

I love your pictures this time. The bobolink is fun, but I'm fascinated by solar power. Then the suspension bridge. I've always wanted to walk across one of those.

A very nice looking area. I've never seen a bobolink before, even in pictures. What a sweet looking bird

I had to interrupt my reading about John as I tried to discern the manufacturer and age of his tractor. No joy there . . . oh well.

The journey will never end.