Some of you know I'm a railfan. Imagine my shock today to discover three spiffy and newly painted engines in some unknown color scheme idling at a road crossing. 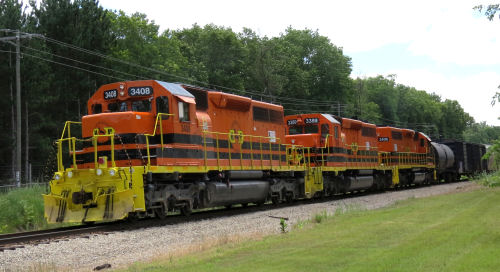 I thought I knew where I was. I thought that was part of the Marquette Rail line.

Got home. Enlarged the pictures so I could read them. It is Marquette Rail. 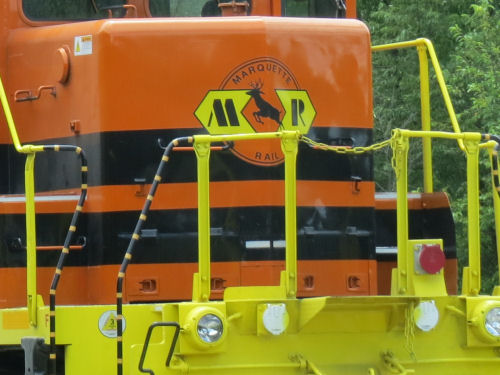 That new paint scheme was niggling at the back of my mind as one I should know. Yup. Got on line and discovered that MQT is now owned by Genesee & Wyoming out of New York, the line that began and operates in my friend Irene's back yard. Seems they've been quietly buying up tons of short lines and now are quite a large system, at least by the standards of this day and age of little rail use.

Apparently they let the short lines they buy keep their own names, but see how the logo mimics that of G&W?

I did think the deer leaping in front of the train (to get smashed) was rather realistic. Oh, you don't think that's what they meant to convey?

Posted by Sharkbytes at 9:46 PM

The colors are cheerful. I like how they kept the same logo type. Around here it's the Bessemer Lake Erie RR. I can't recall what color the engine is though. All I can remember is the endless number of rusty looking cars that go by

That new color scheme is very spiffy. Nice logo too.

Maybe it is that the deer is just cuter than the ampersand?

So much better than letting the engines get faded & rusty!

So much better than letting the engines get faded & rusty!