Taking a day off from Flower Show pictures because tonight I went to a reader's theater production of an original play called The Amazing Fair Women. It was written by local writer Jane Carpenter, and provides an historical and humorous look at the women who were involved in creating the Women's Building of the 1983 Columbian Exhibition in Chicago. Christine Plummer of Ludington directed.

The play provides a setting in which many of the women who contributed to the creation of the building and exhibits look back at the experience, as if they were still alive today.

In this scene, Bertha Palmer (seated), wife of Potter Palmer, of Palmer House fame, interacts with Sophia Hayden (far left) and Enid Yandell (middle). Palmer was the President of the Board of Lady Managers, Yandell was a sculptress, and Hayden was the architect for the stunning building at only 21 years of age. 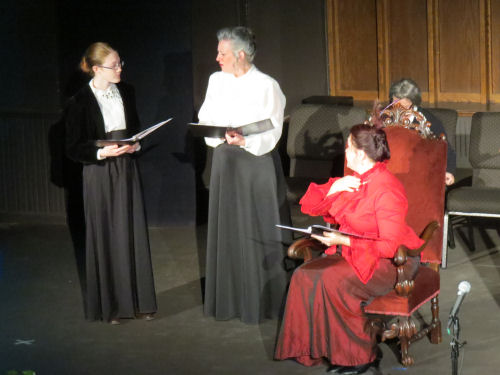 The play was more of an historical lesson than a story with a plot, and the points were enhanced by a screen with photographs of the actual parts of the exhibit or people under discussion. 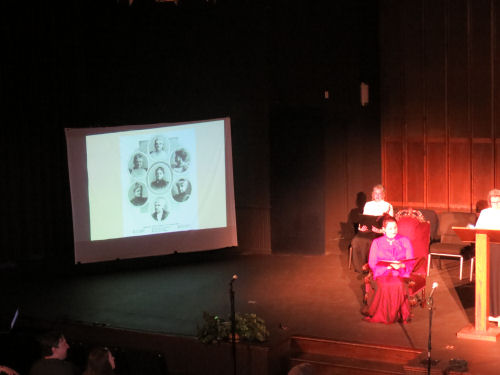 One of the funniest scenes was between Bertha Palmer and Edith Clarke. Once it was decided that there would be a display of books written by women there was little agreement on how they should be displayed. The Dewey Decimal System was quite new, and Clarke, who was head cataloger of the Newberry Library (Chicago), wanted the books organized and displayed using that system. Palmer was more interested in the DISPLAY of the books, and apparently the two women disagreed violently on this point. Clarke persisted and almost finished cataloging the 8000 books by the end of the Exposition. 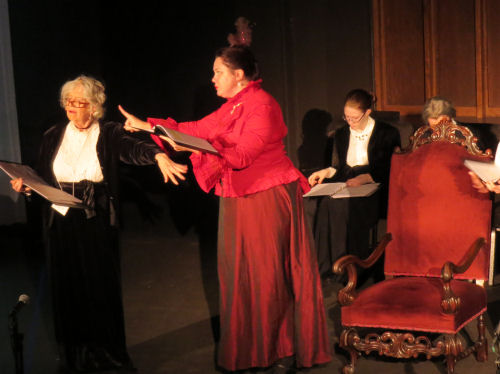 There were other well-played and funny moments as well. You only get to see scenes where my pictures turned out.

The play ended with the women learning about a thing called the internet, and they all were given smart phones and told how to look up their names and the Exposition on Wikipedia! 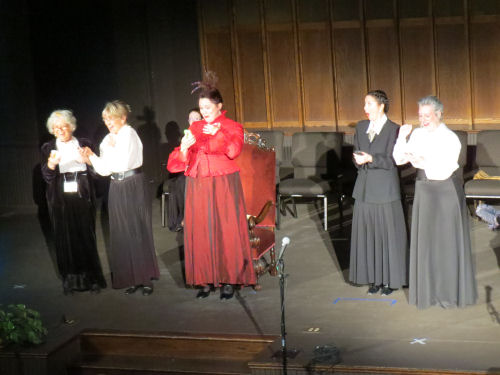 In the gallery at the Arts Center for this past month there has been a Celebration of Women in the Arts, and this play is the culmination.

In other news: I wrote in the morning, and did a bunch of odds and ends in the afternoon. Sometimes I'm not sure if I'm making progress on anything or just making a bigger mess.

Email ThisBlogThis!Share to TwitterShare to FacebookShare to Pinterest
Labels: Ludington Area Center for the Arts, theater