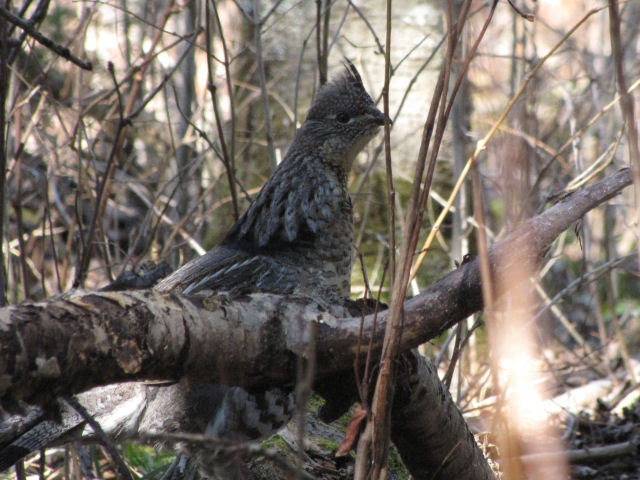 I was working on the sorting the hike pictures from last May (still not done!), and decided to share this ruffed grouse. 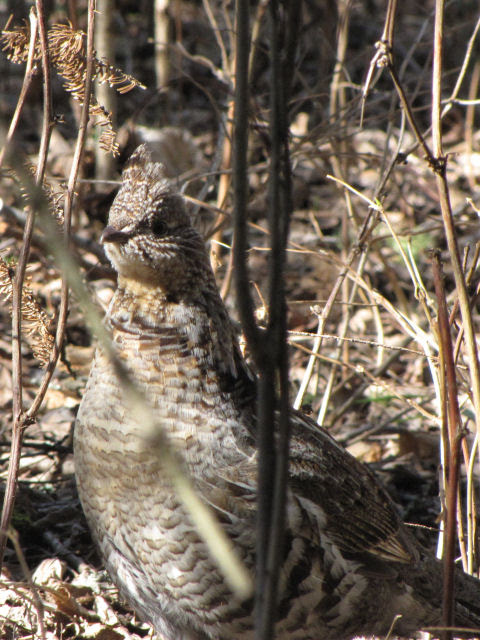 It's a very common game bird of North America. It has a ruff of feathers around its neck that it can flare, and is most often heard rather than seen. The males "drum" to attract females. They beat their wings quickly and it sounds a lot like someone trying to start a lawnmower with a pull cord. Very much like a put-put-put-put that then dies down like it didn't catch. 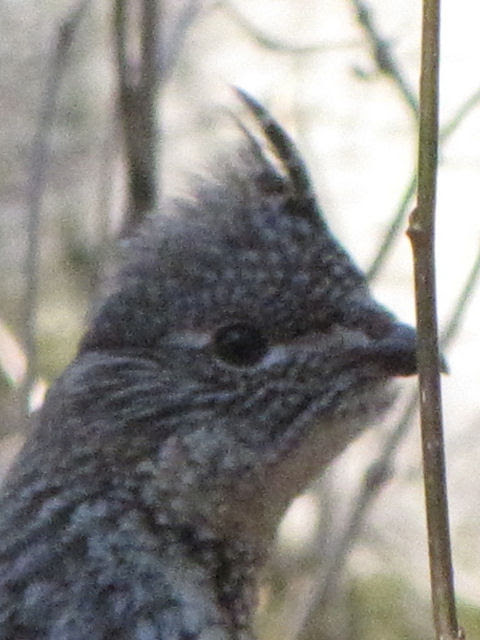 It didn't focus as well, but here is a closeup of the head. See its little crest? I kept this picture, even though it's not crisp, because it does have that crest raised. They also spread their tails into a fan, but I didn't get a picture of that. 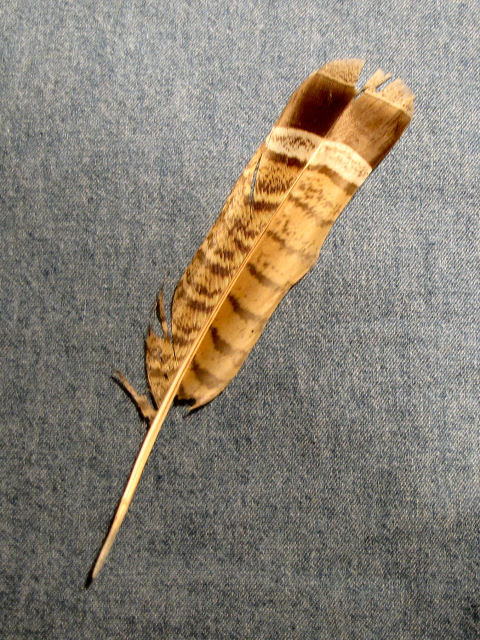 And, they often lose feathers that you will find in the woods. When you walk nearby, usually one or even a whole group, will suddenly burst into the air going in all directions at once. This is to confuse predators, and it really is very startling! Although it's possible to find an occasional feather from any bird, this tail feather from a ruffed grouse is very common. So common that I've pretty much stopped picking them up.

Hope you enjoyed a little trip to the spring woods.

I've never seen a ruffled grouse before...I love all the new creatures, birds, and such, with which I'm becoming acquainted.

Lovely pics, majestic birds. Catching up, I smiled at your Valentine's poem. Hey it is good to pay bills an not owing a cent :)

I used to hear and sometimes see grouse when I was younger. It's been a long time since then. As you say, it certainly is startling when they fly off.

One time a grouse flew into our giant windows back in New York and killed itself. Tucker found it and was very, very, very interested in picking it up and carrying it around.

He is a cutie. I've never seen one close up before so this was a real treat. Great shots.

I haven't seen them around my area...maybe I'm not looking hard enough? Such pretty birds, I love their crested heads.

It is good to know more things, and this grouse is one of them.

I've read about them, but I've never encountered one. So that's what they look like. Thanks for sharing. I wonder if there's a relation between the bird and the verb...

I've heard of them but I don't recall ever actually seeing one. I would have save that picture too. Some even though they aren't perfect shots just have to be kept.

Look at the grouse! -Curly

Carmen- I'm so glad you like the critters! They really make me happy but I get fewer everyday pics of them because I walk with a dog most of the time.

Hi Glynis- Oh, I need to catch up with you too. Thanks for coming by.

Chuck- I'll bet you have them in the woods around you.

Dennis- Well, at least that is an appropriate kind of bird for carrying around. Sad that it bashed itself to death though.

Hi Jo- yes, they usually are more secretive, but we saw several that just walked around and let us take their pictures on that hike.

Karen- I would think that you have them.

Hi rainfield- does this look as odd to you as some of your birds do to me?

Ivy- you make me look up the origin of the verb "to grouse." All places seem to say that it's unknown but may come from the French "groucher" from which we get grouch. So not related.

Ann- I really like the bright eye in it as well.

Ratty- that extra little feather that sticks up in front is like a topknot with a cowlick!

I've not seen a ruffled grouse before either. You got great pictures of it!

Icy- They hide really well, until the just explode from practically under your feet!

Julia- thanks... this bird just wanted to strut for us, so he made it much easier to get those shots!