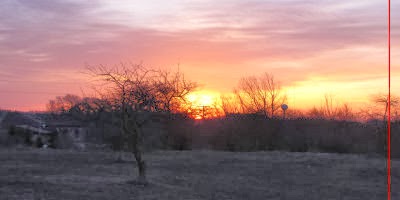 Welcome to Spring! We didn't get more than a dusting of snow, but the temperature cooled down a lot. It was cloudy this morning, but I took a picture of the sunrise on Thursday, suspecting that there might be a bit of a problem with today.

Despite my efforts to be consistent with these pictures, I zoomed this one a bit. Also, I've learned that as the sun rises it doesn't ascend perpendicular to the horizon but drifts off to the south.

Variables are: the zoom of the camera, the time of the picture relative to official sunrise time, the exact location where I was standing, the exact angle at which I pointed the camera, not to mention that when it is cloudy I cheat by a day or two. That is WAY too many to be scientific. Still, I manipulated these to make the two trees about the same size in each picture from the last four equinoxes.

You can see that as the sun gets higher it moves to the south. I think I am going to try to take a series on one day to show that track. Don't hold your breath! It will need a clear morning that I am both up in time and remember. But it's an interesting project.

I wish I could see the sunrise from the house, but there are too many buildings in the way (including one which used to be the world's tallest). :-(

A very interesting project. you did much better than I could have. i would have forgotten after the first picture was taken :)

A wonderful and interesting project.

I think you did just fine with the composition. I get it! I still have not remembered to get these kind at my place. I think the call of milk at 6 am and the morning prep for Kinder distracts me every time.

I'm glad you do this project. It's such an interesting thing. I would love to do something like this, but I know I would never remember to do it right.

wenn- it is interesting, isn't it. We just don't think about these things in our modern world.

Ann- you all are keeping me on my toes now!

Vanilla- If the cloud cover would cooperate I could really get a matching set!

Jo- Thanks- It's really neat that everyone seems to enjoy this.

Julia- hey, when I had 2 little ones this was definitely not on my mind!

Ratty- I never remembered until I had all you blogging friends to do it for!