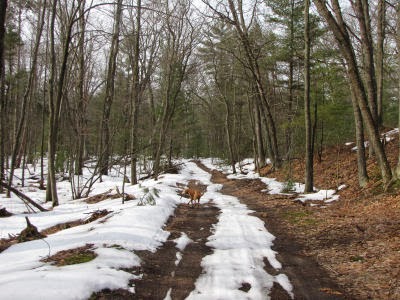 I'll go back and show you the rest of the flower show after this next installment in "Joan and Ellen's Excellent Adventures." So Ellen said, "Have you ever walked the old Pentwater Wagon Road?"

Now, I think that I'm something of a local trail expert, but I didn't know about this one. I thought maybe I'd been on part of it with another friend quite a few years ago, but it was not the same place, so I got to see someplace completely new, and it was great! The first picture shows the beginning of what is left of this old route, and also gives an idea of how much snow was left. 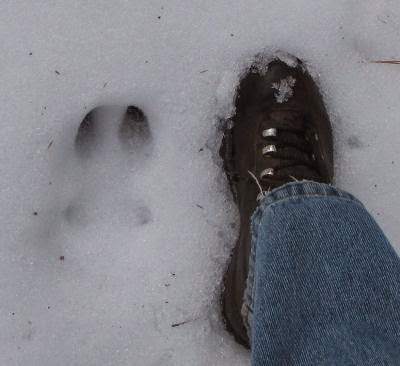 In one of the sections of snow there were incredible deer tracks. Look at the size of this print! OK, I have small feet, but this is really large! You can see the dewclaw prints. I suspect it's a buck, based on the size. 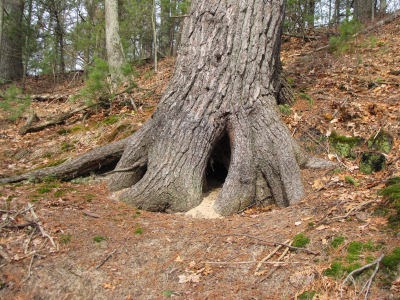 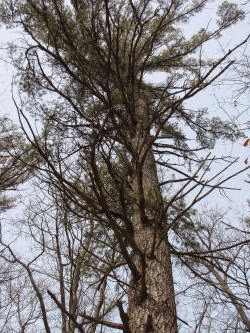 Several really large white pine trees flank this old route. Since almost every white pine in Michigan was cut in the early years of the 20th Century, it's really cool when one of these giants is located. It's possible that this one was young then, too small to be bothered with, or passed over for some reason. The bases of most of these large trees are now entrances to dens for some critter. It's hard to know what kind. It's not a porcupine- those are easy to spot because of their scat, but it could be a woodchuck, or a rabbit. It's even large enough that it might be a fox. 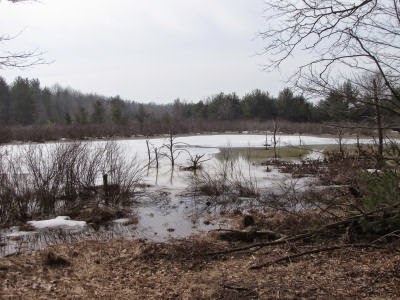 On the north side of the old road the land rises steeply, and at the top is the newer, paved road into town. I just love old, "hidden" routes like this. I've driven the high road for years and never knew that the wagon road was still open, a public pathway, just a few yards away! On the south, however, the land is nearly on the same level with the wagon road, and often fades off into marshes such as this one. 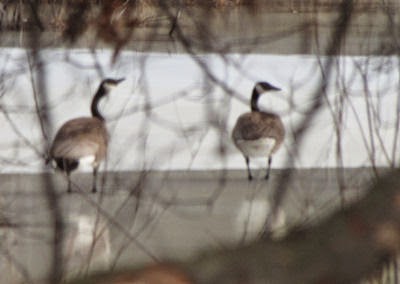 And look who else thinks that it's getting a bit spring-like! Some of the geese from Ratty's blog flew over here for the day. I thought that the reflections of their butts in the shallow water was pretty funny! 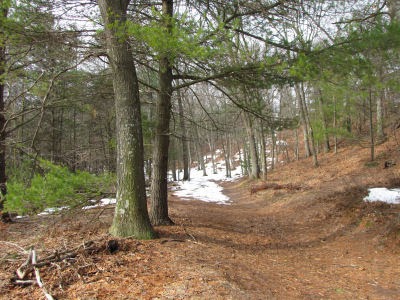 By noon the temperature was in the 50s, the sun was shining, and I was hiking in shirt sleeves. Glorious! Out and back was about 4 miles. We lunched at Ellen's on apple and cheese burritos with green tomato- apple chutney. Mmmmm. Then we knitted and crocheted, and talked about books. Maggie got to go too, of course. Did you see her in the first picture? Our timing was great, as it started to pour around 3 pm, and we've now had an inch of rain!

Looks like you are having a really splendid holiday, seeing and doing wonderful things! I'm jealous! You deserve it and I am enjoying it all vicariously!

I am very much happy to follow your trail, the Wagon Road. The feeling is like walking on my hiking trail.

That must have been one huge buck! What a neat place for a hike.

Sounds like such a fun time. The geese have now become a common sight again. I'm glad you got a couple of them too. The two that like my backyard have also come back today. It looks like spring is determined to send winter packing.

Oh that is Maggie in that picture. At first glance I thought it might be a deer and I wondered why you hadn't mentioned it being there...lol That looks like a lovely place for a hike. so wonderful to finally have spring showing itself.

i thought it was a deer in the first picture, forgot about your beautiful dog. Love your hike, the trail in the first one looks lovely.

Outdoor and indoor fun - sounds like a thoroughly lovely day. What a blessing great company is... :)

Looks like a good day, Sharky. Nice to be outside again, eh? Well, be outside and be warm. :)

Carmen- How nice to see you. Hope all is well with you.

Rainfield- snow and all? haha. The rain has now taken most of the snow away.

Chuck- Now if we had seen him as well as his prints that would have been something!

Ratty- Well, it will be ok for the snow to go away, since there is too little to ski on anyway.

Ann and Betchai- re Maggie- and that is why she wears orange all fall!

Lin- It was very nice, indeed.