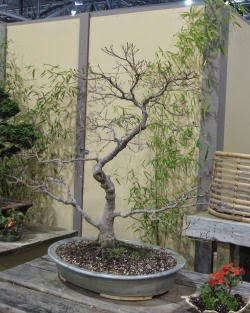 Can you believe that even with all I've showed you, and at least one more day of Flower Show pictures to share that I never did get to all the exhibits? Of course, I like to study things in more detail than some people do. I tried to hurry myself a little bit in hopes of seeing most things, but Cousin Maggie, David (Marie's son), and I quickly formed our own "slow" group, we just enjoyed whatever exhibit we found ourselves at. We did see all of the Bonsai.

Some of these trees had only been trained for a few years, and some as many as 40 years. 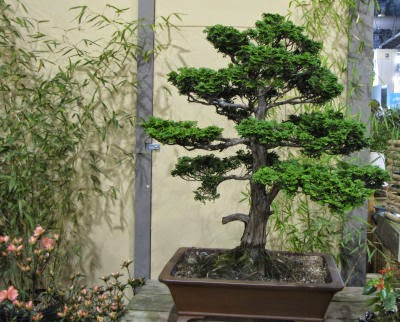 This is a fairly typical bonsai. It's an evergreen, but it didn't have a label telling what kind, like some of them did. 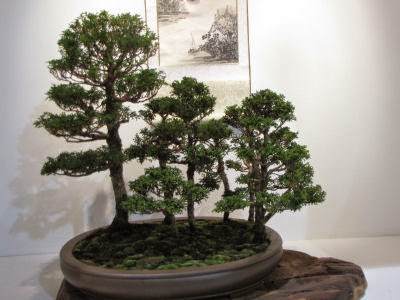 This is a group of Dwarf Hinoki Cypress. They are 60 years old, and have been trained for 40 years. Although I've seen some Bonsai, I missed the display at this show last year, so I did not really know that sometimes they can be a group of trees, like this. You know I liked the way this looks like a forest, ready for hiking! 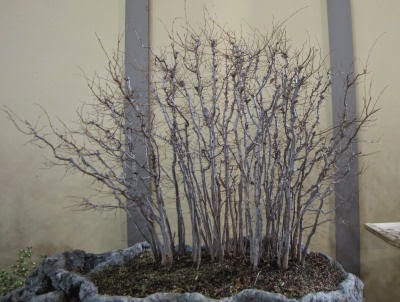 Here was my next big surprise. I did not know that deciduous trees can be Bonsai too. This is Zelkova serrata from Taiwan, and is 48 years old. Since it is deciduous, sometimes it will have leaves, and sometimes it will be bare. I think that this would be quite an artistic challenge- to plan the growth form for both of those options. I don't think I'd care for a whole room full of these, but as a variation on the theme, I thought it was very interesting. Finally, this was my favorite. It combines both the idea of the Bonsai with the miniature structure concept. I know that this isn't pure Bonsai, and I really do like the single, stark trees too, but the creation of a very realistic, tiny setting with real plants just fascinates me.

Very beautiful my dear friend. Hope to see that too up close and personal. Have a great day!

I love bonsai, but am not an expert to train bonsai.

That tree looks darn good for 48 years old. I LOVE the Asian miniature vignette. Bonsai have such character and are so well formed. What a great flower show!

They are all so beautiful. The last one is a knock out!

Just caught up with your blog, looks like you have been having a great time. I love the Bonsai - I started one 15 years ago a juniper unfortunately it was a disaster it is now about 7 foot tall :)

I just love Bonsai, I was given one years ago as a gift but not having a green thumb, it quickly died in my care. The one with the three trees is my favorite

I never really thought much about Bonsai trees, but after really looking at these I realized how attractive they can be. I always found them to be pleasant, but never gave a second glance until now. I'm glad you posted them.

Nightblastz- I hope you do get to go to a large flower show one day, or many days! They are awesome.

rainfield- me neither! I've never even tried.

Jo- They do have character... and it's all a reflection of the trainer's thoughts!

Cafe- Yes, I like that one too. It just makes me want to visit.

Duxbury- at least you tried one! You are ahead of me.

Ann- Yes, I think the one with 3 trees is just darn near perfection!

Ratty- When I worked at the Ann Arbor Matthaei Bot Garden I would sometimes help tend the space that the Bonsai were housed in, so I got to see them, and occasionally would be in the building when the club was meeting. So I got a tiny bit of extra exposure that way. But I think it's a very special art form for very patient people!