Monday was to be my longest day of hiking. It began with a very good change of plans. The Buckeye Trail map showed the route as a roadwalk on the south side of the Maumee River. It also showed that there was some off-road trail completed on the north side of the river. Let me explain.

A few years ago, the state of Ohio decided to take advantage of the fact that they still owned the rights to the canal towpaths, and they gave the Buckeye Trail permission to develop something like 49 "new" miles of trail. This allowed the off-road trail to be extended east from Florida, toward Grand Rapids (and some other places). Some pieces of that reclamation were easier than others, and where the canal route is completely gone ( overtaken by the river for example) it becomes challenging. I knew that part of the trail from Napoleon was done, but thought it wasn't completed very far. I did know that I didn't want to do much roadwalk on the north side of the river, because it would have to be on US 24, a very busy and dangerous highway. I'm no wimp; this is a seriously bad road.

However, when I talked with the maintenance guy at the state park, he had current information. He knows people from the Buckeye Trail Crew, and said that the trail was completed almost all the way to the old lock, which you can see here- the walls anyway. 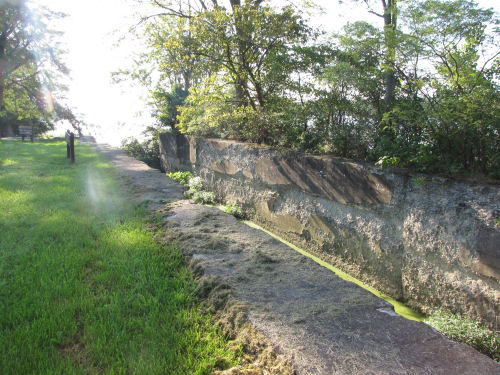 So... I decided to stay on the north side of the river. It meant some bike riding on aforementioned US 24 till I could get to the next bridge and cross to the less busy side of the Maumee, but I was careful. I decided to ride the bike first, so that when I reached the car on foot I was done for the day (except to go pick up the bike). That's psychologically better.

Most of the day was on dirt trail similar to what I showed yesterday. But there were occasional lovely grassy sections like this one. 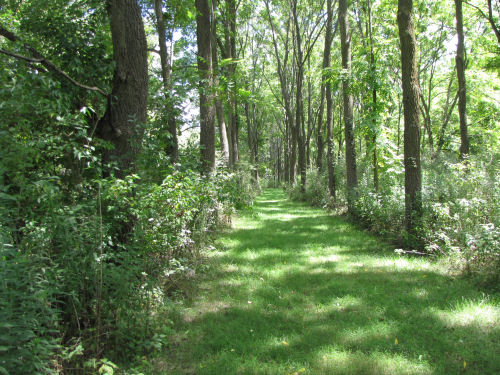 Despite how hard-packed the ground is, the trail is practically riddled with woodchuck holes. They can actually be dangerous, they are so large. I managed not to step in any of them, and I also got to see one of the occupants. He (she?) was pretty darn relaxed! Of course, when I got very close... POP... down the hole! 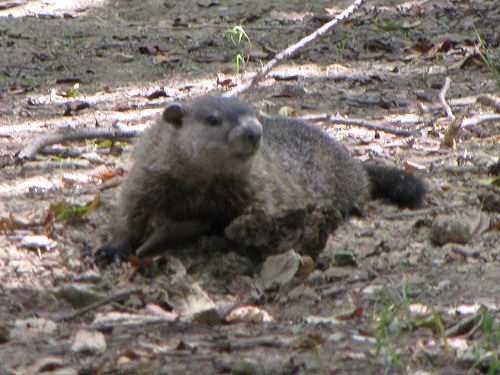 By mid-afternoon, I was crossing near several homes in Texas. Yes, I had now walked from Florida to Texas. 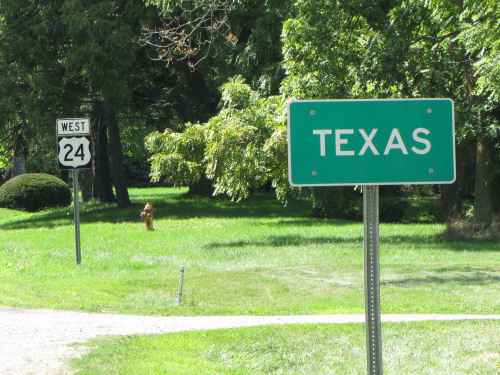 One of my favorite sections of the late afternoon was beneath these Osage Orange trees. They always create eerie fairy-tale-like openings when planted in a row. 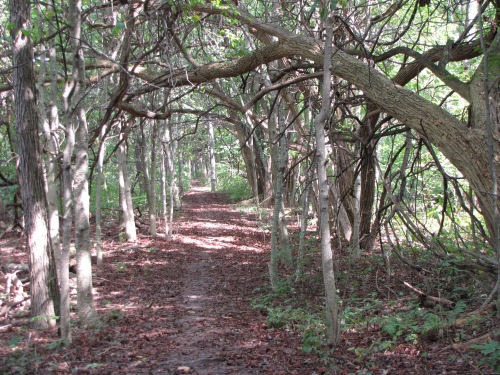 The afternoon heated up quite a bit, reaching 87 degrees, but only the last half-mile of walking was out on the road in the full sun. Not bad. I finished by 4:30.

I tried to drive the approximate route to measure it, since this mileage wasn't on the map. However, I discovered there is a new 4-lane highway, the new US 24, that is almost ready to open, which parallels the same route. However, it means that you can't drive right along the river for the distance any more. My best guess is that I walked between 12 and 13 miles.

I did manage to end up in another town which had an ice-cream place. For just $4 total I had a coney dog and a dish of delicious Buckeye Bits ice cream.

I was perfectly happy to spend the evening reading in my tent, and I fell asleep when it was barely dark. Day two was a success.

he or she, does look so cute! love to walk that path too....I love the sound walking on dried leaves make...

Further reading tempted me to try following you.

I had a dream.

Walk from Florida to Texas in one day? Now that is a hike! The more of your photos that I see and the more of your accounts that I read the better I understand why.

For me, walking 12 to 13 miles would sure FEEL like I walked from the state of Florida to the state of Texas :) Those trails do look really nice though

kulasa- thanks for stopping by! Woodchucks are quite calm, but they can devastate a garden. Out here in the woods is a good place for them.

rainfield- you can expand your adventures

Chuck- sounds like you started reading NCC, although I suspect you know me better after this weekend

Ann- one should build up to having confidence of walking that many miles in a day.

Amazing view I just here about USA Nature & environment it looks beautiful thanks for sharing this helpful information.

The area through which you traveled looks so beautiful. I imagine it is very healing to the mind and body
( though I don't doubt you are left with some residual aches and pains to remind you of the terrain you've traversed ). The photos are just beautiful.