This post is going to have too many pictures. You'll just have to deal with it. I really want to show you what my recent three-day hike was like, and it needs that many to cover day one.

First, the logistics. Because I went alone, with one car, and no one to spot me each day, I had to spot myself with my bike. That means that I ride the bike one direction and walk the other, to get back to the car. Northern Ohio is quite flat, so it's not too strenuous a program (although I've noticed I'm not getting younger.)

Sunday was already tight. I drove from Chuck and Sylvia's about three hours to Napoleon, Ohio. There I located a park which was on the trail, and set about getting my bike ready. That just meant tightening a loose nut on my rat traps (toe cages), and checking the tires. When I pumped up the back tire I heard "hisssssss." Uh,oh! It got better or worse when I wiggled the valve, so I knew the hole was right where it met the tube. I had patches with me, but with a hole at that location, you might as well save your time and sanity and get a new tube.

I quizzed a young woman on an apartment porch about where I could buy a bike tube on Sunday. She had no idea. I realized she needed better direction, so I asked if there was a Meijer or Wal-Mart. That did the trick. She gave me directions and I bought a new tube. I admit to forgetting to take any pictures of the replacement in progress. I just needed to get it DONE. That whole project made me even an hour later than I already was. But finally the bike was locked and ready to leave. 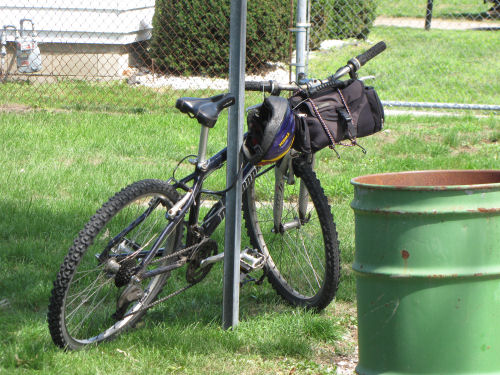 Then I drove to the small town of Florida. This was where I had taken my first steps on the Buckeye Trail, in 1995. Since a few readers own my book, North Country Cache, I'll tell you that tale is told in Chapter 9, "Buckeye Beginning." (This blog post is more like a hiker journal entry. I'd just like to clarify that my book about my hikes does not slip into this blow-by-blow event format too often.)

I duplicated a picture I took all those years ago, as a milestone of sorts. 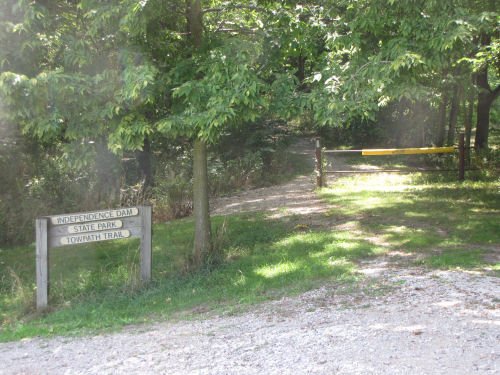 In this shot, looking west, the old Miami-Erie canal is to the right of the towpath trail and the Maumee River is to the left, although neither show in this shot.

But Sunday, I turned around and headed east. Now, a few of the miles I am walking this day are also North Country Trail, but when I did this section in 1995 the NCT joined the Buckeye Trail at Florida, Ohio.

The towpath heading east was shady and pleasant. Here's a typical shot of the sort of trail I saw. Where the ground falls off to a ditch at the left is the old canal. All those trees have grown up since it was abandoned. 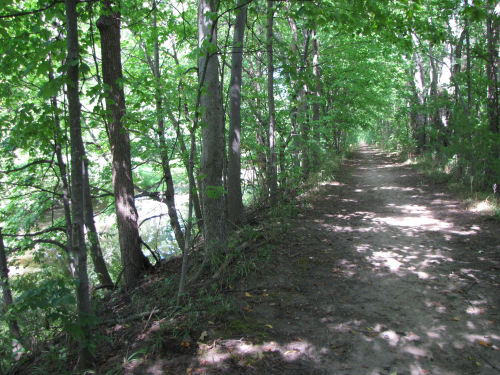 I only had 8.3 miles to walk, and that was a good thing because I didn't get started until 3:10 pm. But I stepped right along and called Marie, my usual hiking buddy, to tell her I was hiking, and missed her.

Toward the end of the day's miles, as I approached Napoleon, there was a stretch through a city park. You can see how close the river is. Within this city, no trace of the canal remains. 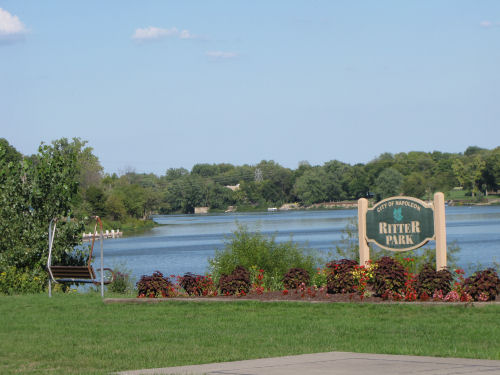 Before long I was just a couple of blocks from the handsome Henry County Courthouse. Napoleon, Ohio is also the city where I stayed at the Augusta Rose Bed & Breakfast when I gave a program about my adventures in 2010. 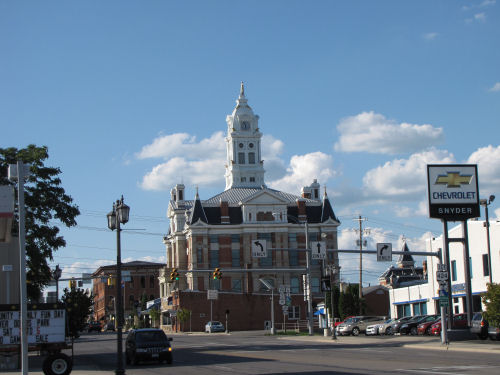 Then I was at the bike, and only had to ride back to my car! There was still plenty of light, so there were no safety concerns on that score. The next piece of business was to get to Mary Jane Thurston State Park and snag a campsite.

There were no problems accomplishing that, and soon my favorite and familiar little blue home was all set up and ready for me to crawl into. I confess to not feeling like cooking. I bought some ice for the cooler and a tuna sandwich caught my eye. It was a tasty dinner. 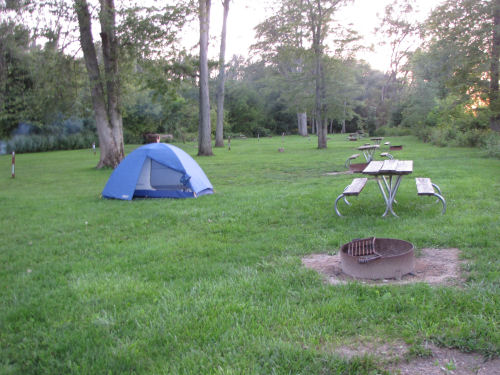 Sunset on the Maumee, the banks of which were maybe 30 feet from my tent, was a lovely ending to the day. 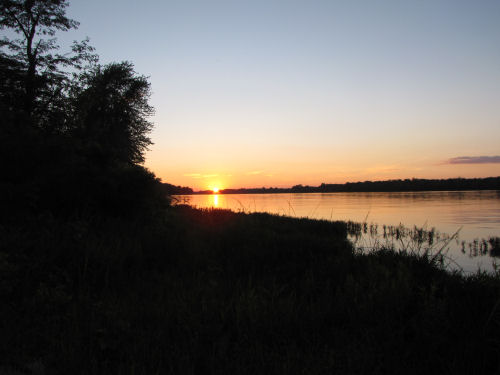 You are amazing! I admire your stamina, and pics! :)

You certainly know how to fill your days to the full mark. I'm sure it appears easier here on the monitor screen than it did when you were living it.

And only you who are able to do this.

I agree with rainfield, you are amazing. I can't see myself doing all of that by myself. Not to mention I think I would be too chicken to spend the night alone in a tent.

Glynis- I just put one foot in front of the other!

vanilla- yup, I did tomorrow today

Chuck- Except for the tight timing I ended up with it was a pretty easy day. No lost trail or difficulties finding things

rainfield- Oh... lots of people do things like this. Maybe not so many of my age and gender, but so what?

Ann- that's interesting. What's frightening about being in a tent?

What a great trip! I love the solitude, but then friends can always be rung up with that cell. (I love technology, don't you?)