Friday, at the NCTA conference, I chose to go on a tour of several facilities that bear the Kellogg name. The conference was held near Battle Creek, "Cereal City," where Post, Kellogg and Ralston all make cereals. Post and Kellogg were the first two, and the men and their companies were huge rivals.

Our first stop was the Kellogg Bird Sanctuary. The emphasis is on swans and ducks, with a number of rescued birds of prey which can never be released, but are kept for education.

Several families of trumpeter swans nested, and these were the youngest cygnets, a late brood. 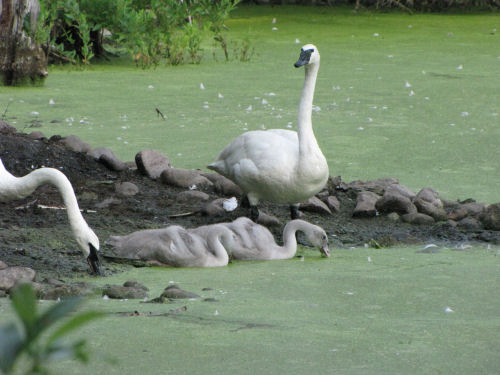 It was very interesting because although these are not exactly tame birds, they are very comfortable with human presence. I'd never been so close to any swans except the mute swans, which have pretty nasty dispositions. People are allowed to buy corn and feed the trumpeters. We were told that a couple of the birds will eat from hands if they are in the mood. I had to try that! What fun! 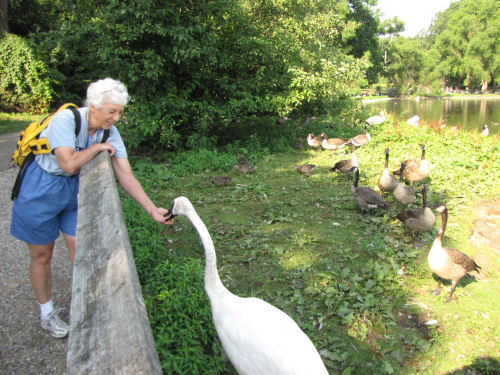 They also keep some black Australian swans. I may have seen some before at a zoo, but never so close. I like how ruffle-y their wings look. 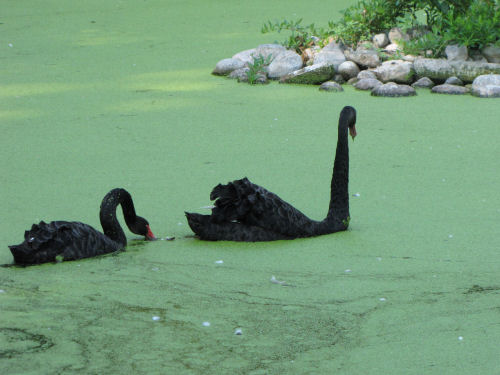 After the bird sanctuary, we hiked a couple of miles to the Agricultural Station. It's connected with Michigan State University. The item of interest there is a robotic milking parlor. The cows come in to the barn on their own because they are fed measured amounts of grain. While they are getting this treat a robot washes their udders, and plays laser tag with the teats until it can connect. It was rather strange to watch. Meanwhile the computer reads the cow's ear tag so it knows how much milk that cow usually produces on each quadrant, the quality, how much to feed her, and other data.

We could only see the business part of the operation. Maybe that was to prevent the cows from seeing all the people and getting upset. So far, there aren't many of these systems in the U.S. They are very expensive. 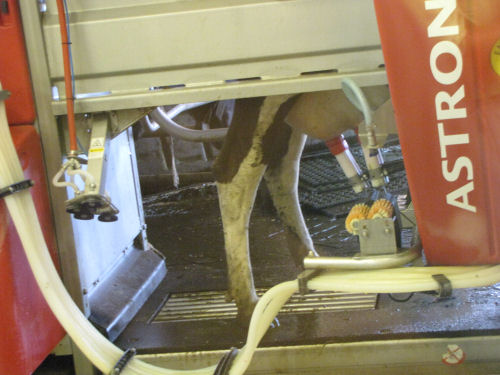 Our final stop for the day was the Kellogg summer manor house. It was impressive, and our guide knew lots of interesting stories about the family. 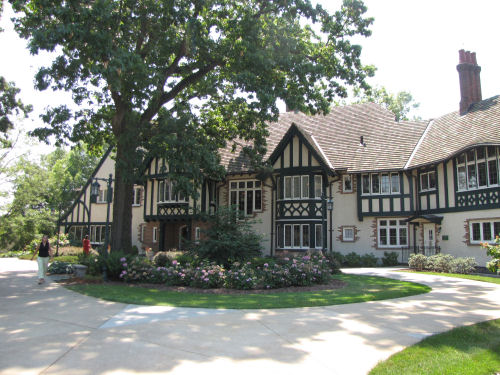 We got back to the resort in plenty of time for me to get cleaned up and get my head together, because I was the keynote speaker. That evening, I gave my program about my completion of hiking the NCT. This was the quintessentially perfect audience- people who love the same trail I do, and put in tremendous amounts of time to build and maintain it. Talk about a "high" for me!

Today was reality. I pulled a muscle in my back this morning. My desktop computer isn't done yet (went for a memory upgrade). I have a huge pile of assignments for the week due on Friday, blah, blah, blah. Nevertheless, the conference was awesome.

Love black swans. Great pictures of the trail birds. Loved your other posts too. You certainly worked hard on the cabinet, and painting projects. Where do you get your energy from?

But those Canada geese want a treat, too. Seems you had a wonderful day culminating in a great experience with the NCTA audience. The little glitches? So that we'll keep things in perspective and appreciate the good things even more.

A couple of years ago, Sylvia and I with a group from church had a luncheon followed by a guided tour of W K Kellogg's Manor House, Eagle Heights. It is a beautiful place in an even more beautiful setting.

What a fun adventure. Swans are such beautiful creatures. The house is very german looking.

WOW! What a great adventure! Those swans are lovely (and HUGE!) and the grounds look incredible. And to end the whole thing as the guest speaker??? WOW!! :)

Glynis- I'm fresh out of energy for a couple of days. Hopefully I'll be recharged soon.

vanilla- geese? You mean the flying rats? Not my favorite

Chuck- We were really quite close to you weren't we?

Steve & Vickie- Thanks for stopping by! I believe it's called Tudor style

Lin- the swans were quite large. Their feet are like ping pong paddles!