There will be two posts today. First is an explanation of why there have been no posts for three days.

As you heard, if you checked in with Duck and Wheel with String, Secondary Roads, or String Too Short to Tie, you knew that we had a bloggy party thingie. But that's not what this post is about, except that it's where the oops started.

The blog picnic was the first (and wonderful!) stop on a long weekend that moved from Chuck's house to Ohio for some hiking.

I was exceptionally clever, and tucked all my electronic extras into one handy little bag: my AC cell phone charger, my car cell phone charger, and a cute little toy on loan from Verizon- a WiFi hot spot which we have on trial to see if it will work for us. I was going to blog each night after hiking- taking you "with me." That would also allow me to test the little gadget away from home.

Next, I cleverly left the whole bag at Chuck's house. Quite a moment of panic Sunday night after taking the car apart twice and no bag... At least I'd been good and locked the car every place I'd been all day, so I knew prayed it had to be at Chuck's. (I thought I must have dropped it while loading the car.) But I didn't know Chuck's phone number. And I don't know how to call directory assistance from a cell phone. Actually, it's been so long since I've used it on any phone, I couldn't remember how. We used to not use it on a cell phone because it was so expensive.

So, I called home to have Om find Chuck's number, wondering how long my cell phone battery would last. I'd made several calls during the day. Om wasn't sure about finding it. I called Marie. She was in bed. I talked her husband into looking up the number for me. Meanwhile, I kept telling these people to call me back because I couldn't just hang on the phone indefinitely with my battery bars dwindling!

Om got the number first. Yeah, Om! So I called Chuck, and sure enough, the bag was there. But I'd never gotten it anywhere near the car; it was sitting on the corner of the desk I'd used there. (Then Ed called me back with the number, too- thanks, Ed!)

Instead, I got to spend more time with Chuck and Sylvia on the way home. (The only complaint about Saturday's event was that it was WAY too short.)

However, there were no more phone calls over the weekend, and no blogging.

So, I stayed Tuesday night with my new "real life" friends. It appears that we were just supposed to spend more time together. They loaded me up with goodies from their garden. 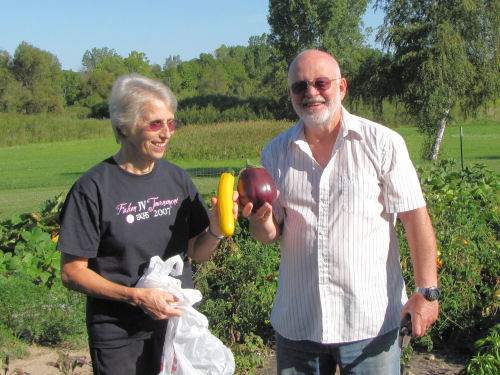 And they live close enough that I should get to see them more often than a once-a-year blogger picnic.

From their garden to my kitchen (and this is only a small part of their generosity). 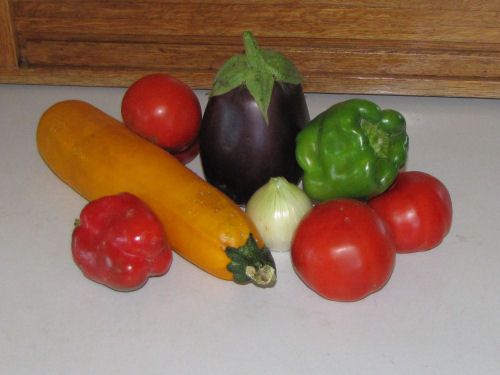 Here's what I did with some of the bounty. 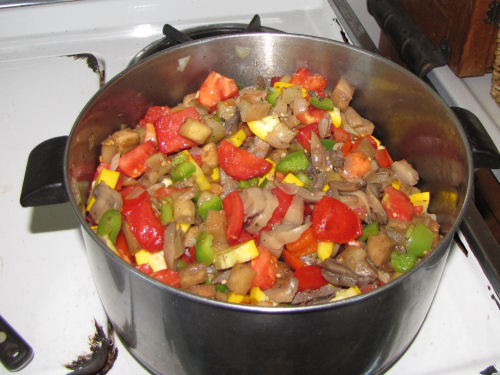 Chuck told me of your visit and I was certainly jealous that you got the chance to visit again! I wish we had more time too--I would have liked to just sit and talk to you, Sharkey.

If you are short on battery life, try texting if you can. It doesn't drain the cell as much. I believe you can text to a house phone as well--they receive a robotic voice at their end.

Let's do it again, pally. And this time, let's make sure we have more time to visit.

All's swell that ends swell; and it is swell that you retrieved your possessions, garnered more garden, and extended the visit with Sylvia and Chuck! Glad you made it safely home. It was great meeting you, and Lin, and Chuck and Sylvia.

Looks like you guys had such a great time!!

Sylvia and I were on the line with our younger son when your call came in. Usually we would have let your call go to voice mail, but the number looked a bit familiar so we answered your call.

Thanks for not reporting on being pressed into service chopping peppers as Sylvia prepared a batch of salsa for canning.