This was going to be another long day with 12.3 miles to do, but I knew it was going to be nice trail, probably with more to see than the day before. It began with the bike ride, longer than the walk so that I didn't have to take busy US 24 except for the last two miles. I put the car in downtown Waterville and rode back to the Lock.

I did have to walk those same two miles along US 24, but I was soon at Grand Rapids. This town is one of my favorite Ohio places. Just to the east, at Kimble's Landing is a reconstructed canal boat, the Volunteer. 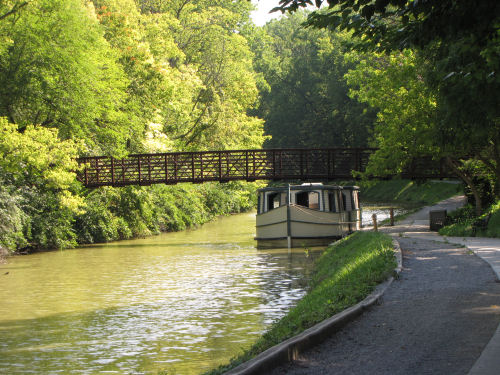 This day, it was just resting peacefully. But Wednesdays through Sundays it will carry passengers to the Ludwig Mill at Grand Rapids, which is still operating. I won't fill this post with details about the attraction. I've done it once, and hope to do so again. Very authentic and educational!

The trail here is well-maintained. Although the canal soon becomes a dry ditch again, the Maumee River is close on the other side. This section must be more shallow. The day before I saw boats using the river. Here, the herons and geese had it to themselves. 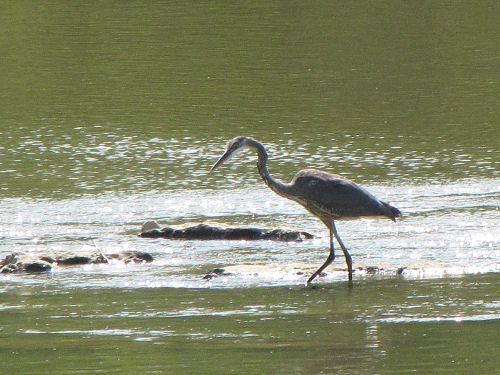 One landmark where I rested was in a pavilion at a spot known as Bendview. The map said it is known as the best view along the Maumee, where the river makes a near 90 degree bend. It was nice, but the day was hot and I wanted to finish, so I didn't stay long.

The third day of a hike is always the hardest. By then, everything aches. The fourth day, you begin to toughen up. True to form, I was tired and sore and weary. However, there was a nice change of pace about to come my way. Resting on the next bench was a man who had passed me earlier when I was eating lunch. We decided to hike together for a bit.

It turns out that he is a pastor named Larry from the Cincinnati area. He knows Steven Newman, the first man to walk around the world, and Bill Irwin, the first blind man to hike the Appalachian Trail. I've also met both of those hikers. He asked me quite a few questions about what I was doing, and I found out that he lived in Michigan for quite a few years. We found things to talk about for the rest of the way to Waterville.

That was a great way to end the day. Instead of spending the final four miles quietly whining about sore knees and feet, heat, and just wishing to get to the car, I was given a cheerful companion!

Along the way we passed by Roche de Boeuf, a famous Native American meeting place. The bridge was built for a railroad, which destroyed part of the rock. 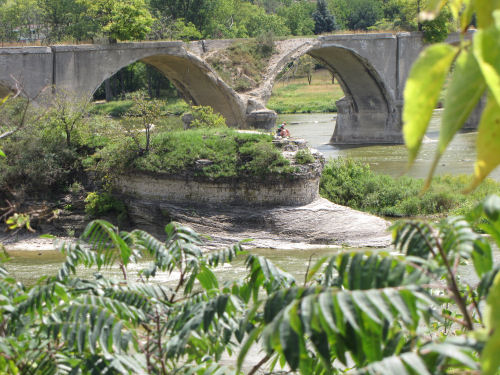 At 2:30 I parted company with Larry. He headed to Subway, and I went to my car. I have to admit that one of the very best things about day hiking is that I can enjoy an ice-cold Diet Coke at the end of each day's walk! 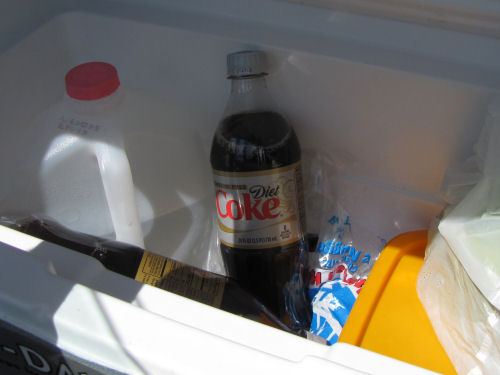 With no further ado, I hopped in the car and headed for Chuck & Sylvia's to pick up my electronic accessories. They had invited me to join them for dinner if I wasn't too late, so I didn't fool around.

Total miles walked in three days: 33. Buckeye Trail section completed: Defiance. Sections yet to do: either 4 or 7- I have to find out which loop is the official one. Each has about 50 miles in it.

Thanks for joining me!

Everything aches, that is for a short term.

Well done. You were blessed to have an interesting companion to take your mind off the weary bones through that last four miles!

I believe I now understand. Memories can be sweeter for the pain. Proof that you are an over-comer, and how sweet is that?

Did I fail to mention that sometimes we wait until 8 PM to eat our evening meal.

How nice that you had someone to do part of the hike with you. You must be exhausted

rainfield- you have it exactly!

vanilla- I was indeed!

Chuck- well, yes, I thought I needed to be there by 6 or 6:30, but I didn't speed or anything much. And if the accomplishments are too easy the memories aren't as sweet

Ann- I think I'm all rested up now! Didn't like the past two hot humid days, but this week is supposed to be nicer.

How fun to meet up with another hiking buddy! Sounds glorious and a wonderful trip. Plus you had a great start to the event and a surprise ending at Chuck and Sylvia's house. Can't imagine it gets better than that.

It must feel great to accomplish a hike like that. These days, I barely make it a block. The other day, I couldn't believe my eyes, when a peacock strolled by and I had left my camera home, something I so rarely do. I could have kicked myself.

How amazing to meet such an interesting hiking companion. I always prefer company.