What I have to show you today could be classified as fooling around, experimenting, practicing, trying to learn the pitfalls of something I've never done before. So it was fun, but it has a purpose. Yes, it's related to the trailer project.

Of course the whole prooject part of the day started with the usual unsatisfactory shopping excursion. Among other snafus, I thought I wasn't going to be able to get the resin locally. The place I was told carried it has discontinued it. However, I made some phone calls and found it in Ludington.

Here's what I did. I cut two 4" squares of plywood (not very straight, but it doesn't matter too much for this), and sanded them pretty well. Then I painted them with some white paint I had on hand. Hey, you've seen it before! It's the gallon I still haven't used up from the undercoat on the well pit project. (Here's a bunny trail about that paint. I got it at the Habitat Re-store a few years ago for only $5 a gallon. When I first used it, I learned why. The smell is SO bad I couldn't stand being anywhere near that room for several days. But using it outside isn't too bad.)

So, I painted these blocks with the white as a background color. 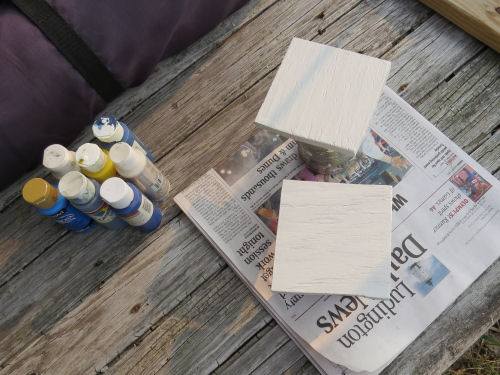 When that was dry, I started fooling around with acrylic paints. Not really trying to do anything in particular, just making patterns. Here's what I ended up with for now. 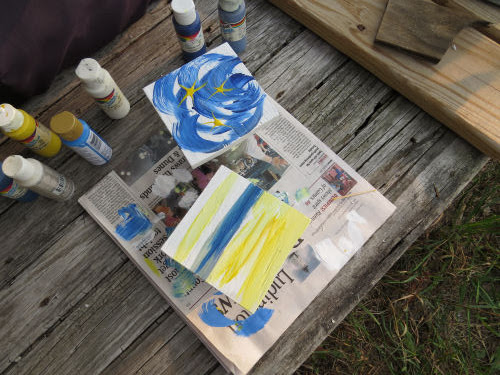 Then came the experimental part. I'm learning how to do poured epoxy resin. This is the first thin coat. Unfortunately, you can't really see much difference in the picture without the resin and the picture with. When it dries, I'll be able to get a different camera angle on it that will show it better. Anyway, I got a start on learning how to work with this. 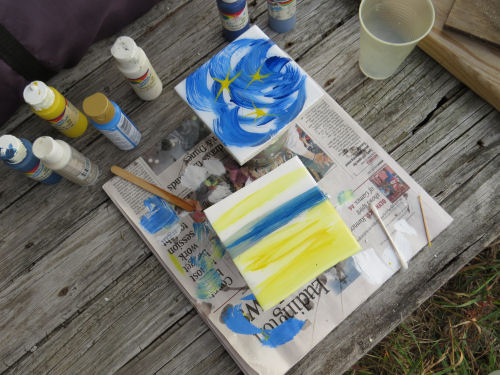 In other news: I edited hard all morning, and managed to finish one part of a project. Then it was shopping, and when I got home I worked on the trailer - not ready to show you that yet, and did this resin. That took up the whole rest of the day. Nothing is done, but I made progress on several pieces of the puzzle.

Sounds like a fun experiment. I look forward to hearing about the results

The epoxy resin has a strong odor too, right? I used it once to make a craft.

Ann- after what I did today, those efforts are almost junk.