Today, a fairly new friend, Monica, and I hiked 6.5 miles. We did a combo of North Country Trail, bushwhacking, and 2-tracks to make a loop and then we added a short out-and-back tail to make it a little longer.

We went to the Ward Hills Fire Tower site. I learned a couple of new things about this. For one thing, this is not only the highest hill in Ward Hills, I think it's the highest base elevation of any of the fire tower sites in the Manistee National Forest. I had assumed that would be either Udell or Red Bridge tower sites which are farther north in a hillier location. But this one is at 1160 feet, and Red Bridge is only 1101. Udell's base elevation is only 1000 feet. This was a 100-foot tower and was built by the Walhalla CCC camp. It was dismantled in 1972. Now you can only see the footings.

I hunted for the benchmark, but I've forgotten exactly where it is. Another reason to go back there. It's a site I like, even though the views are mostly grown in. The best part is the foundation of the keeper's house. I haven't been able to find out a lot of information about specific towers, but this is the only one I know of that had a house provided. 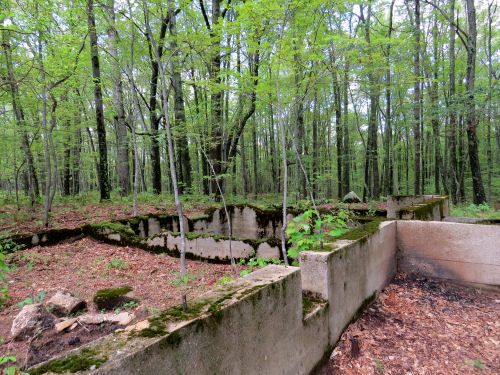 I didn't take a lot of pictures. We were doing quite a bit of visiting. But I did snap one of my favorite bowls in this section. The trail snakes around the rim 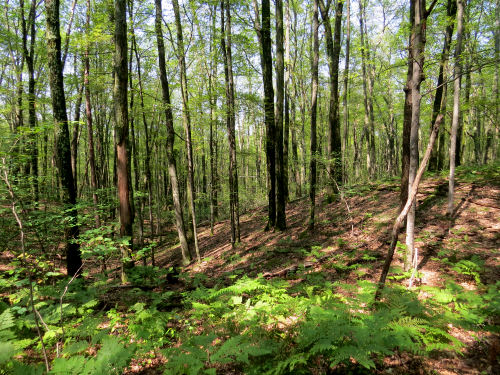 This log was rimmed with a little orange fungus which contrasted nicely with the moss. 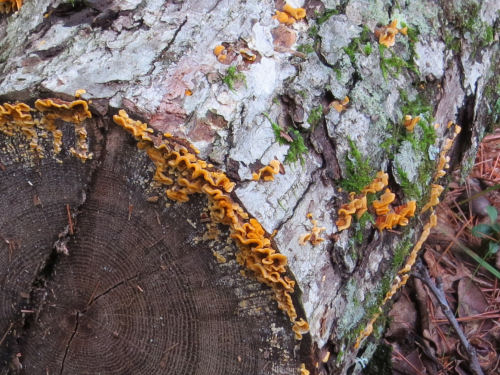 Another nice find was some Angel Wings fungus. Supposed to be edible, but I haven't tried it. There has been some conflicting evidence on its edibility. I'll stick to the ones I'm certain of, thank you. 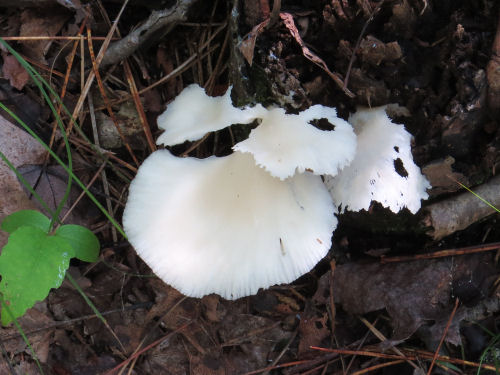 Anyway, we hiked 5.25 miles on the NCT, and another 1.25 on roads. Hoping for more hikes with Monica!

In other news: I edited, I wrote a chapter, I had a meeting this evening, and did a teeny-tiny bit on the trailer.

Lulu: "Hmm, that keeper's house looks like it's a bit of a fixer-upper these days ..."