Critters of the Day


Today was very springlike! And yet, we are supposed to get several inches of snow tonight. If we do, I can ski a bit, but I couldn't let the nice afternoon pass me by.

So, I went to Gale's Pond, where Ellen took me for my birthday two years ago. By the time I got there, it wasn't sunny anymore, but it was still mild.

There were a lot of geese and ducks on the lake. The geese were totally serene. They swam a little to move farther away from me, but never flapped a wing. 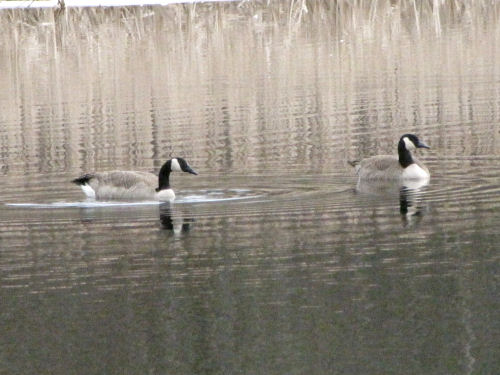 On the other hand, the ducks- all mallards, very common- were nervous as could be. Every time I moved down the trail they would quack and quack and fly off to some other part of the pond. 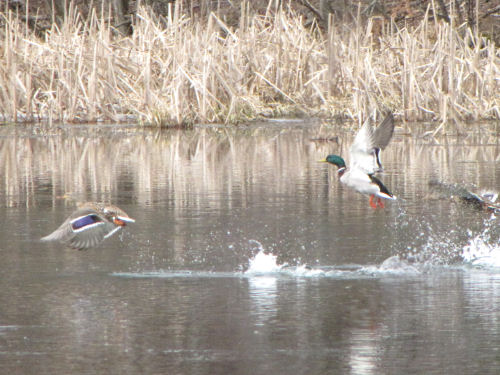 But, for me, the very best sighting of the day was someone a bit unexpected for February. The chipmunk does hibernate, but will occasionally wake up on mild days, so that must be what happened today.

This is a cousin to the 13-Lined Ground Squirrel, but not the same animal. 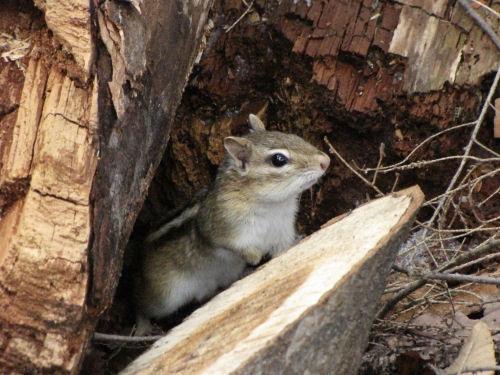 The Eastern chipmunk, Tamias striatus, likes to burrow under rock piles or jumbled logs, etc, while the 13-lined ground squirrel digs burrows out in the open like a prairie dog. I love the chipmunks! (But they always seem to look worried).

I always enjoy your walks with the camera. Great action shot on the ducks.

With the economy doing what it has been doing, maybe Mr Chipmunk is worried about his 401k.

I love chipmunks too. I especially like when their little cheeks are full of yummy treasures they have found along the way.

vanilla- thanks- I have a lot of useless tries, got lucky on one!

Chuck- that's it! what happened to the market while he was napping?

Lin- this one was probably in need of finding one of his stashes for a snack before going back to bed.

some nice sightings, especially the cute little chipmunk.
we are under a lake effect snow advisory until 7 tonight.