Long day. Waaaaay too much shopping, including a shiny new phone. That might sound like a positive thing, but it's just a bunch of new stuff to figure out and I don't find it all that fascinating to struggle to use a piece of technology that I don't even like. Anyway.

The best thing about today was getting another chapter done in Dead Mule Swamp Druggist. I blogged about that at Joan of Shark

But I haven't had a chance to show you the ring around the moon from Saturday night. The rainbow appearance doesn't show well in the photo, but the colors were very clear in reality. It's called a halo and is created when there are ice crystals in the upper atmosphere. 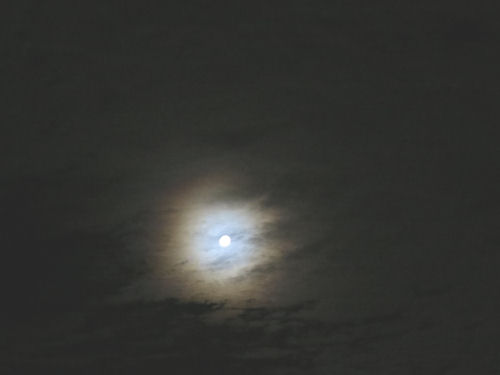 Tonight, Jupiter is happily frolicking with the moon. That was fun to watch Jupiter pass the moon in their race across the sky.