This will probably be the last post about the Fort Wayne Home and Garden Show. But I saved this for last because it's something I've always wanted to see. OK, not a burning bucket-list goal to chase, but I have been very curious, and now I've seen the real deal. It's Twiggy, the water-skiing squirrel! 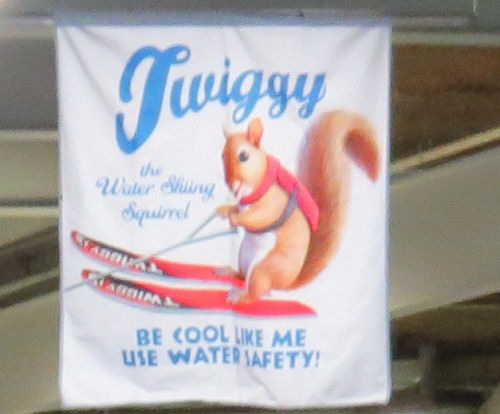 This year is Twiggy's final tour. The handler said she'd be doing some shows near home base, but they've been traveling with the squirrel(s) since about 1980, and I think the humans are more tired than the squirrel.

The lady in the blue vest lifted Twiggy from her cage. This was directly in front of me, so I got to see Twiggy snuggle in, and then go for a little excursion around the inside of the vest. 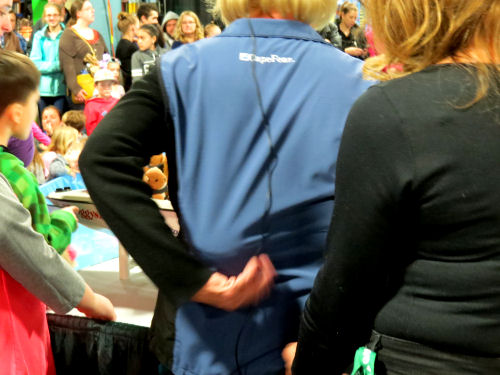 Here's some of Twiggy's story. The first Twiggy was rescued in 1979 when she was orphaned after Hurricane David. She became a family pet, and then someone dared the lady's husband to teach the squirrel something crazy... like water-skiing. Apparently he was a guy who couldn't let that pass, and thus was born a phenomenon!

They take advantage of the novelty to promote water safety to kids... thus Twiggy's little life jacket. They talked about learning to float and how to be safe around water.

If you have concerns that the squirrel is stressed by all this, I don't think you need to worry. This does not look like a stressed animal! 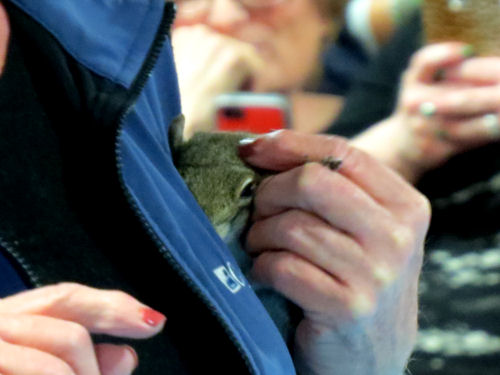 So, the "skis" are a little platform with toe holes and a bar to hold on to. The rig is pulled by a remote control boat. It goes fast enough that I only got one picture in focus, and this isn't it. But at least you can see the whole set-up in this picture. The crew in the boat is stuffed animals. 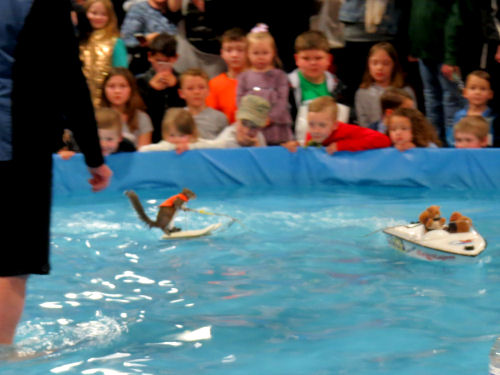 She put Twiggy in the water, so the kids could see that the squirrel can swim. She swam fast to the skis and climbed on board, no worse for the wear, except her tail was wet and heavy and drooped in the water after that. Here's my in-focus shot. 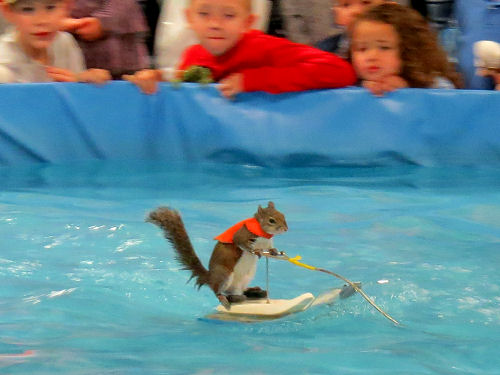 What can I tell you? It was fun. The squirrel seems to think it's fun too- she didn't want to get off the ski. Gray squirrels can live up to 20 years in captivity, but even so this must be Twiggy number 3 or 4. (There are probably several squirrels all trained at the same time, now.)

In other news: work, work on taxes, work on book formatting, back to work tonight. See you tomorrow!

Well there is something I've never seen. That would be pretty cute to watch