I finished weeding the front flower bed today and got out the hoses and watered everything because that rain we got turned out to be almost nothing at all.

I'm really happy to have this garden all weeded. At one time, I had a several garden beds, and my rock garden, and plans for even more. I liked to get freebies, but at that time I allowed myself $100 a year for plants. Now, I feel decadent if I spend $20. (I spent $14 yesterday.) I won't show you the picture of the rock garden in its prime yet again. I miss that the most. It's really gone to pot. Even when I was younger, I could not keep on top of all the flower beds I had going. But I really would like to have that big and wonderful of a garden.

I will show you a few things out front that look good right now. This is the Fleeceflower, Bistorta affinis. I really don't like this plant much, but it was free and it's happy and spreading, so it gets to stay. Today, it sports a common Silvery Blue butterfly. When it flies, the upper sides of the wings are bright blue. 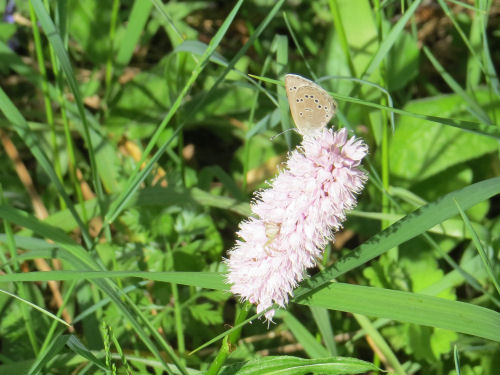 The Ajuga repens, bugleweed, is blooming. It would like to take over everything, but I'm trying to keep it under control. It was also a freebie. Yes, there is a baby white pine in the middle which I will move later. 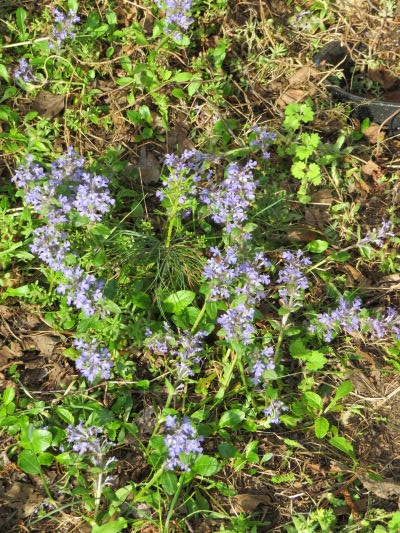 Next up we have dwarf Solomon's Seal, Polygonatum humile. It is so happy in my garden, it's in danger of choking out everything else. Hmmm. I don't want that either. Some will have to be moved or leave. It was a gift from Ester. 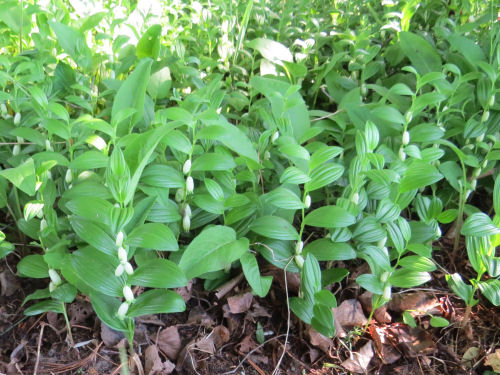 And last for today is another freebie. Actually, I just plain stole this one. I took a tiny tiny clump from the edge of a city planter. It has spread to a decent puddle. The city dumped the planters at the end of the season and never looked back, so I don't feel guilty at all. This is a yellow-green hosta. I don't know what actual variety, but I like the bright color. 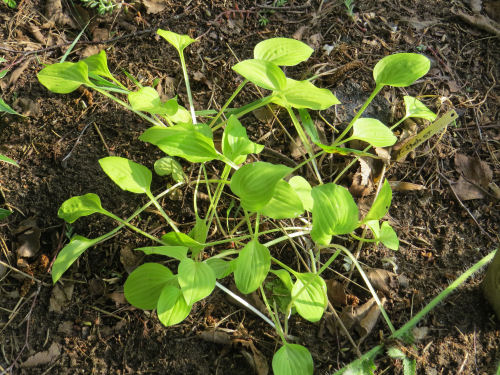 You can see the sort-of-theme is that I did not pay for these plants. Actually, most of the plants I bought for this bed have been killed by the deer or died. Makes me nuts.

In other news: I flitted from job to job accomplishing little, but staying busy. Worked on hike food and did laundry.

Oh, and we have a baby woodchuck and baby squirrels. Haven't caught pictures yet. Fun, but hungry.

Free plants are the best. I like that when touring my garden the gifted plants remind me of the people they came from.

Free is my favorite price. If I had the talent for it I would have flower beds but I hate weeding and I'm just no good at planting things.