Let's do some general discussion of the trail I just hiked. Here's the elevation profile they publish.

Now, let's be honest about this. Sure it looks awful. But remember that the scale is always goofy on these. The baseline is 44 miles long. The total height is under 550 feet. But even stretched out a bit, it still looks impressive.

Compared to the Finger Lakes/NCT in western NY, these trail ascents and descents are not as high. There you can go down/up 700-1000 feet several times in a day. These changes are only in the range of 300-400 feet.

However, this trail is almost universally in relatively poor condition and constructed with too-steep grades. Here is a typical ascent. Instead of moderating the grades to make walking and maintenance easier, they installed steps that wash out when the water runs down. The steps are too high for all but the Jolly Green Giant. There is loose stone on every grade so you constantly tend to slide, making balance difficult. I took 4 falls. Didn't get hurt on any of them, but it's difficult to get up with a full pack at an awkward angle. One was from a turned ankle (just a fact of life with me- that was on the level), once I slid on loose rock. Once I tripped on the rebar end sticking up where it was holding a step, and once I was snagged by a greenbrier. 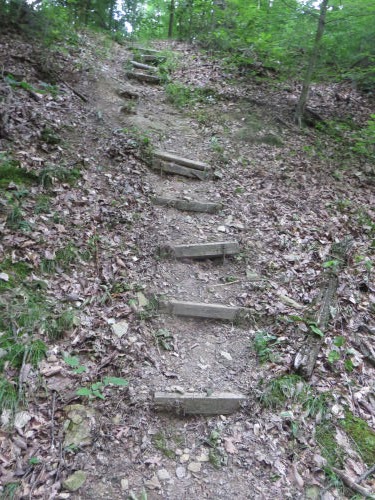 Then there is the issue of water. I always found some, but I'd call it a trail with water insecurity. I DID know this ahead of time, and chose to take my chances with "seasonal streams" since it was only mid-June. All of my water sources were nearly dry streams like this one with a pool at the edge. These pools were very clear, and I did not ever need to pre-filter to remove sediment or debris before running it through my actual water filter. The rocks were damp and cool. On the hottest day I lay in the cool rocks for half an hour to get my temperature down enough so that I thought I could keep walking. 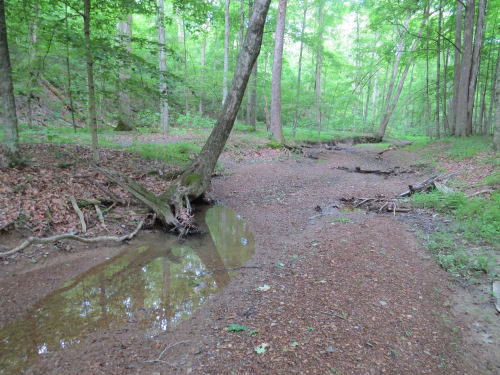 However, you can see how wide this water channel is. When they do have water there, I think there must be too much. There was one bridge on the trail. All the rest of these crossings would be fords when water was flowing. There was evidence of spring flooding in many, many low places on the trail. The soil is clay- all the water runs off, and it gets slippery. So, I think if you have water, you don't get safe footing.

There were a number of ponds that were described as reliable water sources. Here's what the very best one looked like. This is only mid-June. I'd have to be in dreadful need of potable water to even consider filtering this. To be fair... they do encourage people to do water drops at road crossings and trailheads. 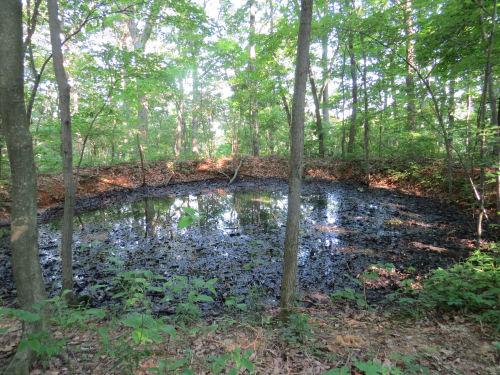 I chose to carry more water, so when I had all my bottles full, I had 5.5 pounds of water. That's a lot.

Now, let's talk about fitness. I've decided that I was completely fit to do this hike. I haven't been sore at all. OK... I have one 72-year-old knee and one hip that give me a twinge now and then. But NO actual sore muscles. I'm a little surprised myself. So, I have to conclude that what did me in was the heat and humidity.

Ellen (with whom I am staying now) and I took a 4-mile walk on a level rail trail this afternoon. I have to say that I wondered what we were doing out there in the heat and humidity, even with no backpack!

Except for the first two relatively level miles, and the final two really level miles of the Knobstone, I did not ever manage a pace of even 2 mph. That is pretty slow, even with a backpack. But I kept having to stop and catch my breath, which is really unusual for me. And of course you are going slow uphill. I also had to go slow to keep my balance going downhill. It was simply difficult when the air is basically wet and hot.

And then there was the poison ivy. I'd been warned that the ticks were awful. Meh. The ticks were there, and I dealt with a couple and flicked a few more off my pants, but they were no big deal. For me, who is highly allergic, it would have been good to know ahead of time that there is so much poison ivy it is absolutely impossible to stay out of it. Washing often was not an option because of the water issues. I have an awful lot of itchy patches, but so far not enough to send me in search of medical treatment. We shall see.

I don't want to just badmouth the Knobstone. It is clearly a trail for people who want a physical challenge. It's lush and green, and there were birds, butterflies and wildflowers. Any trail is better than no trail. But it's not going to appeal to most casual hikers.

I'll show you more of the good stuff in the next few days.

Those steps look like they could be tricky.
I used to love heat and humidity but I've noticed over the last few years that I just can't handle it like I used to.