I'm home! Really tired, but will do a post before I crash. Today I'll tell you about some of the more unusual displays. First is an entry in the Ikebana contest. Ikebana is a Japanese flower arranging style that is very disciplined. This one didn't really seem to me to fit the form, but it certainly is unusual! 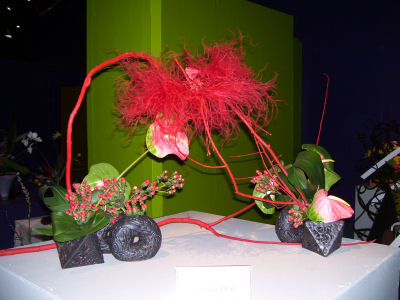 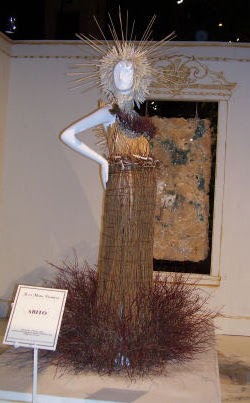 There were a number of categories devoted to fashion- remember "Belle Italia!" I didn't take any pictures in some of the groups because I wasn't sure how my batteries would last. Now I wish I had taken at least one in each group to show you. There were shoes decorated with plant material. There was a long display case of jewelry made from plant material- I heard people who like jewelry saying that there were really nice pieces there, whereas the shoes were more whimsical. There were hats, that might conceivably be worn- most very stylish! There were dresses too, and they were certainly not something people would actually wear, they were just art. Here are two examples. 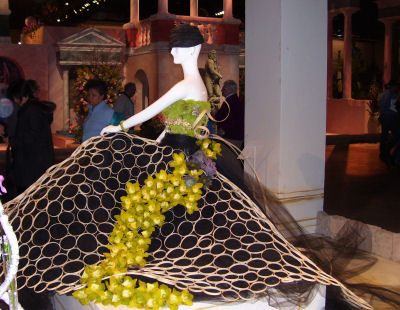 I liked the display where the next picture was taken. It was "Under the Sea." There were posters with mermaid or merman legends from around the world. These creatures were recreated with plant material. It was all lit in shimmering blue with a blue ceiling and floor, and decorated with shells, seaweed, etc so it all seemed to be underwater. The picture is of a sea-horse. Notice its tail instead of back legs! 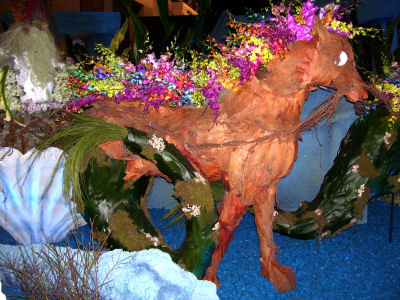 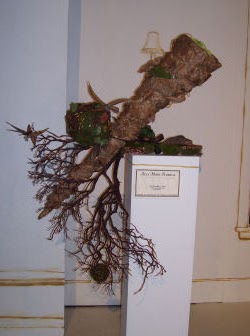 Finally for today I'll show you a construction- again made from plant material. I never did figure out if these were some particular class of entries in the competition, but I liked this one, so that is its claim to fame.

The dresses look like things Ginger might wear at a Gilligan's Island fashion show. The picture that stood out for me was the sea-horse. All of them were interesting.

Amazing stuff. I can't wait until my kids are a little older and could handle going to an event like that in my area. I would be afraid for the exhibits with my two children in the building... :)

Hi Ratty- One of the neat things about a big show like this one is that they have space and local talent to have lots of out-of-the-ordinary things. Some are weird, but I like the creativity.

Julia- I understand about the kids. Now that the Philly show has added a Family Room that was a nice option. The girls we took are 4 and 6, and do well with events like this. But they had a great 2 hour break seeing animals from the zoo, playing games and more hands-on kid stuff. Then they came back and finished seeing the show. Of course their dad stayed with them in the playroom, it's not a drop-off childcare.