My Bluebird of Happiness


Days when the air is cool and the sun is warm are just to my liking. Today was such a day. And on the morning walk I heard and then saw a bluebird.

Very recently I purchased a new camera. I certainly wanted one, but wouldn't have put it on this year's priority list. However the death of my Pentax SLR and the increasing unreliability of my digital point-and-shoot made the purchase imperative. I'm definitely on the learning curve of using it. 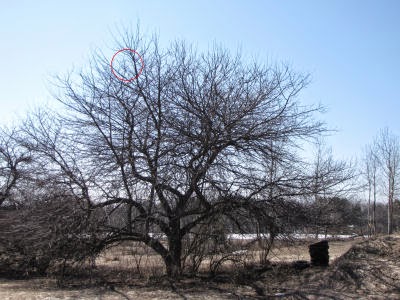 So, that bluebird flew to the top of an apple tree. I decided to see what the camera would do just on AUTO, since I don't know how to do very much else yet! I went back out later and took a picture of the tree from about the same place I was standing. I've circled the approximate place where the bluebird was. 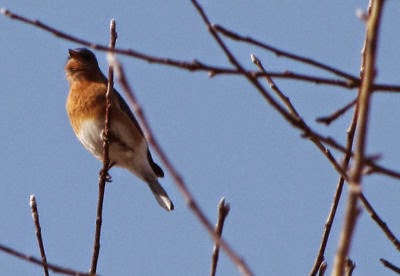 Most of the pictures were blurry. It's really hard to hold the camera steady enough at that amount of zoom. But I'm quite impressed at how these two came out. The camera should be able to do even better when I learn how to do manual focus, and it would have helped if I had been set up with a tripod or had even thought to steady it on my walking stick. 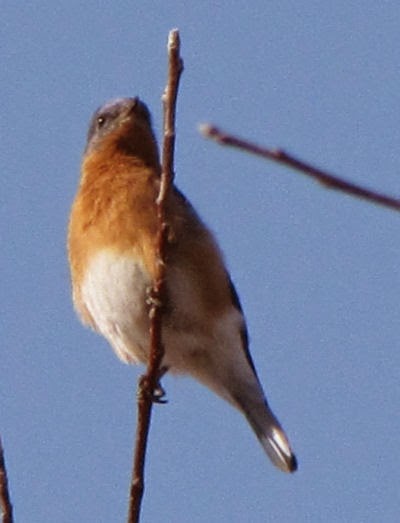 It was in the 50's today. I hiked in shorts and a sweatshirt! Can it almost be spring?

Lovely birds indeed. Your camera did a good job to capture its eye. I love the feeling to look at it.

Hi Solomon- At this angle you can barely see the blue. But when you are "flashed" by that blue back in the sun you will never forget it! The only blue bird here that is brighter is the indigo bunting, but they are seen less often.

Bluebirds were on the brink of extinction 30 years ago, but a grass roots effort to provide nesting has brought them back.

Rainfield- Thank you so much! This time it was pure luck. I took a lot of pix and got a couple. I hope to improve the skill part of the equation.

That's a pretty good distance to get pictures that good. I usually have to sneak in a lot closer. I've been learning to prop my camera up on anything that will hold it steady. That way I don't have to take very much time.

That is probably the first good look at a bluebird I've ever had. I just never used to pay attention.

Hi Ratty- Hi praise from you! Oh, I wish for a bluebird for you- up close, singing, and shining very blue in the afternoon sun!

Nice! We don't get bluebirds here, but I do have a bluebird house in the yard....just in case. :) We had a flock of orioles come through once--it was such a treat. We are on a waterway, so we get birds who stop by for a day or two and move on. Love to watch the birdies--and I'm finding so does Hobbes.

Lin- No bluebirds? Where the heck are you? That is sad.

Vanilla- Thank you! If they stick around and nest maybe I can get some pix that show the blue parts better.

Wow, your zoom is fantastic. It's going to be amazing seeing your pictures.
Yes, I think spring is on its way at long last.