Recently the word "subnivean" has come into popularity to describe the layer under the snow where a number of creatures live, protected during the winter.

The picture on the left was taken on February 11, and the one on the right, today. You can see how, when the snow began to melt it uncovered where a mouse/vole/shrew (some creature of about that size... could be any of those) had dug through the matted grass and even scribed the tunnel into the dirt. You can seen how well-packed their groove is because it's basically unchanged six weeks later. All that's different is that the grass has dried out and fluffed a little bit.

The picture below is a closeup of how the tunnel looked in February, so you can tell how smooth and formed it is... a tube for little furry bodies! 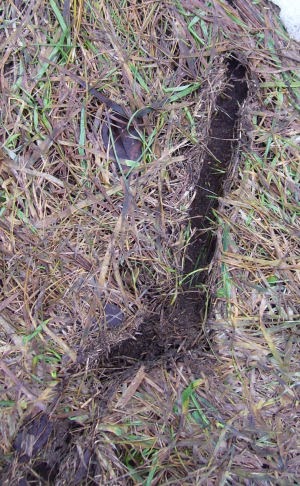 I decided to use this today because I hiked a longer loop and came across this remnant of a subnivean apartment house! The small amount of heat generated from the vegetation under the snow melts a small air gap and keeps the temperature there very close to 32 degrees once there is more than six inches of snow overhead. Well, we were over that for most of the winter! 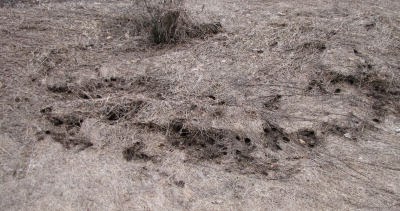 The mice used the looser grass on this small embankment to create living spaces underneath. Look at all those little doors! I've put a closer shot below 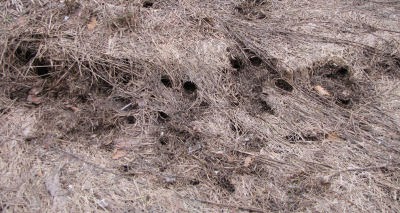 See Mouse Antics for tunnels seen from the top side of the snow
See Mouse Builds an Empire or a Maze for some wonderful pictures on the Huckleberry Days blog which I just found today!

I've been seeing rodent holes in the ground lately too, but I usually just walk by them. It's things like this that give me a new perspective on things like that, and make me remember to stop and look next time.

Great write up, glad I found you too, love your photos of the tunnels.

Amazing to find rodents hole on the surface. It is rare to be seen here.

Hi Ratty- I seem to just zero in on details like this. You are still exploring the big picture. We are both explorers of the world!

Hi Huckleberry! I think your tunnel pictures with all the branches are remarkable. I haven't seen any like that. I wonder if mouse make one kind and voles make the other?

rainfield- Haha... you have to have the 6 inches of snow for extended time to get the subnivean community, so NO, I don't think you see this!