A Mystery in the Road 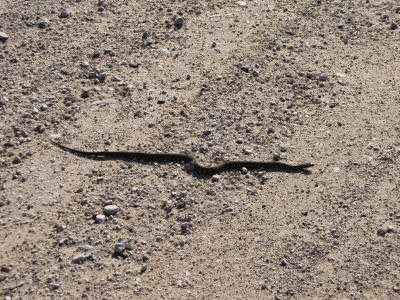 As Maggie and I were walking yesterday, this snake was sunning itself in the dirt road. Now, don't get squeamish and leave... snakes are really fantastic! And this is the first one I've seen this year.

So I went closer, and found myself quite mystified. There are only 17 kinds of snakes in Michigan, and I know most of them. Only one is poisonous, is rarely seen on this side of the state, wouldn't go sunning in the middle of a dirt road, and I know what it looks like anyway... this isn't that one (Massasauga). 16 non-venomous choices left.

Not a Green Snake (duh!). Not any of the 3 garter snakes, because they have linear stripes. 12 choices left. 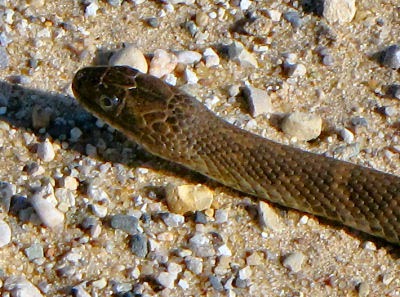 Notice its long slim profile and small head. Very sleek looking! It was about 20 inches long. Sleek eliminates the Hog-nosed Snake (or puff adder), a truly ugly snake that looks poisonous, and it hopes really hard that you will think so! Size eliminates the two with red bellies, the Red-bellied Snake and Kirtland's Snake because they are both small, and um... have red bellies. 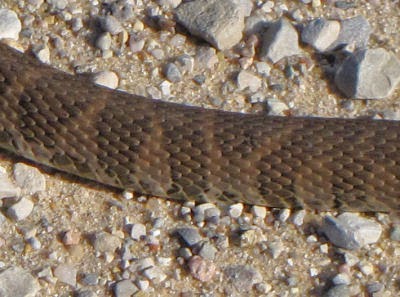 It's not a Northern Water Snake, although the banding is similar. But they have a much more blunt head and tail, are fatter, and are found in the water. They might venture out on a grassy bank, but not to the middle of a bare dry road.

Not a Milk Snake, they are really gorgeous with a brown and creamy pattern and a distinctive Y on the back of the neck. Not a ring-neck snake... no ring.

I contemplated the possibility of a Rat Snake. They have a faint patterning on their sides, but they are usually closer to black and also are thicker, not as slim.

I was running out of options! Actually, those were all the snakes I could think of, standing there in the road, without the snake book, and not remembering that I was counting down from 17. How many have I eliminated now? ... eleven. 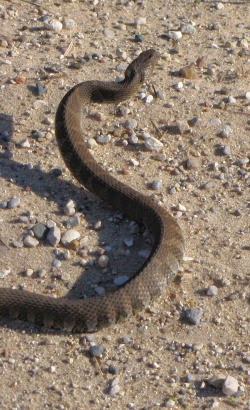 So, I took these pictures, and told the snake that it was going to move out of the road. Almost all snakes in Michigan are in trouble... and many, many are killed in the roads. It wasn't happy with my decision. I used my stick to gently move it off to the side, but as you can see, it took umbrage and raised itself up in protest (no attempt to strike... it just wasn't happy). But it did head off to the grass.

When I got home and got out the book, boy did I feel stupid! Have you Michiganders figured it out yet? That slim shape is the biggest clue. It's a juvenile blue racer!

Now I already knew that they don't turn blue until they are a couple of years old, but I've never seen one this big that still had the juvenile patterns. The tiny baby ones are brown and white checkered! And blue racer fits with the jumpy temperament too. Blue racers can be trained to be calm with careful handling, but they tend to be jumpier than garter snakes.

I only feel so stupid because the blue racers are one of my favorite snakes. Here's a picture of a different adult sunning itself one summer day. 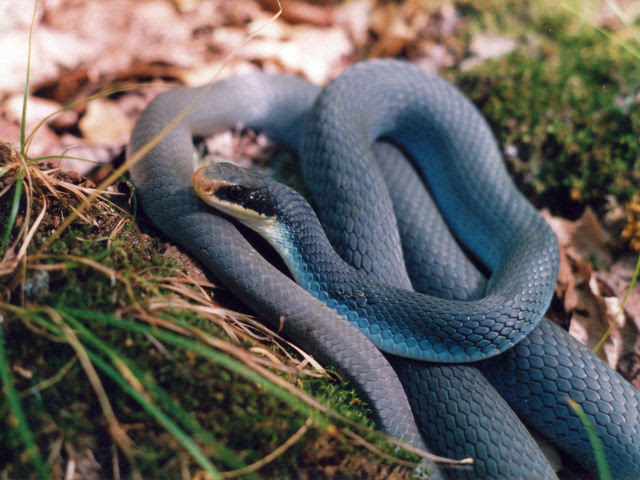 Note added April 2015: Since making this identification, I have found a young Northern Water Snake sunning itself in the middle of a dirt road. And I've learned how to really tell the difference, but you have to look at the belly, and there are no pictures of this snake's underparts. However, the ID may still be correct. If you look at the third picture, it looks likes the stripes don't continue unbroken around the body, but are breaking up into blotches. That would be consistent with the blue racer. Other than that... it could be the water snake Nerodia sipedon.

He is beautiful! I liked the one where you could really see the stripes on his sides. I love snakes too. I am teaching the kids to not be fearful and just be respectful. We do have rattlers here, not on our immediate property but in the hills so we have to teach common safety. But I really think the kids get excited now when we have a snake that needs to be moved at home. The come running to me in a frenzy and we go move a snake to safer grounds, out of the way of our driveway.

So glad you got this great puzzle and photo op!

Unfortunately, I don't see the photos on your blog. And I want to see them! I haven't seen a blue racer in years. Maybe I just don't get out enough?
-- Chuck

Julia- I sure hope he/she stays out of the road and survives, but so many of them get flattened this way... it's sad

Chuck- The pix are there! Try shift reload to force it to get new copies of everything.

Terrific photos. I love going on adventures with you!

After all these days, I started to think of getting some books on birds, flowers, trees .... with me.

I'm glad you posted this with the snake. I don't know much about snakes, except for the few I've seen so far. I just saw one the other day that I didn't recognize. I took pictures and used them to find out that it was just another garter snake. I've been extra interested in snakes since then.

What a beautiful snake! We had black racers in central Florida; they were fun - the dogs chased them around the back yard. Never hurt one, just chased 'em. ;)

Hi Cherlock! Thanks for the vote of confidence. I like showing people things in the outdoors, so that's a match!

Rainfield- Be careful or you will get a reputation like me of carting around too many pounds of field guides! (I say, go for it!)

Ratty- Don't be dismayed at "just a garter snake." I only learned a few years ago that there are several kinds of those. And they can often be picked up and studied at close quarters without much problem.

Funny you should mention snakes. The other day I went to a birthday party and the 7 year old birthday boy insisted that his pet snakes celebrate it with him at the park.

Thank you for your comment on my Stuttgart post. I hope your hubby enjoyed Stuttgart from years ago.

Nice snake tale. I go through about the same process with about everything I see. Nope, nope, nope, maybe, nope, ah, nope, Duh.

Now that is one cute snake. Something I haven't seen

AVCr8teur- We've had a number of pet snakes, they really are fascinating, clean, quiet... but keeping track of a pet snake at a park might be a trick!

WiseAcre- I don't remember blue racers as a kid. Are they in NY? A real snake person here in MI says they are really declining, so I sure wanted this splendid youth to get out of the road.

Chuck- were you ever able to see the pictures?